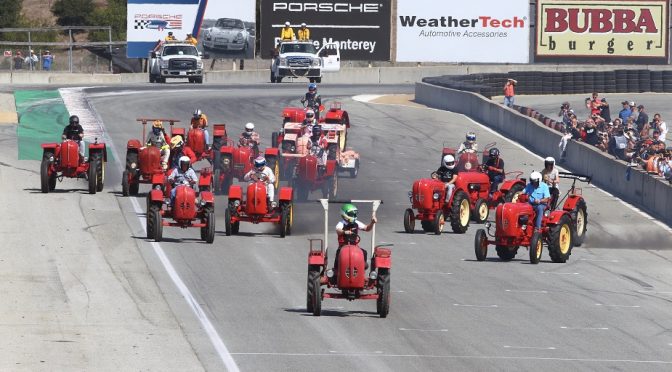 MONTEREY, Calif. – Porsche enthusiasts have arrived in droves to attend Porsche Rennsport Reunion VI to take part in a celebration of the German manufacturer’s seven decades of brilliance on the race track and the road. One standout on the third day of the four-day event had little to do with pushing the boundaries to go faster. The first-ever Porsche tractor race held at 1:15 p.m. provided levity with 17 tractors racing from the starting line to the Mother’s Polish bridge between Turns 4 and 5 from a Le Mans-style start.

Fans and enthusiasts were treated to both ends of the performance spectrum on a day where the Porsche 919 Hybrid Evo made demonstration laps with drivers Earl Bamber and Timo Bernhard that routinely exceeded 190 mph going through the speed traps. What the Porsche Tractor Race lacked in pure speed was accounted for in showmanship.

Porsche tractors were built between 1956 and 1963, with more than 125,000 produced.  Many are still being used today across farmlands worldwide. The 17 drivers ranged from factory professionals like Patrick Long and Patrick Pilet to celebrities like John Oats of the band Hall & Oates. Racers being racers, they jockeyed for position in the one-, two-, three- and four-cylinder open-cockpit machines. Long collected the win, and Cooper MacNeil was the hard charger of the group by finishing No. 7 after drawing the No. 15 position on the grid.