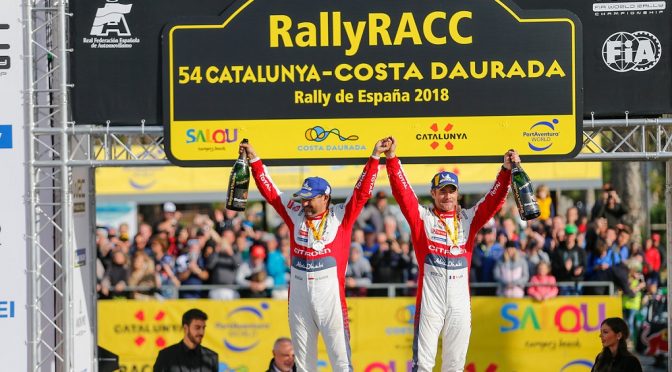 A bold and inspired tyre choice, followed by a majestic performance on the final four stages of Rally Catalunya saw Sébastien Loeb and Daniel Elena sweep to the seventy-ninth victory of their incredible WRC career. They also claimed Citroën Total Abu Dhabi WRT’s first win of the year in the process and its 99thin the WRC. Their victory equally means the team remains unbeaten in Catalonia for the second year running! Meanwhile, Craig Breen and Scott Martin finished ninth overall after finding some confidence behind the wheel again whilst Khalid Al Qassimi and Chris Patterson enjoyed their final of racing to the full, ending the rally in twenty-first place.

“It was an almighty scrap, right to the bitter end. When I saw that I had won on the display at the end of the final stage, it was a truly incredible feeling! It’s really nice to have managed to be on the pace again after all these years, because the guys haven’t stood still whilst I’ve been away and they really pushed hard every inch of the way. I couldn’t afford to drag my heels in getting my bearings back on the gravel on Friday, or on the wet tarmac yesterday either. We were quick this morning after making the right call on tyres and then we held on, despite a minor error on the penultimate stage. Right now, given how the rally panned out, I’d be tempted to say it’s perhaps my greatest win and I’m delighted to secure what is a richly-deserved result for the team.”