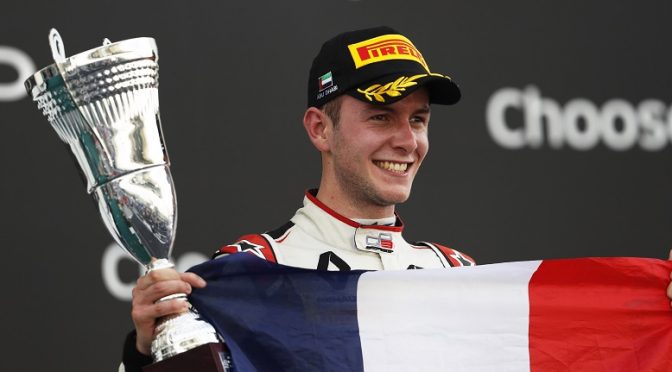 Leonardo Pulcini claimed his second victory of the season in fine style in this afternoon’s Race 1 at Yas Marina Circuit, fighting off an early challenge before powering all the way to the flag for a popular win, but most eyes were focussed a little further back as Anthoine Hubert did everything he needed to claim the final GP3 Series drivers’ title before easing off at the end to finish on the podium behind David Beckmann.

Temperatures were soaring as the lights went out, with poleman and title challenger Nikita Mazepin unable to match Pulcini’s glorious getaway: the Russian cut straight across to cover the challenge, and although Hubert made a strong start he was in no position to risk a move at turn 1 and fell into line behind the front row starters but ahead of Callum Ilott, who mugged teammate Jake Hughes at the first corner, Beckmann and Ryan Tveter.

Pulcini knew he had an advantage, and he played it almost immediately: the Italian outdragged Mazepin on the long back straight for the lead, with Beckmann copying the move on Hughes for P5. The Russian was not finished though, knowing that he needed victory to keep his title hopes alive, and he pushed Pulcini before outbraking for the lead at the marina on lap 4, but a slightly wide line at the hotel complex on the next lap allowed the Italian back into P1.

Mazepin tried the marina move once again on lap 6, but Pulcini was alert to the danger: the Russian went too deep and ran off, but in his hurry to restart the battle he missed the bollard around which he needed to rejoin the track, and the subsequent 10 second time penalty effectively ended his title run.

If the move meant that the front runners could focus on preserving their cars and tyres, further back there was more action to be had: Beckmann run through Ilott at the marina for P4 on lap 9, while Giuliano Alesi started his progression up the points by claiming Tveter’s scalp behind him, while a lap later Hughes repaid his teammate by outbraking Ilott for P5. Beckmann and Hughes squabbled over P4 for a few laps before the German could finally pull away and focus on the target ahead in the closing laps.

With the title in his pocket Hubert had no reason to fight too hard for P3, particularly as it was coming back to him at the end of the race, and gave way to Beckmann at the marina chicane on the final lap, but up front Pulcini was greeted by the flag some 8.6 seconds ahead of the German and the 2018 GP3 Champion, with Ilott hanging on for 4th and Mazepin, who was 2nd on the road before his penalty, was handed P5 ahead of a charging Alesi, who mugged Hughes on the penultimate lap, with Juan Manuel Correa surviving a late squabble for P8 and tomorrow’s pole with Simo Laaksonen and Tatiana Calderon.