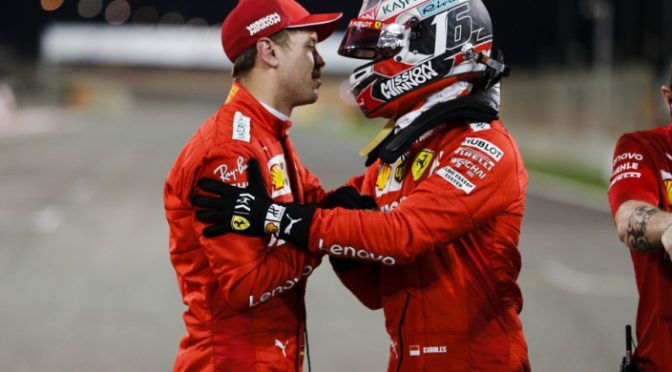 LCH GETS A WIN BOTTAS BACK TO #2 LECLERC RATTLES VETTEL!

Charles Leclerc’s hopes of a maiden win were crushed by a late Ferrari engine issue. The Monaco native was cruising home when he suffered a loss of power. That relegated him behind the Mercedes drivers. His podium was only saved by an even more remarkable double retirement that hit the Renault drivers three laps from the end – from separate issues – forcing the race to end under the Safety Car.

Hamilton claimed his first win of the year as a result, but issued a warning to Mercedes after the race that it has to work to catch Ferrari after seeing the Italian team’s strong pace all weekend.

Hamilton had moved up to P2 earlier in the race after a fight with Sebastian Vettel had seen the Ferrari driver spin as they tussled for position at Turn 4. The spin damaged Vettel’s tyres so badly that the vibrations saw his front wing get ripped free of his car later on the lap. He pitted and fought back to P5.

There was more woe for Ferrari too, as Sebastian Vettel – who himself had looked set to claim a podium behind Leclerc – spun while battling with Lewis Hamilton before dramatically losing his front wing down the back straight. He was left to fight back to fifth, behind the fourth-placed Red Bull of Max Verstappen.