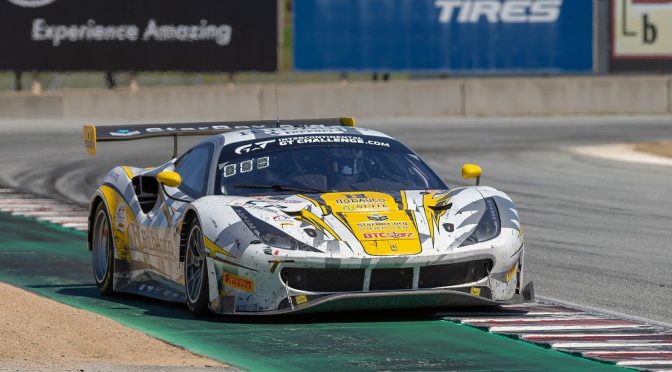 MONTEREY, Calif., March 30, 2019 – Track history was made during the 2019 premier event season kickoff to the 62nd year of racing at the iconic WeatherTech Raceway Laguna Seca road course. The Intercontinental GT Challenge California 8 Hours was the longest professional race in track history, both in duration – equaling the inaugural and second annual events – and in laps completed (327).

The thrilling race was completed without a single Full Caution Yellow, allowing for eight hours of continuous action from the grid of international GT3 endurance racing teams. The diversity among automakers provided further intrigue with five different manufacturers being represented in the first five positions on the leaderboard: Ferrari, Mercedes-AMG, Porsche, Audi and BMW. 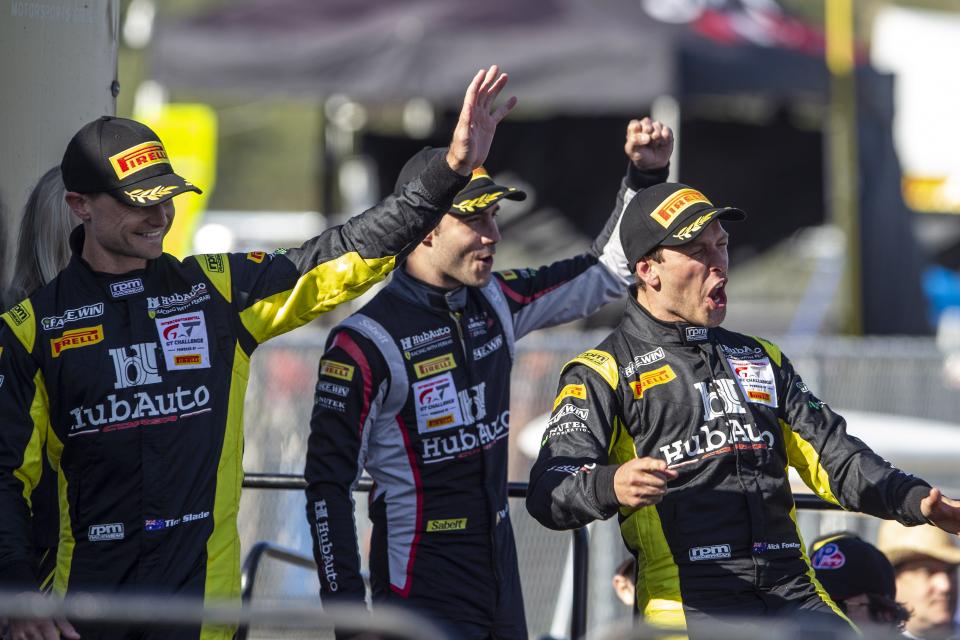 No. 27 HubAuto Corsa drivers Nick Foster, Tim Slade and Miguel Molina had an outstanding performance in their Ferrari 488 GT3 to win the event and earn the second win by Ferrari in the Intercontinental GT Challenge Powered by Pirelli series. Molina, who resides in Spain, set the pace in qualifying and teamed with his Australian co-drivers to dominate most of the race. With the lead well in hand, Foster broke the tires loose going across Turn 11 before making the win official at the checkered stripe.

“This ranks No. 1,” said Slade, when asked where this win ranks among his career accomplishments. “Nick and I drove opposite cars last year. I always wanted to team up together for a race. We’ve been friends for a long time, and he actually helped me get this ride. Miguel did an amazing job setting everything up. It was really special.”

The No. 999 Mercedes-AMG GruppeM Racing squad of Maxi Goetz, Maxi Buk and Raffaele Marciello charged hard to earn the second spot on the podium from the fifth row of the starting grid. Their effort padded Mercedes-AMG’s lead in the Manufacturer Standings.

The last remaining podium spot belonged to the U.S.-based No. 911 Park Place Motorsports team. With the other Porsche GT3-R of incoming points leaders Matt Campbell, Dirk Werner and Dennis Olsen retired with gearbox issues, the German brand was represented with a valiant effort by the trio of Romain Dumas, Mathieu Jaminet and Sven Muller.

No. 10 Audi Sport Team WRT, winners of the inaugural California 8 Hours in 2017, was the final team to finish on the lead lap. Dries Vanthoor took it home at the end for co-drivers Christopher Haase and Frederic Vervisch. Audi entered the event with an unblemished record following victories in 2017 (Team WRT) and 2018 (Team Land). Kelvin van der Linde, who was part of both previous winners, finished seventh with co-drivers Chris Mies and Markus Winkelhock in Team Land’s Audi R8 LMS GT3 Evo.

No. 42 BMW Team Schnitzer made for five automakers in the first five positions with the efforts of drivers Martin Tomczyk, Chaz Mostert and Augusto Farfus.