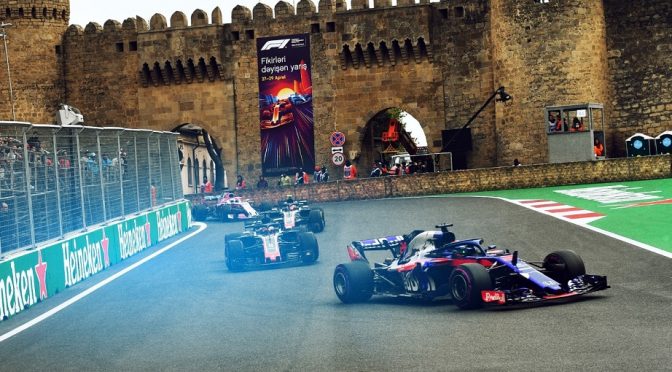 ANOTHER FRONT ROW FOR MERCEDES

Bottas beat LCH to top spot by just six hundredths of a second in a thrilling qualifying session for the Azerbaijan Grand Prix.

Mercedes took advantage of Leclerc’s dramatic crash to lock out the front row in Baku with Vettel only third on an evening to forget for Ferrari once again.

Leclerc had been the favourite to secure the front slot on the grid after dominating the weekend so far.

But after the 21-year-old put his Ferrari in the barriers, Bottas claimed the spoils with his final throw of the dice to beat Hamilton.

The Finn took his second pole in as many races with the sun setting in Azerbaijan’s capital following two crashes which delayed the running by almost an hour.

First, Robert Kubica hit the barriers at the narrow castle section, and then Leclerc did the same. The young Monegasque clipped the kerb at the left-handed entry to turn eight, and went head-on into the wall on the opposing side of the track.

“I am stupid, I am stupid,” he said furiously over the radio before hitting his car with both hands as he emerged from the cockpit.

John Elkann, the Ferrari chairman, is in Azerbaijan this weekend, and he shook his head in response to his new driver’s crash. “No excuses,” tweeted Leclerc, who is set to start from ninth providing there are no hiccups putting his heavily-damaged car back together.

“I’ve been useless. I will push to have a better tomorrow. Sorry to all the people supporting us and even more to the whole team that deserved so much better.”