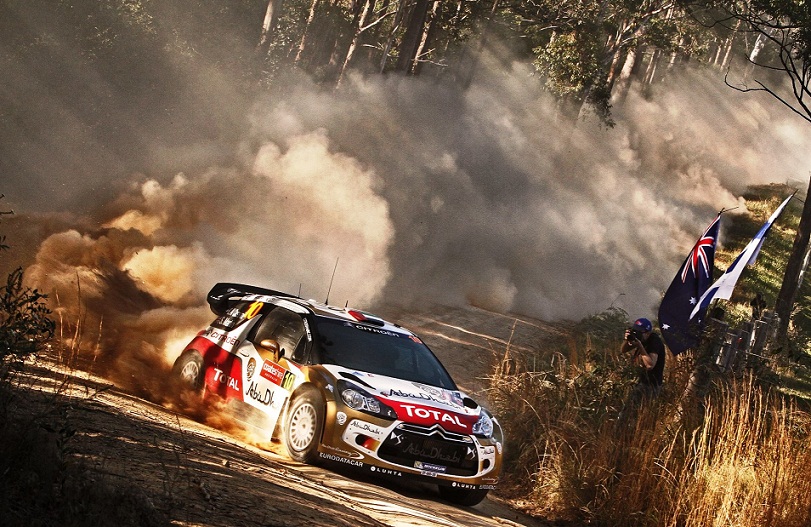 Sheikh Khalid Al Qassimi battled his way through a dust storm to make a solid start in Rally Australia today as the driver he launched into this year’s World Rally Championship grabbed the early limelight.

Partnered by British co-driver Scott Martin in his Abu Dhabi Citroën DS3, Al Qassimi recorded the ninth fastest time on the qualifying stage as the tenth round of this year’s WRC series ran into an immediate safety issue.

With thick dust churned up by the cars hanging among the trees and creating a visibility problem, the organisers bowed to pressure from the major manufacturers teams and extended the running gap between cars from two to three minutes.

The driver who appeared to be least troubled was Kris Meeke, who produced a stunning performance alongside Chris Patterson in his Citroën Total Abu Dhabi DS3 to win the qualifying stage from WRC leader Sebastien Ogier.

Meek’s flying start was no great surprise for Al Qassimi, who had nominated  the Northern Irishman to take his seat when forced to miss Rally Finland, and helped ensure he was rewarded for an impressive drive with another WRC opportunity this weekend in Australia.

Producing the perfect response on the 5.54km qualifying stage, Meeke later opted to start 10th when the opening leg leaves the Coffs Harbour base tomorrow morning, hoping to take advantage of the best road conditions.

There is no such luxury for Al Qassimi, who starts second on the road and has the unenviable task in his Abu Dhabi Citroen of sweeping loose stones from the gravel tracks which have been left dry and dusty by a long spell without rain in New South Wales.

With an outside chance of rain over the next two days,  the UAE driver is already prepared for the consequences based on his experience in Rally Australia two years ago when his fifth place finish was the best of his WRC career to date.

“If it rains again this weekend we could see a lot of drivers sliding off the road, which is exactly what happened in 2011,” said Al Qassimi.

Rally Australia was continuing with two evening runs of the super special spectator stage in Coffs Harbour, the coastal town located mid-way between Sydney and Brisbane