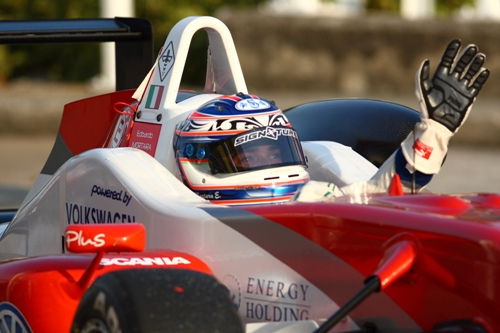 At the start of the race, Mortara claimed the lead from pole position. After the first safety car intervention which was caused by a startline crash, Daniel Abt (Signature) and Laurens Vanthoor overtook Mortara. The latter used the restart after another safety car intervention due to an accident of Daniel Abt to claim back the lead of the race. Eventually, 23-year old Mortara scored a safe win from Vanthoor, Bottas and Witmann. Fifth place for Renger van der Zande (Motopark Academy) was a good result for his team in its first participation in the Macau Formula 3 Grand Prix.

Edoardo Mortara (Signature): “Having made history with my second victory in Macau is a great honour for me. It wasn’t easy, because especially Laurens, Valtteri and Daniel were tough opponents. I had to give 120 percent and drive like in qualifying to pull a gap in order to prevent the drivers behind me from getting a slipstream.”

Laurens Vanthoor (Signature): “The second safety car intervention didn’t help me, because Edoardo was able to overtake me out of the slipstream. However, I am happy with second place, Edoardo was just too fast today. He has deserved to be in the history books now.”

Valtteri Bottas (Prema Powerteam): “I am especially happy for my team Prema and for Mercedes with this third place. My problem is that Marco Wittmann overtook me at the second restart. When I had finally been able to get my position back, Edoardo and Laurens were already too far away.”