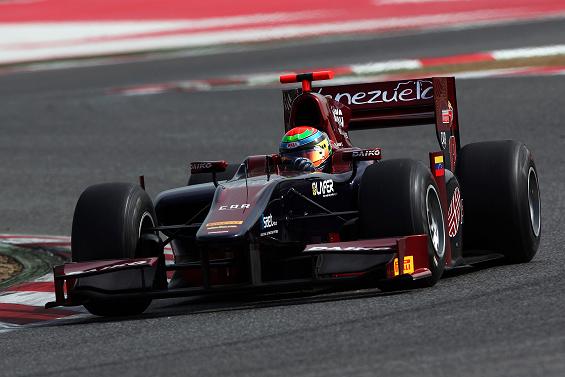 Fabrizio Crestani proved today that new team Venezuela GP Lazarus is already on the pace in comparison with the rest of the field after he set the quickest laptime of the day in the morning session whilst Max Chilton at Carlin was fastest this afternoon.

The three-day session opened in cool temperatures. Although most drivers took to the track early for their installation laps, it was a slow first hour with only six racers to clock in a laptime, Crestani being the quickest in a 1:30.271. As the temperature rose slowly, drivers went out for their first stints and Esteban Gutierrez was the first one to dip under 1m30s, one tenth faster than Chilton. But the Briton improved and bettered the Mexican’s laptime by one tenth of a second.

Halfway through the morning session, Giedo van der Garde took control of the timesheets with a 1:29.750, but with one hour left on the clock, Stefano Coletti went top, 0.037s faster than the Dutchman. Crestani’s efforts in the final thirty minutes were rewarded with a laptime of 1:29.420, two tenths clear from his closest rival Jolyon Palmer. In the dying minutes, both Julian Leal and Nathanaël Berthon stopped on track prompting a red flag. The session was not resumed and Crestani finished on top ahead of Palmer, Stéphane Richelmi, Rio Haryanto, Coletti, Davide Valsecchi, Leal, van der Garde, Chilton and Simon Trummer.

The afternoon session saw James Calado set the early pace. A first red flag interrupted the proceedings after Felipe Nasr ran a bit too wide and stopped in the gravel bed. At the restart, van der Garde went top and another red flag stopped the session following Fabio Onidi spinning at the exit of Turn 9. The remaining of the session ran smoothly. Coletti was the first driver to dip under 1m30s, but his laptime was bettered by Chilton. Carlin’s Briton set a laptime of 1:29.479 with one hour left on the clock. He stayed unchallenged until the chequered flag, Leal ending a shy 0.01s behind Chilton. Ericsson, Coletti, Calado van der Garde, Valsecchi, Gutiérrez, Johnny Cecotto and Trummer completed the top 10.

The F112 makes its debut at Montmeló

All the hard work has finally paid off today as the F112, the car with which HRT Formula 1 Team will compete this season, completed its first laps at the Circuit de Catalunya, in Barcelona.

Since the car passed the last crash test and was homologated, the team has carried out work shifts to cover 24 hours a day to make sure it could make it, for the first time in its history, to the first Grand Prix of the season having run previously.

The car was able to run after the team took advantage of one of the filming days available during the season.

The car made it to the circuit from Munich, Germany, just after one in the afternoon and the mechanics and engineers got straight down to business, working on relevant adjustments. It was a combined team effort, working against the clock, which saw its rewards four hours later when Narain Karthikeyan led the car out onto the track. Pedro de la Rosa, Dani Clos and Tonio Liuzzi were also present, as were Carlos Gracia, President of the Spanish Motorsports Federation and Salvador Servià, General Director of the Circuit de Catalunya.

The tests were carried out without any setbacks and the car carried out over ten laps. The team was able to check that the car functioned properly both from a mechanical and aerodynamic point of view as from a systems standpoint.

The team will prepare the necessary material in the upcoming days and head down under for the first Grand Prix of the season which will take place at Melbourne, Australia, in just two weeks.

Narain Karthikeyan: “Today was a shakedown of the F112 and I have had the honour to be the first driver to test it. The first impressions are quite good; it’s definitely a step up from last year. We couldn’t do any set-up work or stuff like that but everything seems to be working fine and there are no major problems so we can look forward to the season now. Everyone has worked hard and the new team management has put everything together in a very short period of time. They’ve done a proper job with the car and I’m sure that it’s a big step forward from last year, so hopefully we can take the competition to the teams we were fighting last year”.

Pedro de la Rosa: “Today has been a very special day because the car saw the light for the first time; Narain did some installation laps and then various times laps without any issues. This is very important, it might not seem like it, but any sort of mileage before Australia is vital to see that the car is in good conditions. From here it is our job to try and improve it and make it progress”.

Luis Péres-Sala, Team Principal: “I’m very satisfied today as it is a very important day for us because we were able to test some things out with the new car during this filming day. I’m very proud of each and every member of this team because everyone has contributed their little bit for this to be possible. Now we have to focus on Australia because we still have a lot ahead”.