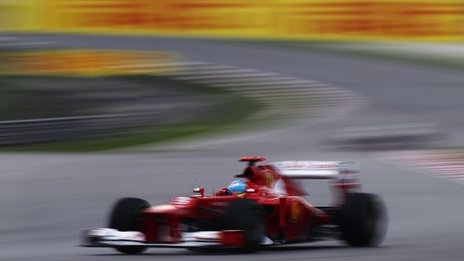 “Sun came up for extraordinary driver”

Alonso all the way. The Spaniard delivers a Senna/Schumacher style victory. No más palabras.

Fernando Alonso did it in the 2007 European Grand Prix at the Nürburgring and the 2008 Japanese Grand Prix at Fuji Speedway. Now he has done it again, this time in Sepang at the 2012 Malaysian Grand Prix.

The Spanish double world champion won a race he had no business winning.

Rain arrived shortly before the start and the two McLarens led the field after the safety car pulled in. Lewis Hamilton started from pole for the second race in a row. A slow pit stop, problem with rear jack, would allow Alonso to slip into the lead.

Jenson Button, the McLaren winner in the season opener in Melbourne, lost his chance of a second successive win after making contact with the HRT of Narain Karthikeyan and requiring a new front wing.

The track was drying but in the late stages threat of more rain returned. With most cars now running on intermediates teams pleaded with their drivers to stay on the track as long as possible.

While the red Ferrari of Alonso kept blazing away in the lead, the Ferrari-powered Sauber of Sergio Perez was running a strong second and then came the “The thriller in Malaysia.” 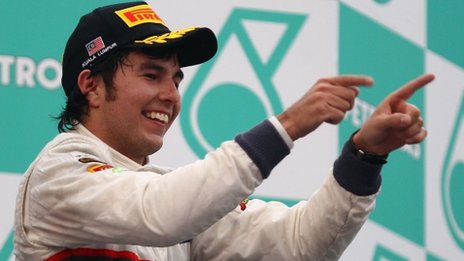 “I’m on a Mexican radio.” Sergio Perez was second and almost became his nation’s first F1 winner since Spa 1970 and Pedro Rodriguez.

The Mexican driver from Guadalajara started to gain on the Oviedo Oracle, and was looking a real threat to become his nation’s first F1 winner since Pedro Rodriguez at Spa-Francorchamps in the 1970 Belgian Grand Prix.

Perez came within striking and DRS zone and a change at the front was widely expected, but the dream was too much to be true. A slight error, after being told by team, “we need the position,” saw the Sauber driver run wide, giving Alonso much needed breathing room and allowing him to grab an improbable win, his first since last year’s British Grand Prix. 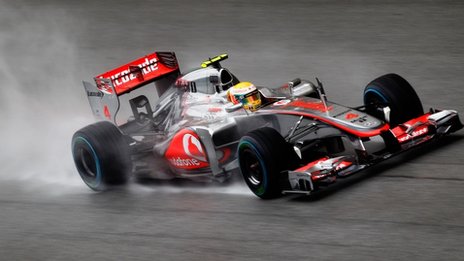 Hamilton in a hurry. Two races, two poles and two podiums. The 2008 World Champion trails ex-teammate by five points in the standings.

Hamilton, battling worn-out tires and another slow pit stop, made it to the podium for the second time in two weeks. He is now second in the championship behind his ex-McLaren teammate.

For the Ferrari team, with their ugly Prancing Pig, this was just what the Doctor and Luca di Montezemolo ordered.

The New York-educated lawyer was elated and quoted on www.ferrarif1.com saying, “I am very happy about this victory; today it rained in Sepang, but in the end the sun came out for us!

“Once again, Fernando drove an exceptional race, confirming his status as an extraordinary driver, from every point of view.”

Mark Webber was the only Red Bull driver in the points, finishing fourth over 17s behind Alonso.

The Ice Cream Man took his first F1 victory in Malaysia, 2003, and Sunday recorded the fastest lap of the race.

Kimi Raikkonen was fifth for Lotus and also set the fastest lap of the race.

Career high sixth place finish was recorded by Bruno Senna in his Williams.

Michael Schumacher, who started from the second row, claimed the final championship point from his tenth place finish; ahead of fellow German and defending race winner, Sebastian Vettel.

Kamui Kobayashi (Sauber) and Romain Grosjean (Lotus) were the only two retirements from the 56-lap race.

Victory also takes Alonso past 27 Grand Prix wins for Jackie Stewart. Schumacher, Prost, Senna and Mansell are now the only drivers ahead of Alonso, an incredible achievement for a driver who only started his F1 career in the early part of this century.

Sunday’s win has also placed Alonso at the top of the championship table with 35 points. Five points behind in second is Hamilton, he is five points ahead of teammate Button.

Round three is in Shanghai, the Chinese Grand Prix on April 15th.