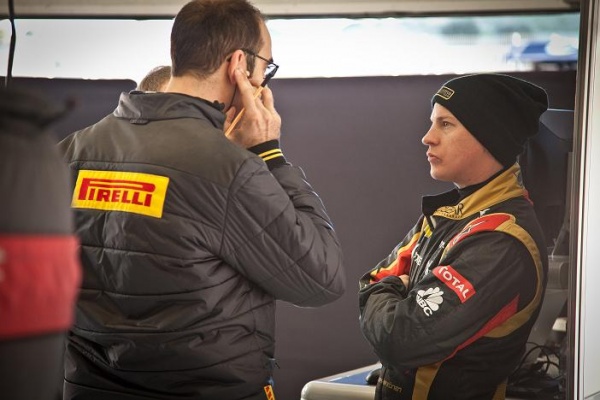 Kimi Räikkönen had his first taste of the E21 on track during the third day of testing in Jerez, Spain, ending the day with the 4th fastest time after a programme of aerodynamic assessment.

A crisp morning gave way to glorious blue skies as the team ran through a variety of exhaust evaluations. Running for Kimi ended early due to a clutch issue.

Kimi Räikkönen will take the wheel of the E21 for final day of the Jerez test tomorrow.

Kimi Räikkönen:
“It was good to get behind the wheel of a Formula 1 car again. The E21 feels quite good so far, even if the balance isn’t quite to my liking yet. That didn’t stop us going through the programme we wanted to do which had a lot of aero runs in it. We know the car can go faster, we were just running through what we needed to achieve. It’s a shame that we had a clutch issue at the end of the day, but that’s why we come testing so we can find these problems and fix them.”

Alan Permane, Trackside Operations Director:
“Although we haven’t covered as many laps as we have on the previous two days we have still have been very productive. We spent much of the morning testing various exhaust exit specifications for our Coandă system. The car isn’t yet fully to Kimi’s liking, but we improved this through the day. We still have work to do with the balance, which is something we’ll work on tomorrow. Running ended early for us with a clutch failure which we’re investigating, but overall we’ve had a productive day of aero and exhaust testing.” 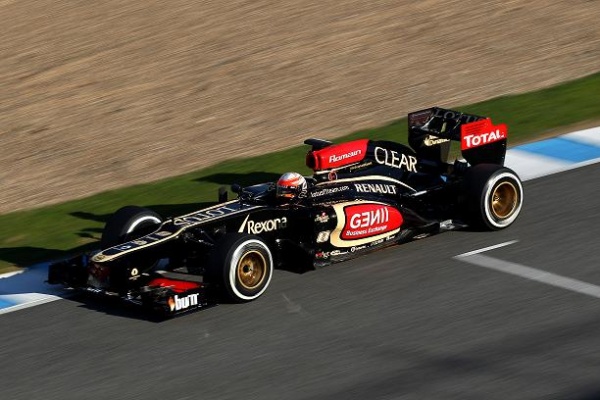 LOTUS F1 ON TOP ON DAY TWO IN JEREZ

Romain Grosjean ended the second day of testing at Jerez as comfortably the fastest man on track as the team continued its evaluation programme with the E21.

Under blue skies with occasional cloud coverage, Romain completed 95 laps; many of which dipped into the 1min 18s. He ended the day with the best time set thus far this week – a 1min 18.218secs – with no other car running under 1min 19.000secs.

Kimi Räikkönen will take to the wheel of the E21 for the first time tomorrow, before wrapping up the opening test on Friday.

Romain Grosjean:
“It was good today; the programme went to plan and we showed we have good reliability. For me, the whole test has gone well which bodes well for the year ahead. My feeling in the car is good and it was great to be at the top of the times. Even if it doesn’t mean anything during testing, it’s still good to be at the front. We used the soft, medium and hard compounds and whilst we’re not 100% yet on the differences between each we have a good idea. Kimi will be working on this area for the next two days so we’ll have a better understanding when we head to Barcelona. It’s not easy to understand everything about the car and tyres yet, but I think we’re working quite well and it’s up to us to find the best solutions.”

Alan Permane, Trackside Operations Director:
“I’m very happy with today’s performance. The pace looks good and we haven’t had any issues with reliability meaning we could complete all of our programme without interruption. We focused on learning more about the 2013 Pirelli tyres and ran with the soft, medium and hard compounds with a variety of different set-ups, both mechanical and aerodynamic, to understand how they react. This combined with a good mileage today to give us some very good data to work through ahead of Kimi getting in the car tomorrow.”