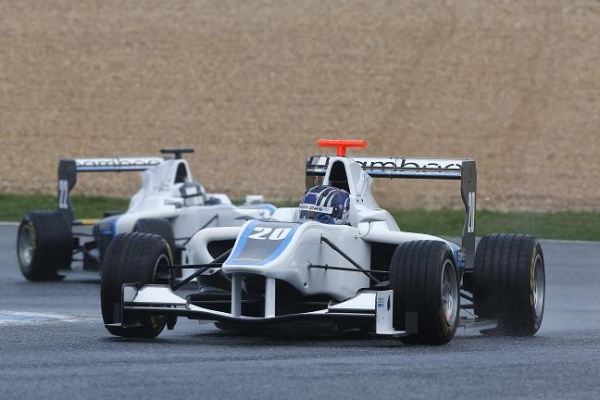 WILLIAMSON FASTEST ON THIRD DAY OF TEST IN ESTORIL –

Two new teams finished quickest in both the morning and afternoon session with Kevin Korjus and his Finnish outfit for Koiranen GP fastest posting the fastest time in the first half of the day with Williamson finishing the final day on top.

Today concluded a positive and successful test with the new second generation car as the full grid of 27 drivers covered 3809 laps in total over the three days. There were two amendments to the driver line-up for the final day with Kiwi Nick Cassidy replacing Tio Ellinas at Marussia Manor Racing and Lewis Williamson back in the Bamboo Engineering car in place of Ryan Cullen.

The final day of the first pre-season test at the Circuito Estoril got underway in torrential rain. There was an early red flag due to a stray dog on track. When the action resumed, Koiranen GP’s Kevin Korjus and the MW Arden duo of Carlos Sainz Jr and Daniil Kvyat were the early pacesetters as they dealt with the large volume of spray due to climatic conditions.

There were brief interruptions with the red flag after Jack Harvey (ART Grand Prix) stopped on circuit and Patrick Kujala (Koiranen GP) spun into the gravel bed. At the midway point Estonian driver Korjus held P1 from Sainz by 0.069s. The rain continued to hammer day and it was Patric Niederhauser who was next to become victim of the slippery track, spinning into the gravel which brought the red flag out.

Sunshine returned for the start of the afternoon test and Cassidy and Nick Yelloly led the pack after one hour. The conditions were not easy though with gusty winds for the drivers to contend with. Laptimes tumbled throughout the session once slicks were used and the midway point saw Korjus and Sainz Jr sat on top of the timesheets with laps in the 1.29s. Jimmy Eriksson spun as the rain began to fall again as the red flag was waved.

Race simulations were the focus for most teams with drivers also concentrating on their tyre management skills. Harvey shot to P1 with one hour remaining as Fontana stopped on the circuit with technical gremlins.  Williamson clocked the fastest time as the session drew to a close with the red flag after Fumanelli stopped. At the chequered flag it was Williamson, Kvyat, Visoiu, Harvey, Zamparelli, Fumanelli, Fontana, Niederhauser, Facu Regalia (ART Grand Prix), and Korjus.

Didier Perrin GP3 Series Technical Director commented, “This has been a fruitful and successful first outing for the teams and their GP3/13 cars. We have had very positive feedback from the drivers saying how fun and tricky this new machine is to drive. The teams are also very impressed by the reliability of the car as there were no major issues. All in all, everything is looking very promising. Now the focus from the teams can be on the performance of the car.”

The Circuit de Catalunya will host the next GP3 pre-season test which will run for two days on March 12-13th 2013. 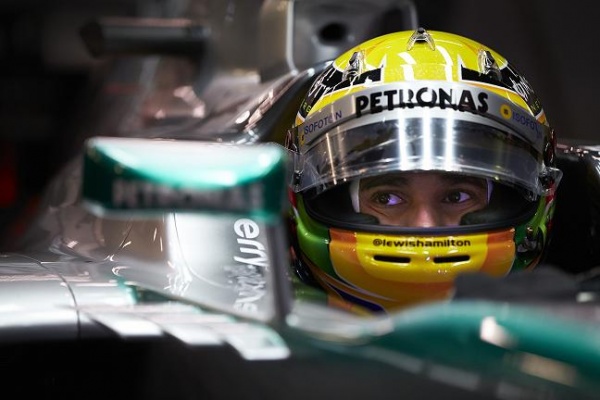 – In the wet conditions in the afternoon, the team focused on systems checks and tyre evaluations

Testing will resume at the Circuit de Catalunya on Thursday 28 February for the final pre-season test of 2013.

Lewis Hamilton
The conditions today meant that we didn’t complete as many laps we would have done in the dry but we have gone through the test items that we wanted to achieve this week. We have been working on our consistency over long runs and we managed one run this morning on dry tyres; the car felt okay but the conditions were also very cool, so we cannot draw too many conclusions. Like I said in Jerez, I can feel that we have a good foundation with this car but there is still a lot to learn and we know that the name of the game is to improve our downforce. From a personal point of view, my relationship with the team is growing all the time and it’s going really well. I’m happy working with the guys, we are working in the right direction together and I’m pushing to extract the most from the team, just like they are with me.

Ross Brawn
Overall, we’ve had a good week in Barcelona and achieved the programme that we set ourselves for this second test. The rain today was a little unfortunate; however we made the best of the conditions and were still able to take some useful data out of the day. Nico and Lewis are becoming more familiar with the car and its behaviour as each day progresses, and Lewis is settling into the team very well. Both drivers are providing excellent feedback which is pushing the development of the car both here and at the factory, and it is very rewarding to see their enthusiasm and commitment. We now have just four days of testing left until the first race in Australia, and a lot of work will be done before we return to Barcelona next week.