Sato, who started fourth in the 80-lap race on the 1.968-mile, 11-turn street circuit, provided A.J. Foyt Racing its first victory since July 7, 2002, at Kansas Speedway with Airton Dare behind the wheel. The last win for the team on a road/street course was by A.J. Foyt on Oct. 1, 1978, at Silverstone. Overall, A.J. Foyt Racing has 44th victories.

“Takuma made it look too easy,” team director and race strategist Larry Foyt said. “It made me so nervous watching it out there. He just drove a flawless race.”

Sato, making his 52nd IZOD IndyCar Series start, overtook Ryan Hunter-Reay for second on Lap 23 and assumed the point on Lap 30 when race leader Will Power pitted under yellow. The remainder of the race Sato’s No. 14 ABC Supply car was strong on both the Firestone primary and alternate tires.

“It was just a perfect weekend to be honest,” said Sato, whose previous best finish was second at Edmonton in 2012. “The team did a tremendous job. It is great news for the Japanese. Japan has had such a tough time after the earthquake. I’m really happy to give everybody some good news.”

Sato led Graham Rahal across the finish line under caution. It was the best finish for Rahal since finishing second at Texas last June. Justin Wilson, who won that race at Texas Motor Speedway, advanced from the 24th starting position to finish third.

Sato is the third winner in as many IZOD IndyCar Series races this season and climbed to second in the championship standings. Helio Castroneves, who finished 10th, has a six-point lead heading into the May 5 race on the street circuit in Sao Paulo, Brazil. Honda-powered teams swept the podium for the first time this season.

Also at Long Beach, Carlos Munoz won the Firestone Indy Lights Long Beach 100 from the pole position. It was the second consecutive flag-to-flag victory for Munoz, driving the No. 26 Dialy-Ser car for Andretti Autosport. 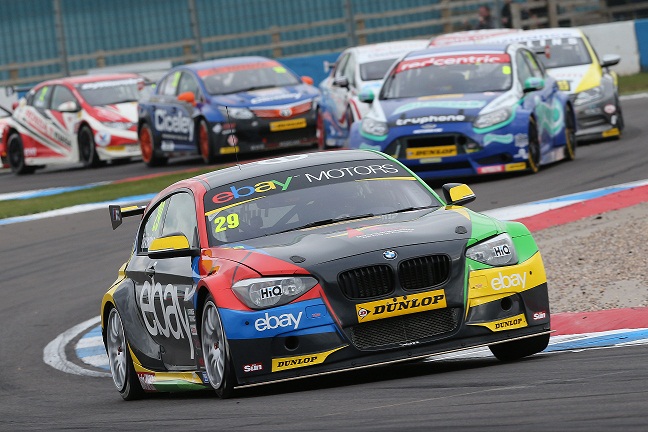 Former champion Colin Turkington made a popular return to the top step of the BTCC podium in the final race at Donington Park after the Hondas of Gordon Shedden and Andrew Jordan shared the spoils in the opening two contests.

It was also an historic day for multiple champions Matt Neal and Jason Plato who both contested their 500th and 400th BTCC races respectively.

The racing headlines belonged to Turkington, however, after he blasted by pole-sitter Tom Onslow-Cole’s VW Passat off the line and immediately pulled clear in the reversed-grid race three. He eventually romped to the win, which also marked the maiden victory for the new eBay Motors BMW 125i M Sport and Turkington’s first since his 2009 title winning campaign. Shedden and Neal completed the podium after the duo muscled past the MG of Sam Tordoff on the final lap.

Having scored his first pole position for nearly two years in Saturday afternoon’s qualifying session, Honda Yuasa Racing’s Shedden stormed to a lights-to-flag win in the opening race. Pirtek Racing’s Andrew Jordan kept him honest throughout and eventually finished the race less than half a second behind the reigning champion. Worcestershire driver Neal finished third to secure a 1-2-3 for Honda.

Neal and Plato completed their milestone encounters in race two with the cars carrying the one-off race numbers of 500 and 400 to celebrate their respective achievements. It was Staffordshire racer Jordan, however, who continued his stellar start to the season by taking the win at his home circuit. Plato finished second ahead of Shedden and Neal.

The other standout driver in the field at Donington Park was Ciceley Racing’s Adam Morgan, who hauled his Toyota Avensis to three top five finishes.

Plato maintains his lead in the driver standings with the gap back to Jordan standing at five points. A total of 20 points cover the top five order, which are rounded out by Neal, Tordoff and Shedden. MG KX Momentum lead the teams’ championship, ahead of Honda Yuasa Racing and Pirtek Racing. eBay Motors has improved to fourth in the standings thanks to Turkington’s outstanding victory.

Colin Turkington said: “Obviously I’m delighted with the result of the final race. I knew that the start was going to be critical and that if I got into the lead, I could try and break away from the cars behind. That’s exactly what I managed to do, and it was fantastic to get the win. This is a great reward for the guys who have worked so hard over the past six months to get the three cars built and ready for this season and I feel we’ve made a step forward this weekend. Hopefully this victory can be a springboard for us.”
Gordon Shedden said: “We managed the gap in the first race, kept it sensible and brought the car home for a good win. It was a good victory and overall it was nice to secure a solid points haul after a bit of a mixed time at Brands Hatch in the last round.”

Andrew Jordan said: “The home crowd gave me a lot of support here this weekend. Matt and Jason obviously won at Brands and then Gordon won the first one here, so I thought it was time I got myself on the top step of the podium. The car has just been fantastic all weekend. Everyone talks about Plato, Neal and Shedden, but we’re not surprised by our pace and we consider ourselves as championship contenders.”

Matt Neal said: “It has been a special day for me. Of course you always want race wins but I’ve been around long enough to know that you can’t have it all your own way all the time. We scored some good points and to compete in my 500th race at my home circuit was fantastic.”