WEEHAWKEN, N.J. (May 9, 2013) Christopher R. Pook joins the Formula One Grand Prix of America at Port Imperial executive team as Special Assistant to the Chairman, Leo Hindery, Jr. Pook is a recognized leader in U.S. motorsports, with decades of experience developing venues and events. He joins an established executive team including YES Network founder Hindery, sports and entertainment veteran Dennis Robinson, and sports marketing and corporate development specialist Dick Goldschmidt. Pook will provide consultation with respect to all aspects of construction, planning and execution of the Grand Prix of America at Port Imperial race.

“I am happy to be working with Chris again after some 20 years. Chris has a history of great success in Formula One, which I’m confident he’ll bring to the Grand Prix of America race,” Formula One CEO Bernie Ecclestone said. “We look forward to working with him to bring F1 racing to New Jersey and New York.”

“The F1 Grand Prix of America at Port Imperial just gained another invaluable team member who will ensure the race will be like nothing the region has ever witnessed,” race promoter Hindery said. “Chris is a leader with decades of experience in American motorsports. We are delighted to add someone with his accomplishments and level of expertise to the Grand Prix of America at Port Imperial team.”

Pook founded and managed the famous and successful USA Grand Prix West, which was the first Formula One street circuit race in the United States and later evolved into an annual event in the Formula One World Championship. He also helped develop other races around the country including races in Detroit, Las Vegas, Dallas, St. Louis, Denver and St. Petersburg, Fla. Pook is the former CEO of the Championship Auto Racing Teams (CART) series in the U.S. and a former member of the board of Dover Motorsports, Inc.

The inaugural Formula One Grand Prix of America at Port Imperial is planned for June 2014. The race will receive no subsidies from either local or state government and is expected to generate more than $100 million in economic benefits for New Jersey and New York each year.

The race will be run on a 3.2-mile course using existing streets in Weehawken and West New York, N.J., along the Hudson River and at the top of the Palisades, with the New York City skyline as the backdrop. More than 100,000 people are expected to attend over the course of three days, starting with practice on Friday, qualifying on Saturday and the Formula One race on Sunday. Fans will arrive through a combination of NJ Transit, PATH and New York Waterway ferries. 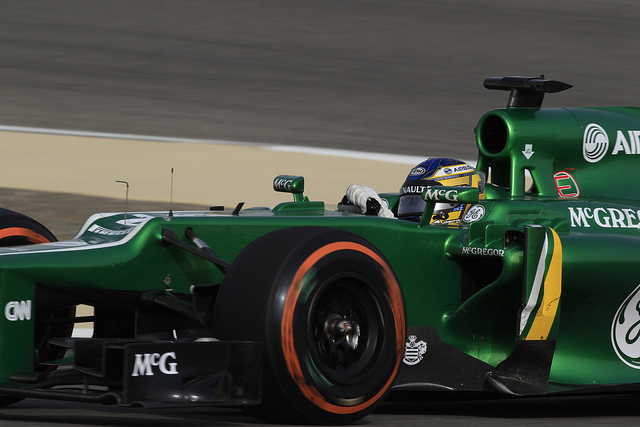 Caterham F1 Team has launched “Access All Areas”, the team’s 2013 film which can be viewed now at www.YouTube.com/CaterhamF1

“Access All Areas” was shot at the Magny Cours circuit in France and gives an insight into a day in the life of an F1 team at work on track. Viewers will have a rare glimpse into the lives of race drivers Charles Pic and Giedo van der Garde, and views of the CT03 race car in 2013 race five (Spanish Grand Prix) specification for the first time this season.
Cyril Abiteboul, Team Principal, Caterham F1 Team: “The whole team is proud to unveil our 2013 team film, a piece of work that gives a real insight into what we think makes a day in F1 so special. The drivers have opened their doors to the cameras and, for the first time this year, we’ve been able to show what our definitive 2013 car looks like.
“We started this season with a hybrid car and raced that for the first four Grands Prix this year. We brought some of the new package that is featured in “Access All Areas” to the last race in Bahrain and that brought a small performance step, and now we can show the 2013 race car for the first time, before it races at the Spanish Grand Prix.
“In addition to the rear wing that Charles raced in Bahrain, the most obvious visual change to the car is the addition of the vanity panel on its nose. We said when we launched our revised 2013 livery that we think we have one of the best looking cars, and the package we’re running from Spain is another step in that direction.
“But beyond the aesthetic, our sights will be on the laptimes. We saw from the pace Charles had in qualifying and the race in Bahrain that the updates we brought to that race worked as we’d predicted, and now we have our 2013 baseline package completed we’ll aim to keep progressing from Spain and throughout the rest of the season.  Now that our production facility is finally up and running in Leafield, we are in position to have new parts coming at every race this year, a program we’re managing efficiently alongside the 2014 new car project. We’re all quietly confident we can start playing a role in the F1 show this year, and for many seasons to come.”
F1Weekly Podcast # 826