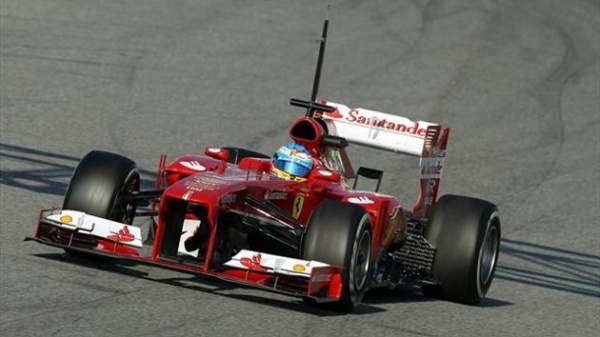 Fernando Alonso won the Spanish Grand Prix in front of his jubilant home fans on Sunday to close the gap on championship leader Sebastian Vettel and get right back in the Formula One title race.

Staring from fifth place, Alonso won his second race this season, showing that Ferrari can challenge Red Bull for pure speed. Alonso was easily quicker than Vettel, with the three-time defending champion finishing fourth ahead of team-mate Mark Webber. 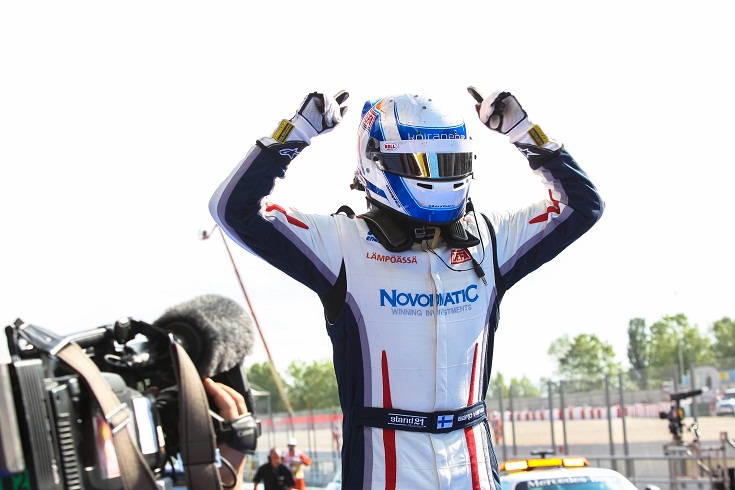 Vainio wins 50th GP3 race…
Koiranen GP finish one-two in Barcelona Race 2
What a debut: Koiranen GP, newcomers to GP3 Series this season, certainly made an impression with a superb one-two with Aaro Vainio and rookie Kevin Korjus in their maiden race weekend. Jenzer Motorsport’s Patric Niederhauser joined the pair on the podium.
Vainio made a superb start from fourth on the grid to be leading at the first corner in front of his teammate Korjus who had started from reverse pole. Tio Ellinas, Race 1 winner, also made an impressive getaway from P8 up to fifth but best start of the day went to his fellow Marussia Manor Racing driver Dino Zamparelli, who started from last on the grid and was P13 by the end of lap one.
The safety car was briefly deployed after lap one following an incident which saw Melville McKee out of the race for Bamboo Engineering. Robert Visoiu (MW Arden) and Emanuele Zonzini (Trident) also had an excursion through the gravel.
MW Arden’s Daniil Kvyat had a premature end to his race after contact was made with Ryan Cullen, when the Brit attempted a pass on the inside. Vainio and Korjus set an impressive pace to build up a large advantage of five seconds at the front of the field with a five way fight for P3 with Nick Yelloly leading the chasing pack.
Trident’s David Fumanelli was keen to pass the Brit’ for the rostrum position and the Italian tagged the back of the Carlin machine which sent Yelloly into a spin at turn 14, which dropped him down the race order. Ellinas seized the opportunity and shot past the dicing duo to snatch P3 whilst Fumanelli continued thus with damage to the nose of his car.
Sainz Jr (MW Arden) had started from outside of the top ten began plucking his way through the order and was hot on the heels of ART Grand Prix’s Jack Harvey, finding a way through for P7. The Koiranen GP duo began to manage a more controlled pace at the front, with a ten second lead back to P3. Ellinas clearly began suffering with tyre degradation so Niederhauser harassed the Cypriot, the pair having a fantastic battle with very clean and respectful moves, with the Swiss snatching the third place away from his rival.
At the chequered flag, Vainio crossed the line with a one second advantage over his Estonian teammate to secure his second victory in GP3 and conclude a very positive start for the newcomers. Korjus also pocketed a further two points for posting the fastest lap. Niederhauser finished P3, with all eyes on the tussle for P4. Ellinas edged ahead of Fumanelli, Conor Daly (ART Grand Prix), Sainz Jr and Harvey for the final points scoring places.
Ellinas heads the Driver’s Standings on 39 points, with Niederhauser on 28 and Vainio on 15.
Round 2 of the Series heads to Valencia on 15-16 June with a test session prior to this at Budapest 05-06 June.
Barcelona – Race 2 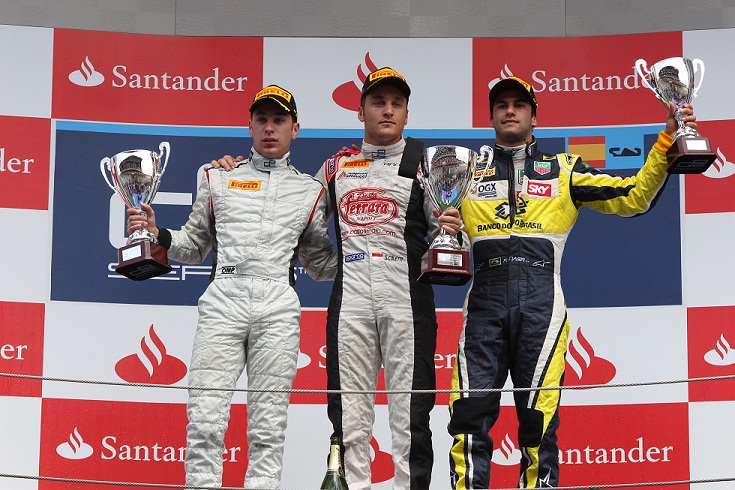 Coletti dominates sprint race in Barcelona…
Monegasque driver extends points lead
Stefano Coletti has claimed his second win of the season with a mature drive after a storming start for a dominant victory in today’s sprint race in Barcelona, controlling the pace all the way to lead home Robin Frijns and Felipe Nasr.
The win was set up at the start: poleman Johnny Cecotto made a decent getaway but Coletti’s was even better, getting alongside the front man ahead of turn one before going all the way round the outside for the lead. Behind them Tom Dillmann stalled, but Frijns snuck inside while his rivals tripped over each other, giving the Dutchman a clear run to the first corner.
Cecotto tried in vain to fight back but Coletti had the measure of the Venezuelan, who lost grip for just long enough to allow Frijns and Nasr to blow by, while Jolyon Palmer, Alexander Rossi, a slow starting Kevin Ceccon and Rio Haryanto slid in behind.
With everyone needing to concentrate on maintaining their tyres to the end of the race most of the field were content to keep their powder dry and wait for their rivals to make a mistake: eventually the damage to Cecotto’s car showed as a train formed behind him, and it was only a matter of time before he dropped back.
Palmer’s pressure finally paid off and he was through on lap 20, although the Venezuelan damaged his front wing against the Briton’s right rear tyre, slowing him further: Ceccon tried the same move but ran wide, Rossi locked up going inside Cecotto at turn one and allowed Haryanto through, with Sergio Canamasas and Daniel Abt thrown into the mix with just two laps remaining.
The Spaniard looked to have a clear run on Cecotto but had the door slam shut: with a slowing Canamasas on one side of the track and a squeezed Abt on the other, Haryanto had nowhere to go but over the Spaniard’s rear wing, the second time in the weekend Canamasas had to retire without it, while seemingly half of the field were tripping over each other to find a way to the line.
Out in front Coletti had eased his pace from a gap of over 4 seconds to lead home yesterday’s victor Frijns by 0.6 seconds at the line, with Nasr on the podium again 7 seconds behind them. Palmer had a quiet run to fourth place, with Cecotto the next man to see the chequered flag just ahead of Rossi, Ceccon, Abt and Fabio Leimer.
The win saw Coletti stretch his points haul to 93, ahead of Nasr on 76 points, Leimer on 54, Frijns moving up to 37 points with Sam Bird on 33 and Palmer on 31, while in the teams’ championship Carlin lead Rapax by 107 points to 101, ahead of Racing Engineering on 64, Hilmer Motorsport moving up to fourth with 56 points, one point ahead of RUSSIAN
Barcelona – Sprint race
Fastest Lap : Tom Dillmann (RUSSIAN) – 1:33.337 on lap 14
F1Weekly Podcast # 826