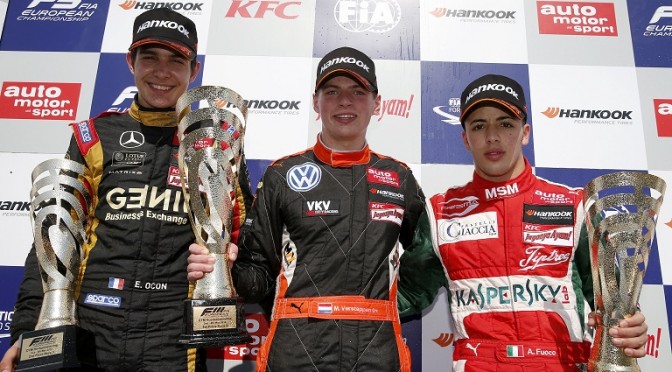 In the sixth season round of the 2014 FIA Formula 3 European Championship, Max Verstappen (Van Amersfoort Racing) claimed victory and thus also scored the maiden win for his team Van Amersfoort Racing in the world’s strongest junior race series. At the 4.574 kilometres long Hockenheimring Baden-Württemberg, the Dutchman, only 16 years old, led from lights to flag and thus won from Lotus F1 junior driver Esteban Ocon (Prema Powerteam) and Antonio Fuoco (Prema Powerteam), who is backed by the Ferrari Driver Academy. In the drivers’ standings, 17-year-old rookie Esteban Ocon extended his points’ lead with his fifth podium finish from six races.

Max Verstappen used the benefit of pole position and took the lead straight away. On the first few metres already, the Dutchman was able to pull clear a little bit from the rest of the field, led by Esteban Ocon and Felix Rosenqvist (kfzteile24 Mücke Motorsport). Meanwhile, John Bryant-Meisner (Fortec Motorsport), Tom Blomqvist (Jagonya Ayam with Carlin) and Félix Serrallés (Team West-Tec F3) collided in the midfield, which brought the safety car out for a brief while. After the restart, Verstappen remained in the lead from Ocon and Fuoco, who inherited third place as Swede Felix Rosenqvist (kfzteile24 Mücke Motorsport) retired.

Max Verstappen (Van Amersfoort Racing): “It is great and I am extremely happy. After I didn’t make it to the finish in the first race and couldn’t start in the second race due to a technical problem, I wanted to score points no matter what. My start was good and after that, I kept a consistent margin of around one second. Then, I tried to save my tyres a little bit and not to overdrive my car. Many thanks to my team that managed to repair my car in time after the problems in the second race.”

Esteban Ocon (Prema Powerteam): “I think that the start was the key to success today and Max’s start was simply better than mine. In the early stages of the race, I was quicker than Max, but I just didn’t find a way past. Nevertheless, I am very happy with second place.”

Antonio Fuoco (Prema Powerteam): “I am happy with this race, but not with the entire weekend. My start was good and I was able to overtake Felix Rosenqvist and Antonio Giovinazzi quite early. At times, I was quicker than the two drivers in front of me, but third place was all I could manage today.”

MULLER AND LÓPEZ PULL THEIR WEIGHT!

– The Citroën C-Elysée WTCCs pulled off another one-two today, with José-María López finishing second to Yvan Muller in the first race at the Hungaroring.
– On a circuit where overtaking opportunities are hard to come by, the Citroën drivers were not able to work their way into the podium places in race 2.
– José-María López and Citroën Total continue to lead the World Championship standings. The Argentine driver keeps his lead in the Drivers’ standings, while Yvan Muller has now moved ahead of Sébastien Loeb.

After dry conditions for qualifying, there was some uncertainty as to the weather conditions that could be expected for the two races scheduled for early this afternoon. There was torrential rain overnight, but it stopped a few hours before the start.

When the red lights went out, Yvan Muller and José-María López capitalised on their grid positions to move out in front. Sébastien Loeb, however, made a mess of his start and found himself boxed in at the first corner. The driver of Citroën C-Elysée WTCC n°9 finished the first lap in seventh place, behind Muller, López, Monteiro, Tarquini, Bennani and Michelisz.

Yvan Muller managed to open up a lead, but Pechito López kept up the pressure on his teammate. Meanwhile, Sébastien Loeb was trying to find a way past Norbert Michelisz. Despite their efforts, the Hungaroring lived up to its reputation, and there was no more overtaking to be seen. So Yvan Muller claimed his second race win of the season, with José-María López and Tiago Monteiro joining him on the podium.
After a short break, the cars returned to the track for a rematch. Due to the reverse grid system, Loeb, López and Muller started from 8th, 9th and 10th.

Gianni Morbidelli led at the first corner, from Tiago Monteiro, Hugo Valente (who had started from pole) and Tom Coronel. Showing inspired form from the off, Yvan Muller managed to slip in between his teammates and grab fifth position from José-María López. Once again, Sébastien Loeb failed to take the best option, ending lap 1 in ninth place.

Very quickly, Morbidelli, Monteiro and Valente pulled away from the chasing pack, while Muller and López could not find a way past Coronel. That was how things finished, meaning the Citroën drivers missed out on a podium place.

This weekend’s results see José-María López hold his lead in the World Championship, while Yvan Muller has moved past Sébastien Loeb into second spot. In the Team standings, Citroën Total has extended its lead to 99 points

Yves Matton: “Considering the nature of the circuit and the compensation ballast introduced before the meeting, this has been a very positive weekend for us. We can be proud of winning the top three spots in qualifying and finishing first and second in race 1. We knew that it would be almost impossible to get back on the podium at the end of race 2. The starts were the only opportunities we had to move up the field. After that, there was no overtaking in either race. The other thing this meeting has taught us is that the teams are now demonstrating very similar levels of performance. That’s a good sign for the rest of the season.”

Yvan Muller: “We knew that the start would be crucial on this circuit. In race 1, I attacked and managed to open up a bit of a lead on José. When he came back at me, I was able to show him that I could respond in kind. I was able to look after my tyres in the last few laps and notch up another win. I’ve always won the first race here and it’s nice to continue that run! I’m also satisfied with fifth place in race 2. It’s not just the podium finishes that help you win a championship.”

José-María López: “Yvan was just better in every department this weekend. But after three meetings I’m still leading the championship and that’s better than I had hoped for before the season began! Even though it’s almost impossible to overtake here, I think the public saw some interesting races, and that’s good for the championship as a whole.”

Sébastien Loeb: “I had two difficult starts: each time I chose the worst option! In race 1, when I saw that my competitors were all keeping tight to the inside, I tried to get round on the outside, but I ended up getting boxed in. So as not to suffer the same fate twice, I positioned myself on the inside in race 2, but I still got overtaken on the other side. I don’t know if you can put it down to a lack of experience or success, but my starts meant I was out of the running from the off. I hope to put things right next week in Slovakia!”