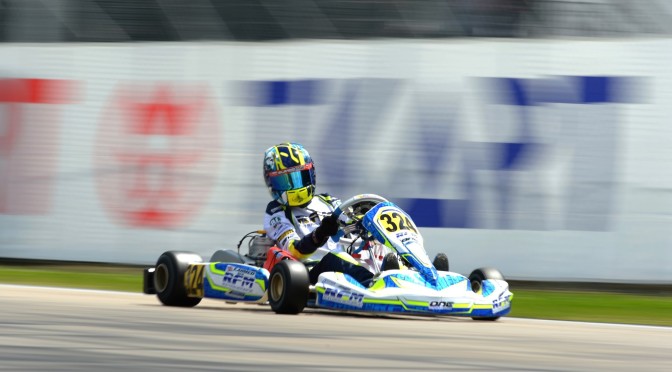 THE YOUNG MASTER OF MASTERS

Prior to the 1st Round at Sarno, Napoli, Enaam was the front runner on the Points Table.  Considering the harsh wet weather conditions, unfortunate collisions,  and engine issues experienced at Sarno, Enaam displayed   tenacity and true grit to eventually finish 3rd on the Podium.  However, this pushed Enaam down to 8th position on the overall Points Table.  Was the Young Master finally succumbing to the huge pressures and expectations placed upon his budding shoulders?  Was this the beginning of the end of his dream?  Next port of call was the WSK Super Masters Championship at La Conca, Italy.  There was little or no room for error if he was to remain a contender for the European, and World Titles.

The Super Master Champion at La Conca is one of the most renowned titles on the WSK Championship Circuit.  Past Champions include Jules Bianchi, Nyck De Vries, Max Verstappen, and Marco Ardigo.  La Conca is one of Enaam’s favourite tracks and this was demonstrated when he posted the fastest lap times during testing.  A chaotic qualifying meant Enaam missed the pole position largely down to Mick Junior, son of Micheal Schumacher, who brought dirt onto the track and stopped Enaam achieving the fastest time.   However all was not lost. Enaam’s overall qualifying position meant he would start 3rd for all four heats.  A very strong starting position around this circuit.  Enaam powered through the heats winning 3 out of 4.   This put him in pole position for the Pre-Final.

Sunday brought the added pressure of the finals. Enaam remained aloof from his competitors with nonchalant like composure.  The aim was to win the race, and then worry about the championship position after. If He won both finals he would win the championship.

The Pre-Final began perfectly as Enaam opened up a significant gap, and after receiving signals from his team to up his speed, he pushed to the max crossing the line first.  This maximised Enaam’s points and most importantly he completed the race in a faster time than his team mate and rival Max Fewtrell. The prestigious pole was achieved.

Enaam began the Final smoothly skilfully avoiding the first corner renowned for foiling many drivers with messy starts and collisions.  He faced pressure from James Pull, the Singapore and Tony Kart driver who was fast making chase.  A defected tyre caused Enaam problems and meant James Pull was closing the gap.  In spite of this Enaam quickly worked a way out to handle the tyre imbalance and pushed 100% speeding away from James Pull.  Meanwhile, the championship contenders Max Fewtrell and Daniel Ticktum were tripping over themselves. This benefitted Enaam and made his lead even stronger. The final lap came and Enaam knew he had done enough. If he could maintain the gap he could win the finale of the WSK Super Masters Series. Enaam crossed the line with his hand in the air but not knowing if he had won the championship or not?

Daniel Ticktum had finished below 5th place!  Enaam had won the title!  He was ecstatic! Applause from everyone in the paddock showed that Enaam’s victory was a popular one. And despite barriers getting put in his way he battled through to get the overall victory. Triumph again for the 14 year old Young Master. The next challenge is the European Championship in two weeks where Enaam will start favourite.

“All men dream, but not equally. Those who dream by night in the dusty recesses of their minds, wake in the day to find that it was vanity; but the dreamers of the day are dangerous men, for they may act on their dreams with open eyes, to make them possible”    T.E Lawrence