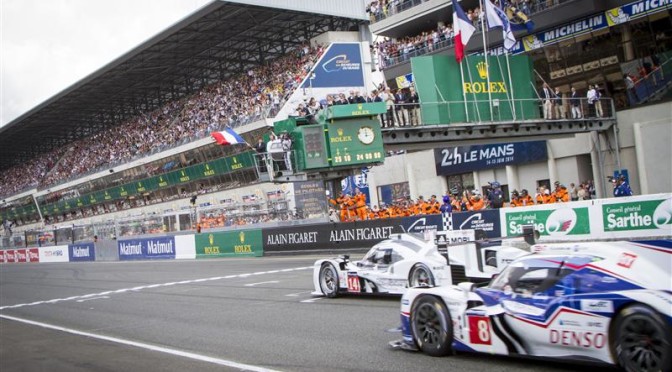 Four major automotive manufacturers are challenging for the elite category LM P1, and in all likelihood the overall win of the race; an achievement that secures the winning drivers a place in sporting history along with a specially engraved Rolex Oyster Cosmograph Daytona, the iconic chronograph created for racing drivers in 1963. The 24 Hours of Le Mans, founded in 1923, is organized by the Automobile Club de l’Ouest (ACO), and Rolex has been Official Timepiece since 2001 – a partnership which is driven by a shared passion for excellence and the pursuit of perfection.

Porsche, the most successful manufacturer in the history of the race with 16 wins spread over 28 years, made an almost perfect return to the prototype class last year after a 14-year absence. Its challenge to the hegemony of Audi, the second most successful constructor with 13 wins spanning a compact 14-year period, faltered only in the latter stages of the race. Porsche will be aiming for greater things this time. Its hybrid car is undeniably quick. One of its driver line-ups – Brendon Hartley, Mark Webber and Timo Bernhard – has secured pole position at this season’s two previous FIA World Endurance Championship (WEC) races. It was quickest too on a rain affected test day. Yet the key to winning any endurance race lies beyond pure speed.

On the surface, the 24 Hours of Le Mans may be all about cutting edge engineering, breakthrough technology and futuristic design. The ACO, though, has huge respect for the traditions of the race, its long history and the car marques and characters that have helped shape its reputation and status.

William Clay Ford Jr., the Executive Chairman of the Ford Motor Company, has been named the honorary starter for the race. The great-grandson of Henry Ford will wave the French ‘Tricolore’ to get the race underway just as his uncle, Henry Ford II, did in 1966 the year the American manufacturer’s GT40 broke the dominance of Ferrari, setting in train a four-year winning streak.

Tom Kristensen, the most successful driver in the 90 plus years of the race with 9 wins from 18 starts, including six consecutive wins from 2000-05, is also being recognized by the organisers following his retirement at the end of the 2014 season. For his extraordinary contribution over the years, Kristensen, a Rolex Testimonee, has been named the Grand Marshal and will drive the pace car during the formation lap.