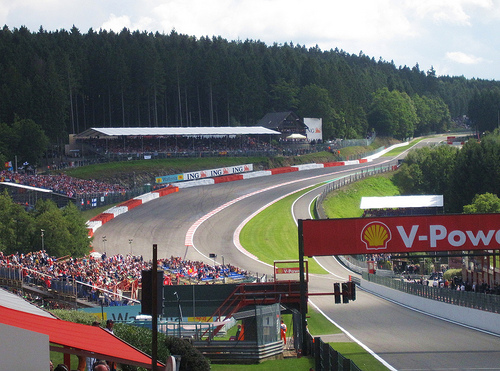 The fifth round of the 2015 FIA Formula 3 European Championship season will be held this weekend at the tradition-rich circuit of Spa-Francorchamps, Belgium. With Eau Rouge, the 7.004 Ardennes rollercoaster features one of the most famous sections in the motor-racing world and the young drivers are keen on mastering this challenge. Just in his home event at Monza, Italy’s championship leader Antonio Giovinazzi (Jagonya Ayam with Carlin) failed to secure a podium – for the first time this year – so, he is determined to make it back to the rostrum, in Belgium. Tatiana Calderón (Carlin), the only woman in the field, has particularly fond memories of Spa-Francorchamps.

In the current season, Calderón who scored a total of 29 points last year still is waiting for her first points. So, it’s the same situation as last year when the 22 Colombian also travelled to Belgium with no points on her tally – to score her first points at the particularly challenging circuit of Spa-Francorchamps by finishing fifth in the second round of the meeting. On the following six race weekends, the fast Colombian established as regular top-10 contender and always left the race venues with additional points under her belt.

Meanwhile, Antonio Giovinazzi, Charles Leclerc (Van Amersfoort Racing) and Felix Rosenqvist (Prema Powerteam) are battling for the positions on the very top of the championship standings, with the gap between the three drivers amounting to a total of just 22 points. At the same time, Jake Dennis (Prema Powerteam) in fourth position works hard on closing the gap to the leading trio. The 19-year old Britain is the only one of these four drivers who already secured an FIA Formula 3 European Championship podium at Spa-Francorchamps. Even slightly more successful in last year’s FIA Formula 3 European Championship appearance at the Ardennes track than Dennis, who clinched a third place, was Gustavo Menezes (Jagonya Ayam with Carlin). The 20-year old American with Brazilian roots, currently 10th in the championship, secured two third positions last year, thus being the driver with the best Spa result under his belt on the 2015 grid.

Tatiana Calderón (Carlin): “I always look forward to Spa-Francorchamps as this circuit is just fantastic. Eau Rouge is particularly special although you can go flat out, there, with a Formula 3 car. The entire track is extremely varied – and I am talking not only about the traditionally very changeable Ardennes weather. There are slow, medium fast and several fast sections. You have to find a good set-up for your car and a suiting style of driving – a good compromise between aggressiveness and smoothness. And I think that’s what I succeeded in doing particularly well, last year. My goal for the forthcoming weekend: to score points as you are clearly more relaxed regarding the tasks to come when you have got the first points on your tally. This worked very well for me in 2014 and I hope I will be able to repeat it now.”