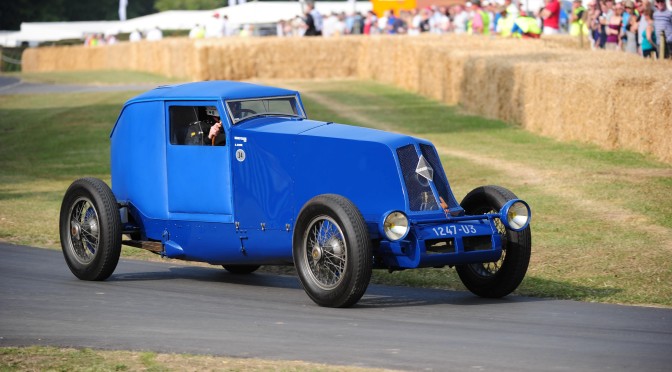 Renault – motorsport feeds the breed: over 115 years of innovation and success in motorsport at Goodwood Festival of Speed

Renault will showcase over 115 years of motorsport history at the 2015 Goodwood Festival of Speed, this glittering history of innovation and success demonstrated by cars ranging from the 1902 Renault Type K to the 2005 Formula 1 Renault R25.

The direct link between innovation on the track and innovation for the road will be evident in the exciting array of Renault’s latest models, from the brand new Clio Renaultsport 220 Trophy EDC – showing for the first time in the UK – to the keenly anticipated All-New Kadjar crossover and the charming electric Twizy.

Renault has committed to a further three-year agreement with Lord March to participate actively in the Festival of Speed at Goodwood.  Michael Van der Sande, Senior Vice President, Global Marketing, said: “Ever since our company was founded back in 1898, the people at Renault have been passionate about motorsport. This passion is passed on from one generation to the next, and it has given birth to some of the most iconic cars in Renault’s history: the Renault 8 Gordini, the Renault 5 Turbo, the Clio Williams, the Mégane Renaultsport, not to mention Renault’s Formula One and Formula E contributions.

“We are very proud to be partners of the Goodwood Festival of Speed for three more years. The Festival Of Speed is a very unique event in Europe: it is the perfect setting for us to share our passion for motorsport with equally passionate members of the public, and to showcase some of our most beautiful and exciting cars”.

Lord March said: “We are delighted that Renault chose to remain a sponsor of the Goodwood Festival of Speed for a further three years. With a racing history dating back over 115 years, an exceptional victory record and a unique take on motorsport, Renault is one of the key actors in our industry and its presence contributes to make the Festival Of Speed a genuinely world class event.

“Renault’s approach to the car in general, and to motorsport in particular, is often different, innovative and clever and forces its competitors to look at things from a new angle. It spurs innovation and competition, all things which we very much enjoy here at Goodwood.”

The direct link between Renault’s motorsport activities and its road cars is amply and excitingly illustrated by the brand’s Renaultsport models; these much admired and desired high performance cars attracting the admiration and affection of both customers and critics. Developed by a Renaultsport department that has a deep understanding of the ingredients needed for a great driver’s car, these models are not only the benchmarks for their class, but regularly topple cars costing several times the price in comparisons of drivers’ cars. The Mégane Renaultsport 275 Trophy is a fine example of this phenomenon, this car regularly shining in comparison tests, while the latest Clio Renaultsport 220 Trophy EDC promises the prospect of similar giant-killing feats.

That the wellspring of innovation flows through everything Renault does is evident in the All-New Kadjar crossover, big brother to the hugely successful Captur. It’s the latest in a long and honourable line of innovative family Renaults that includes ground-breaking legends such as the Renault 16 hatchback – celebrating its 50th anniversary this year, the Clio’s Renault 5 ancestor, the segment-defining Espace and the Scenic.

Visitors to Goodwood will be able witness – live – an early part of the creative process that produces cars such as these on the Renault stand. Renault’s design team, including head of exterior design Anthony Lo, will make regular presentations on the art and engineering of design, together with demonstrations of the clay-modelling that is such a vital part of the process.

Displays of the exciting new Clio Renaultsport 220 Trophy and the Renault Kadjar crossover are star features of the Renault stand, along with live clay-modelling demonstrations from the Renault design team, an example of the startlingly dramatic, 550hp mid-engined Renaultsport R.S.01 race car and a model of the zero-emission Formula E Spark-Renault SRT_01E racer.

The Kadjar is appearing here some months before it goes on sale in the last quarter of 2015. Also on show are examples of the Renault Mégane Renaultsport 275 Trophy, the successful Captur crossover, the innovative rear-engined Twingo city-car and the unique electric Twizy.