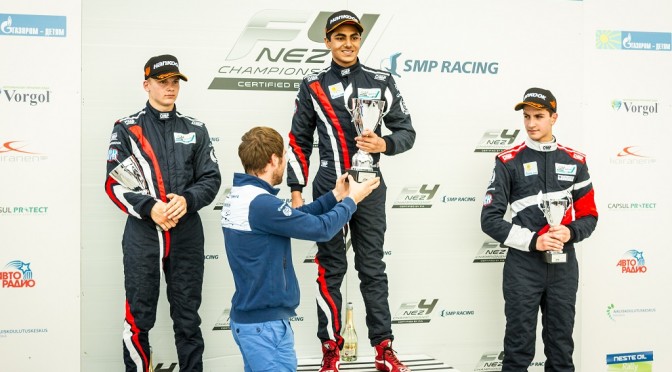 F1Weekly is very pleased to announce the arrival of our young friend, Enaam Ahmed, in the winner’s circle.
Enaam, who turned 15 last February, took his much deserved maiden win of his young single-seater career with a dominating performance in the opening race of the weekend last Saturday at Parnu, Estonia, competing in the SMPF4 Championship.
“Really happy and looking to carry on the string momentum I have from the last few MSA Formula races, and now this win capitalizes on that even more,” explained an elated Enaam.
The MSA Formula is the British version of the FIA initiative to provide the first step from karting under the Formula 4 banner. Similar championships are also under way in Germany and Italy.
Enaam’s victory came in the NEZ North Europe Zone, this series is backed by the Russian bank SMP, featuring races in Finland, Estonia and Russia.
Like the old classic from Captain and Tenille, ‘Do that to me one more time, once is never is enough,’ Enaam went on to win the second race of the weekend also.
The resumption of races after the summer break has seen Enaam fully motivated and focussed on achieving results ahead of pre-season expectations.
“Mid season I am happy I got podiums and wins. It came earlier than expected but I’ll take it, haha!” said the young lad from London town.
On the depth of competition between racers in the British and NEZ championships, Enaam stated, “I’d say in the NEZ Championship the top eight are as good as in UK, but there is more of a variety of good drivers in the UK.”
His favorite tracks in his rookie season are Snetterton in England, and Knockhill in Scotland. And with good reason; “I have enjoyed Snetterton and Knockhill the most as I got my best finishes in UK there!”
Here is link to Enaam’s first victory, please enjoy the racing action from Estonia.
SMP F4 Championship – Pärnu – Race 1 New
F1Weekly podcast # 820