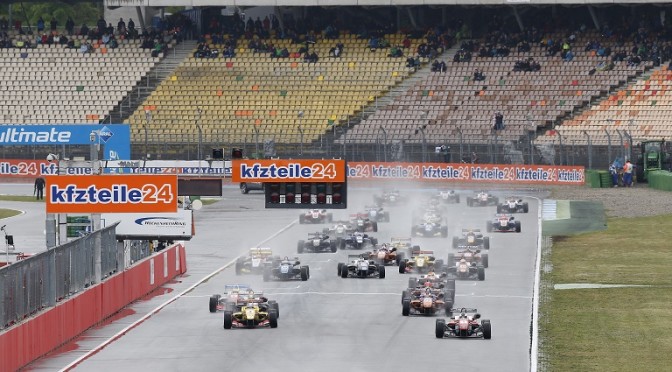 The three FIA Formula 3 Championship titles – in the driver, rookie and team rankings – already have been secured. However, the battle for the second place in each of the three rankings has been carried over to the season finale at the 4.574-kilometre Hockenheimring Baden-Württemberg. In the drivers’ championship, Antonio Giovinazzi (Jagonya Ayam with Carlin), Charles Leclerc (Van Amersfoort Racing) and Jake Dennis (Prema Powerteam) all hope for finishing second behind the new FIA Formula 3 European Champion, Sweden’s Felix Rosenqvist (Prema Powerteam). Meanwhile George Russell (Carlin), Lance Stroll (Prema Powerteam) and Alexander Albon (Signature) all still have the chance of securing the second position behind Leclerc in the rookie ranking. And behind team champions Prema Powerteam, Jagonya Ayam with Carlin will battle it out with Van Amersfoort Racing for second place in the team championship.

The battle for second place in the drivers’ championship arguably will be the most exciting one as the gap between the currently second-place driver, Antonio Giovinazzi, and his toughest rival, Charles Leclerc, amounts to just six points. While Jake Dennis, currently fourth, has to score 29.5 points more than Giovinazzi if he wants to become the 2015 vice-champion. Giovinazzi and Leclerc in particular demonstrated in the first FIA Formula 3 European Championship appearance at the Hockenheimring earlier this season that the GP circuit located not far from Heidelberg suits them well. They both made it to the podium in all the three races and won one of them each. While Dennis came close to making it to the podium once by finishing fourth, on the race weekend in early May.

George Russell travels to Hockenheim as second-placed driver in the rookie ranking, with a 21.5-point lead over Lance Stroll in third position. Meanwhile, the gap of fourth-placed Alexander Albon to Russell amounts to 54.5 points. Of the three drivers, Lance Stroll has the fondest memories of Hockenheim as he already finished sixth in two races, there. In addition, Stroll recently delivered in fine style. In the six races contested after the summer break he secured four podiums.

The battle for second place in the team ranking will be contested by Jagonya Ayam with Carlin and Van Amersfoort Racing. The Dutch squad is contesting the season with the three rookies Charles Leclerc, Alessio Lorandi and Arjun Maini and travels to Hockenheim with a 30-point gap to the second-placed British team that will be represented by Antonio Giovinazzi, Gustavo Menezes and rookie Ryan Tveter.

The grid for the FIA Formula 3 European Championship season finale once again also will feature HitechGP and ArtLine Engineering. British team HitechGP that also contested the race meeting at Portimão will enter a Dallara for Alexander Sims and Russia’s ArtLine Engineering squad even will contest the race weekend with two cars. The two in-house design chassis’ – Type 315 – will be raced by Latvian Harald Schlegelmilch and Germany’s Marvin Dienst. For the 18-year old who secured the ADAC Formula 4 title two weeks ago at the same venue it will be the first appearance at the wheel of a Formula 3 racer.

Pietro Fittipaldi (Fortec Motorsports): “It will be our second trip to Hockenheim this year and I hope that I will secure better results than I did in May when I had to retire twice and finished 20th in the third race. The Hockenheimring is a circuit I actually like. Nonetheless, it’s demanding – for both drivers and engineers. When it comes to the setup, you have to find the best possible compromise between maximum top speed for the straights and a lot of downforce for the corners – what could turn out to be quite a challenging task. I think the final two corners will be the crucial sections of the lap. If you get of the racing line in the first you also lose a lot of time in the second. Here, you can both gain or lose a lot.”