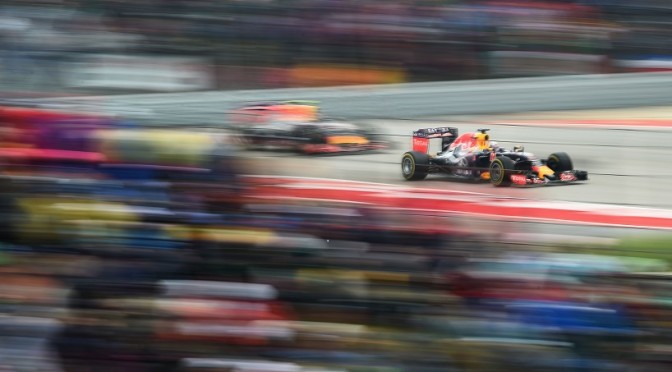 “The beginning was really fun between both Mercs and both Red Bulls. It was a good four-way battle. To see the Mercs not getting away from us was awesome. I was enjoying that. In the lead we were quite quick for a few laps and it felt like old times. That obviously didn’t last long and once we put the slicks on we just didn’t have the pace. We struggled with the warm up with the tyres and also struggled a lot with braking today. It was so tricky in the dry and then obviously there were the collisions with Hulkenberg and Carlos. It went downhill from then on. Even though we were on slicks it was never really dry out there. The kerbs were slippery and there was still a bit of a puddle through Turns 9 and 10, so it was definitely tricky. Dany spun off just in front of me on to the astroturf and into the wall.  It was a crazy race and I hope the fans enjoyed it as it was quite action packed. Lewis definitely deserves the title. This year he was clearly on top of the rest so congrats and hats off to him for being the 2015 champion.”

“The opening laps were mega, it was very enjoyable and it was nice fighting, but then the track dried out. If it was a wet race I felt it could have been a victory today. It’s easy to say that, but there’s no point really, because once it dried out we were an easy target for everyone, which was a bit frustrating. We weren’t able to be as competitive in the dry as in the wet so we’ll have to have a look at that. In the dry, I was driving a bit over my limit when I crashed, I put the wheels on the artificial grass, tried to carry a bit more speed but it didn’t work out and I’m disappointed with myself. Finally, congratulations and well done to Lewis on winning the Drivers’ championship, he’s done a really good job this year.”

CHRISTIAN HORNER, Team Principal: “During the first half of the race the performance of our cars looked really encouraging. We were very competitive on the intermediate tyres, which allowed Ricciardo to take the lead and build on it, before we made a double stop, bringing both cars in together. The mechanics worked very well to turn them round with Kvyat in third place. So we looked in good shape at that point, but unfortunately, our pace on the dry tyres was simply not as competitive as the Mercedes and the Ferrari. In particular, we struggled to get the tyres up to temperature at the re-starts, especially after the second Safety Car period. After that, our race unravelled with Daniil’s accident, which caused the final Safety Car. Daniel was involved in a collision with Sainz and that meant he needed a further pit stop, after which he fought back to grab the last available point on the last lap. A disappointing finish after a strong start. Finally, congratulations to Lewis Hamilton on defending his World Championship title, the first British driver to do that. He’s a deserving champion.”

MATTHIEU DUBOIS, Renault: “It was a hard work for a single point in the end and far from what we expected after qualifying with both cars on the second row. However, there are some positives to take out of this very wet weekend: firstly all four Renault-powered cars raced reliably from an engine point of view, and we congratulate our sister team for their fourth-placed finish. Secondly we managed to put on a good show and gave Mercedes a run for their money during the early stages of the race. Lastly there is no reason why the performance shown during the first half of the race cannot be repeated to achieve much better next week in Mexico.”