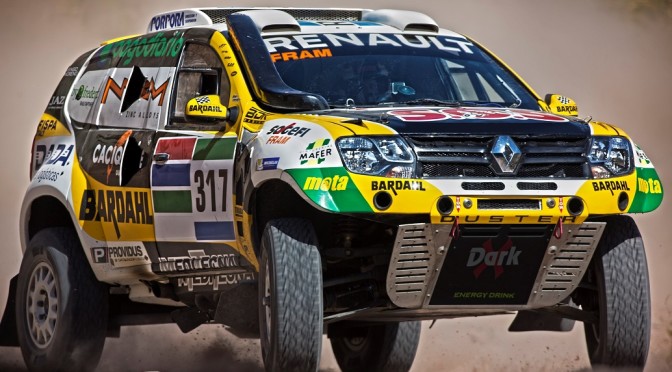 Renault Duster Dakar Team’s fourth attempt at the Dakar will seek to build on the experience gained during the past three events in a bid to finish inside the overall top-10.

The two-car line-up features drivers Emilio Spataro and Frenchman Christian Lavieille, along with their respective co-drivers

Benjamin Lozada and Jean Michel Polato.Renault Duster Dakar Team stands out as one of the 2016 event’s most competitive entries and enjoys the support of the brand’s motorsport division, Renault Sport Technologies, which has brought its technological expertise and cross-country rally experience to the table.

The following January saw Emiliano Spataro and Benjamín Lozada use this experience to claim 14th overall and fourth in Class 1.
In 2015, the team’s third straight participation with the Renault Duster was rewarded with the best result for an Argentine team and, for the second year running, for an all-Argentine crew in an Argentine-prepared car.
Meanwhile, Spataro and Lozada were the event’s second-best Argentine finishers after coming third the previous year. They also obtained five top-10 stage finishes, including two inside the top three and another inside the top five.
For the 2016 Dakar, Renault Sport Technologies has once again brought its experience of cross-country rallying and advanced technology to the table.

The team’s preparations ahead of the Dakar focused notably on reducing the Duster’s weight, improving its chassis and increasing the power output of its Renault-Nissan Alliance VK-50 V8 engine to 387hp.

Recent months have been spent providing in-depth training to the 30 mechanics, technicians and engineers who will care for the two Dusters during January’s rally. Work has also gone into consolidating the team’s logistics.

The 2016 Dakar promises to be another extremely challenging marathon and will feature competitive action in Argentina and Bolivia.

To coincide with the 2016 Dakar, Renault has introduced the new limited-edition Renault Duster Dakar. Based on the model’s Dynamique equipment level, it incorporates a number of embellishments to underline the model’s sporty look.

The Renault Duster Dakar sits on exclusive, black, 26-inch diamond-effect wheels, while the ‘Dakar Spirit’ badging and ‘Dakar’ logo visible on the sills and beneath the door mirrors respectively point to the car’s adventurer credentials.
Inside, the Duster’s comfortable, roomy cabin features a number of styling details which fit perfectly with the Dakar spirit (Dakar logo on the front head rests and steering wheel, exclusive upholstery and colour detailing on the door panels and dashboard).

In addition to the rally’s visits to Villa Carlos Paz, Rosario and Salta (rest day), the brand has organised encounters along the route with customers and fans who will be able to take part in a range of games and other activities