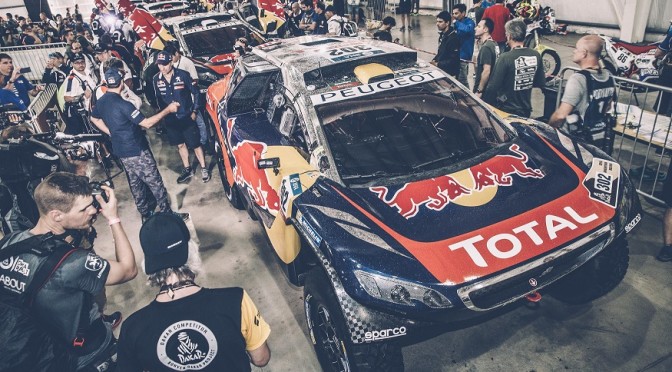 AWAITING THE START OF THE DAKAR 2016 RALLY

It takes an entire year to prepare for the toughest race on the planet – and finally the wait is over as the bravest petrolheads in the world rev up their engines on the start line of the 2016 Dakar Rally. Among the 556 competitors signed up for the gruelling two-week challenge in South America are the Red Bull Desert Wings squad. Ranging from battled-hardened veterans to wide-eyed rookies, the Desert Wings are aiming for the top prize in all four categories at this year’s desert classic.

As the various crews arrived in Buenos Aires during the final days of 2015 to complete the necessary pre-race scrutineering checks, the most relaxed customer was undoubtedly Nasser Al-Attiyah. The reigning champion returns with co-driver Mathieu Baumel and the MINI that has accompanied them on a serial winning streak, which started in South America 12 months ago.

Also racing MINIs this time round will be Red Bull-backed Polish drivers Adam Malysz andKuba Przygonski, accompanied by Xavier Panseri and Andrei Rudnitski respectively. Adam, a multiple Ski Jump World Cup winner, is back for his fifth Dakar while Kuba is on four wheels for the first time after successfully completing the bike race five times, including a pair of top-10 finishes.

Team Peugeot-Total have a new car and some fresh faces as they return to the race following a mixed bag of results last time out. Sébastien Loeb has joined the ranks of motorsport royalty thanks to his nine consecutive World Rally Championship titles, and there’s plenty of intrigue surrounding his first attempt at the Dakar. Sébastien takes the wheel of his PEUGEOT 2008DKR16 alongside long-standing co-driver Daniel Elena. Elsewhere in Peugeot’s stellar line-up are three crews with 17 Dakar victories between them: Stéphane Peterhansel/Jean-Paul Cottret, Carlos Sainz/Lucas Cruz and Cyril Despres/David Castera.

Looking to nudge past both the Peugeot and MINI challengers will be the Toyota Hiluxes ofGiniel de Villiers and Marek Dabrowski. Giniel, along with co-driver Dirk Von Zitzewitz, is a former Dakar champion and has also claimed three second-place finishes in the past five editions of the race. Marek and his right-hand man Jacek Czachor were the best-placed rookies with seventh place at the 2014 Dakar, and once again have their sights on the top 10.