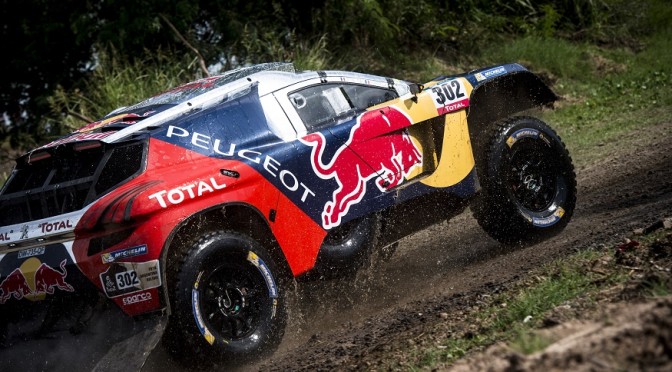 The 38th edition of the Dakar Rally got underway with a fast-paced opening stage. In action on the first day were the Red Bull Desert Wings competitors as they posted impressive results across all four categories.

Nasser Al-Attiyah got the defence of his Dakar title underway with a fourth place finish on the stage. A steady drive alongside French co-driver Mathieu Baumel ensured the Qatari finished just five seconds off stage winner Bernhard ten Brinke.

Peugeot Sport director Bruno Famin was also satisfied by the day’s work of his four crews on the sprint stage on the outskirts of Arrecifes, a town in the north of the Greater Buenos Aires province. Spaniard Carlos Sainz clocked the stage’s second-fastest time while his trio of French team-mates Cyril Despres, Stéphane Peterhansel and Sébastien Loeb all finished exactly nine seconds off the race’s early leader. A top-10 finish for Loeb and co-driver Daniel Elena on their first Dakar stage shows that the nine-time WRC winners are up for the fight.

The Toyotas of Marek Dabrowski and Giniel de Villiers recorded very similar times to the Peugeot crews while the two Polish driven MINIs of Adam Malysz and Kuba Prygonski stayed within half a minute of ten Brinke.

Over in the bike race all of the riders harbouring realistic ambitions of glory made a solid start with Honda’s Joan ‘Bang Bang’ Barreda sharing the stage win with Ruben Faria. The third quickest time of the day was recorded by Portugal’s Hélder Rodrigues and his Yamaha.

The four Red Bull KTM Factory Team riders reached the finish line well within reach of the early leaders. Jordi Viladoms, Matthias Walkner and Toby Price are within 20 seconds of Barreda while France’s Antoine Méo and fellow debutant Iván Cervantes of Spain, also onboard KTM machinery, will be happy to have survived their first day of racing at the Dakar. Méo lost 45 seconds underestimating his first Dakar river crossing, as his rally raid education continues.

Argentina’s Marcos Patronelli completed the quad stage with the second-fastest time of the day. Also in close attendance at the front of the race was Mohamed Abu Issa, as he stayed within 30 seconds of Marcos to underline his own credentials as a serious contender in 2016.

As a result of a serious accident during the prologue the timed section was cancelled for the trucks.

Today’s results on the prologue stage now shape the starting order for tomorrow’s stage running between Rosario and Villa Carlos Paz. With competitors fully in gear the distances rocket up, with around 250km of timed racing for all four categories on Sunday across some of the race’s fastest terrain.