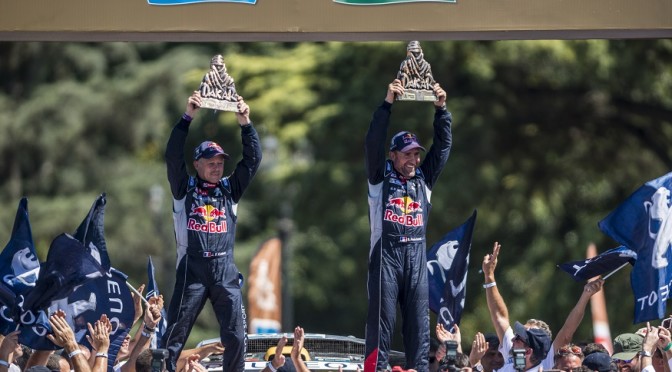 After a gruelling Dakar journey of 9,500km through Argentina and Boliva a trio of Red Bull Desert Wings have emerged victorious across the car, bike and quad categories. Frenchman Stéphane Peterhansel cemented his title of Monsieur Dakar with his sixth car win while Australian biker Toby Price won the rally for the first time. The crowds at the finish line in Rio Cuarto, Argentina also had a local hero to cheer home as Marcos Patronelli won the quad category for a third time.

Stéphane Peterhansel is a man who has been there and done it when it comes to the Dakar. After winning the bike race six times he made the switch to four wheels. Little time was wasted in mastering the new discipline and his victory today makes it six wins in the car race and 12 Dakar triumphs in all. Peterhansel’s latest win came behind the wheel of the fearsome Peugeot 2008DKR16, the car that has led the contest since the first day thanks also to fellow Team Peugeot-Total drivers Sébastien Loeb and Carlos Sainz.

Pulling up behind the Peugeot of Peterhansel and co-driver Jean-Paul Cottret on the finalised car podium were a pair of former champions: Nasser Al-Attiyah/Mathieu Baumel in second andGiniel de Villiers/Dirk von Zitzewitz in third.

The recent withdrawals of five-time Dakar winners Cyril Despres (seventh overall this time in cars) and Marc Coma (now the event’s sporting director) from the bike race left the category wide open heading into this year’s contest. Stepping up to the plate for the Red Bull KTM Factory Team and securing the Austrian manufacturer a 15th consecutive Dakar win was Toby Price. A podium finish during his Dakar debut 12 months ago had already marked Price out as an exceptional talent. Now the Australian has picked up his first Dakar victory: the only question that remains to be answered is how many titles will he go on to win in the future?

Just like Peterhansel and Price, Argentine quad biker Marcos Patronelli used the second week of the Dakar to build up an unassailable lead at the front of the race. There was an outpouring of emotion at the finish line as Patronelli got his hands on his third Dakar title and was followed home by his brother Alejandro in second place.

Over in the truck race Team Kamaz Master ended up running out of stages as they attempted to reel in long-time race leader Gerard de Rooy. Ayrat Mardeev offered a fine defence of the title he won last year but when the race was run the Russian had to settle for second overall.

Our final congratulations has to go to all the competitors, event organisers and fans that make the Dakar Rally a truly special event. In the world’s toughest race things are always being pushed to the very limit and the Dakar remains motorsport’s ultimate test of endurance.