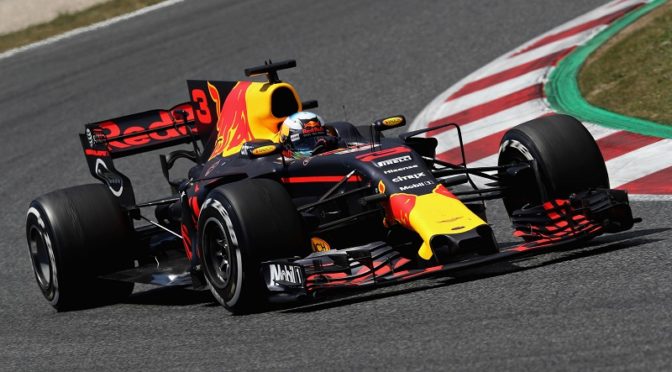 DANIEL RICCIARDO, Finish Position: 3rd, Start Position: 6th
“I’m happy to be back on the podium today, it’s the first one of the season for me which is nice but actually the race was quite a lonely one. I didn’t have any real battles and my race was more about trying to keep a rhythm and maintain concentration. I got a bit fortunate with Valtteri’s problem towards the end of the race which bumped me up to third, but of course I’m still happy to be up there again and see all the smiles from the team. Today we will enjoy the podium but tomorrow we need to understand how to further close the gap to Ferrari and Mercedes. I want to take the positives from this weekend, we will keep working hard and chipping away. I don’t think it’s impossible to catch the leaders at some point, maybe it will take a little longer than we had hoped but we will get there. I think I got the maximum out of the car today and moving on to Monaco we will have a few more updates, which will hopefully give us another step, and at that track it’s fair to say anything can happen.”

MAX VERSTAPPEN, Finish Position: DNF, Start Position: 5th
“An unfortunate start to the race which ultimately finished it also. I tried to go around the outside as there was plenty of room there. If Valtteri had not touched Kimi, we all would have had enough room to get through that corner. Due to the contact it meant Kimi lost control and slammed into me, but it wasn’t his fault. Sometimes you have a bit of luck, like last year, sometimes you don’t as we can see this year. It was shame to not be able to take part in the race after the incident as I think with this weekend’s upgrades it could have been fun and we could have got a good result. After an unfortunate race for me it’s important to focus and look ahead to Monaco, I’m hoping we can continue to improve and have a good fight there.”

CHRISTIAN HORNER, Team Principal: “Daniel drove a good race today, quite a lonely race for him and unfortunately we didn’t have the pace to go with the leaders but we obviously benefitted from Bottas’ retirement for him to record his first podium of the year which was great to see. Max made a good start and after committing to the outside of turn one he was the unfortunate victim of Valtteri hitting Kimi who in turn went into him and broke his front suspension causing his retirement, a great shame for him. Looking at the weekend as a whole, we’ve definitely put some performance on the car, as we have done after every race this season but we are well aware we’ve still got a lot to do. Now we look ahead to the most prestigious race on the calendar in Monaco and hope we can continue the performance trend and put in a positive show there.”