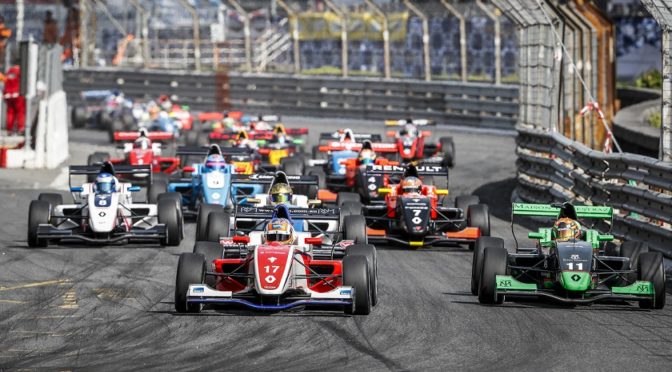 Alex Peroni (Fortec Motorsports) brought R-ace GP’s 2017 invincibility to an end. After obtaining his first pole position this morning, the Australian scored his maiden victory in the Formula Renault Eurocup on the streets of Pau ahead of Sacha Fenestraz (Josef Kaufmann Racing) and Robert Shwartzman (R-ace GP), who now leads in the general classification. Renault Sport Academy driver Max Fewtrell (Tech 1 Racing) took his fourth success in the rookie category this season.

Alex Peroni (Fortec Motorsports): “It is a very physical circuit and Sacha pushed me to the limit. I chose the centre of the track for the start, but I locked up the wheels at turn one. Sacha got alongside me and it was a drag race for the lead before the yellow line ahead of Pont Oscar. It was tight, but I managed to keep the lead. I then had to maintain the pace to win the race. It is a special feeling. We know now that we can win. This will give us additional confidence heading to Monaco next week.”

Sacha Fenestraz (Josef Kaufmann Racing): “Finally back on the podium! I didn’t get a very good start. I had a lot of wheel spin, but Alex locked up his wheels and went a little wide at turn one. I dove to the inside to get alongside. We were so close to each other that I went on the sidewalk, but I didn’t find an opening before the yellow line. It was still a good race. Thanks to the traffic, I could close the gap and apply pressure, but there were no overtaking possibilities. Last year, I had a great race in Monaco. We have to keep working to get the first win of the season and catch up to the leaders!”
Robert Shwartzman (R-ace GP):

I got a good start to protect third place from Will Palmer. I was sliding a lot early in the race and the two leaders pulled away from me. Overall, the race was somewhat monotone and straightforward, but this podium brings a lot of points for the championship. I am thrilled to now be leading the general classification before heading to Monaco. The goal will be the same as it was at Pau; get the best result possible in qualifying before getting a good start. I am full of confidence and hope to be able to battle for the win.”

Max Fewtrell (Tech 1 Racing): “At the start, I was able to pull even with Will Palmer and stayed there for the first two corners. After that, I was positioned behind him at Pont Oscar and stayed there for the rest of the race. Max Defourny was pressuring me, but I wasn’t too worried, because it is so hard to pass at Pau. This weekend, I think the pace was good considering my amount of experience, but we must continue to make progress to get out first podium at Monaco. I’m really looking forward to it!”