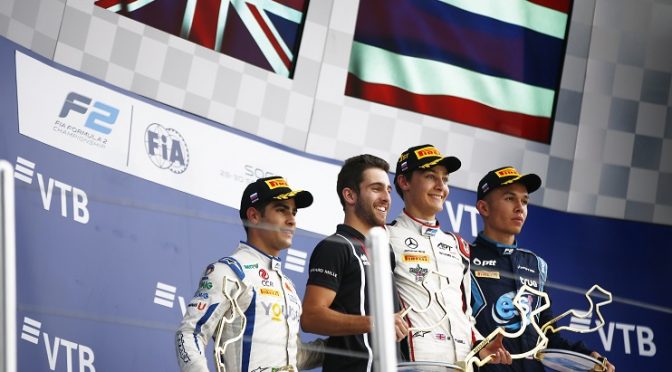 British driver extends championship lead with victory
George Russell braved tough weather conditions in the FIA Formula 2 Championship Sprint Race at Sochi, Russia to claim his sixth victory of the season, overtaking Nirei Fukuzumi and building a lead to cross the line 7.4 seconds clear of Sergio Sette Camara. The Carlin driver battled to his eighth podium position of the year, having the measure of Alexander Albon on the final lap to beat the Thai driver to second.
The race began in dry conditions, and polesitter Fukuzumi avoided the drama in the opening corners to retain his lead, with Nicholas Latifi slotting in just behind as Antonio Fuoco and Alessio Lorandi went wide at turn 2. Immediately after, the Canadian’s race was over after he was rear-ended by a late-braking Lorandi at turn 5, prompting the emergence of a safety car. Full-speed running returned at the beginning of the third lap, where Fukuzumi was immediately under pressure from Russell.
Without DRS to assist him, Russell was unable to find a way past Fukuzumi, but the lap 5 activation helped the ART Grand Prix driver to muscle through and collect the lead of the race. Fukuzumi then began a descent through the field, as Albon cleared Fuoco for fourth – and the Italian was the catalyst for an impressive move by Artem Markelov; as Nyck de Vries passed the Italian into turn 2, Markelov followed suit into the third corner before diving past the Dutchman in the subsequent turn, taking fifth place.
Sette Camara then passed Fukuzumi on lap 7, but was over two seconds adrift of Russell as the British driver sought to extend his championship advantage. Two laps later, a smattering of rain appeared across the circuit and began to intensify, which caught Niko Kari out as the Finn hit the wall following a spin at turn 10. Soon after, Jack Aitken spun and stalled ahead of turn 8, bringing out a virtual safety car. Once the British driver’s stranded car was cleared, the majority of the field began to pit for wet tyres – save for Charouz Racing System pair Antonio Fuoco and Louis Deletraz.
The Charouz duo gambled on the clearance of rain, but instead the two began to plummet down the order – Russell quickly making short work of them, with Sette Camara and Albon soon following suit. With the front three all spread out as they struggled with the conditions, the battle for fifth began to build – Markelov and de Vries fought tooth and nail for position, before they cleared the floundering Fuoco on the eighteenth lap.
By the penultimate lap, Russell had built an almost-eight second lead over Sette Camara, who began to come under pressure from Albon’s late charge. The Thai driver pushed to get to within DRS range, as de Vries dispatched Markelov at turn 5 after the Russian went wide, cementing fourth position.
With nobody really figuring in the battle for victory, Russell collected his sixth win of the season to extend his lead in the championship over Albon to 37 points, as the DAMS ace remains the only other contender for the title after finishing third behind Sette Camara. De Vries was a further ten seconds behind as Markelov took fifth, while Roberto Merhi continued a strong return to F2 with sixth place. Fukuzumi and Dorian Boccolacci completed the scorers, as Fuoco’s slick-tyre gamble left him tumbling out of the points in the final stages.
After a weekend without scoring points, Lando Norris drops out of the title race, although his Carlin team remain ahead of ART in the teams’ standings by 51 points – with DAMS a further eight points behind. The 2018 F2 season will conclude at the Yas Marina Circuit at Abu Dhabi on the 23-25 November.
F1Weekly podcast # 820