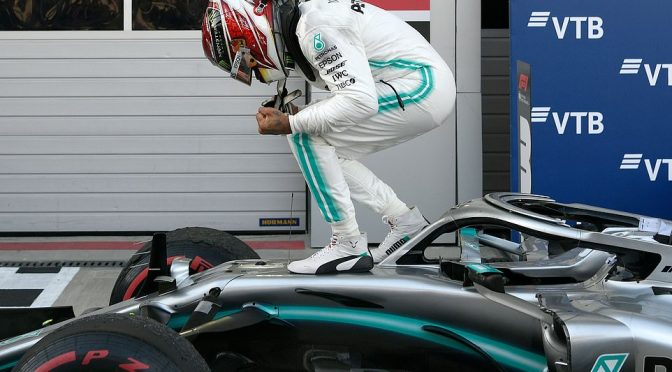 Vettel confirmed Ferrari had an agreement in place for how the drivers would manage the first corner after he was told to let his team mate overtaking him during the Russian Grand Prix.

Vettel, who qualified third, took the lead at the start after passing LCH and Charles Leclerc on the run to turn two. Ferrari subsequently told him to let Leclerc through, but Vettel refused, saying he would have overtaken his team mate anyway.

After the race Vettel, who retired after losing the lead to Leclerc after his pit stop, confirmed the team had an agreement but suggested he had not fully understood it.

“I don’t know exactly what happened there to be honest,” said Vettel. “I think we had an agreement, I spoke in particular with Charles before he race, I think it was quite clear. 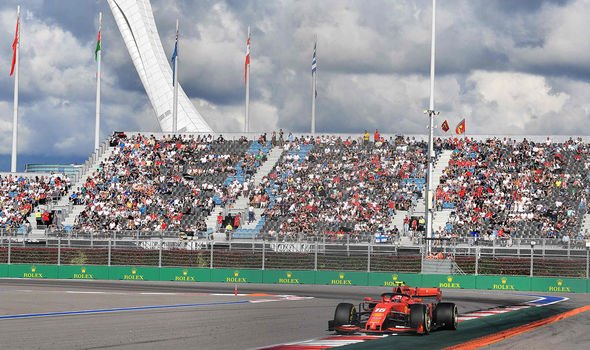 “But I don’t know, maybe I missed something. I’m sure we’ll talk about it. But obviously [it’s] bitter today because we wanted to have one and two.”

Vettel refused to give further details about how the agreement was supposed to work. “That’s not something I want to share, to be honest,” he said.

“I don’t want to put the team in a bad position afterwards because somebody said something here or there. I know it’s not fair because I think people deserve to know. It’s not a big deal.

“Obviously I was in third, Charles was in first and we were talking about a strategy to pass Lewis. Obviously I had a very good start so there were a couple of options on the table. Sorry but I really prefer not to [explain] in a way. 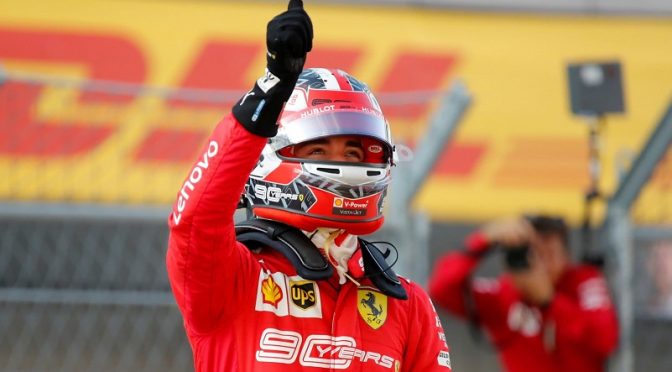 LECLERC ON A ROLL WITH POLE NUMBER FOUR!

The 21-year-old took his fourth pole in a row for Ferrari as Lewis Hamilton pipped Leclerc’s team-mate Sebastian Vettel to second, 0.402secs adrift of Leclerc.

Verstappen has a five-place grid penalty and will drop down to ninth on the grid as McLaren’s Carlos Sainz was sixth, 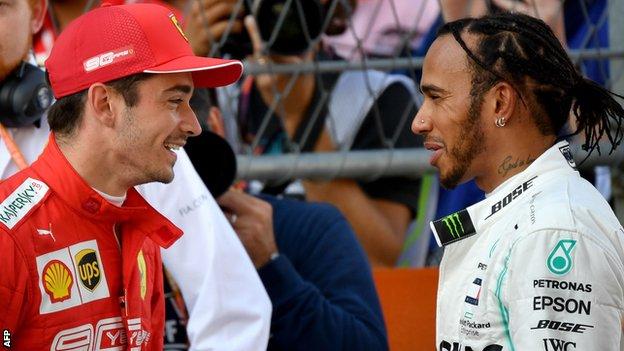 LCH was thrilled to be second on a track where Mercedes did not expect to be able to beat a Ferrari over one lap, and his achievement was a mark of the quality of the world champion’s lap, which was 0.602secs quicker than Bottas.

But the star of the show was Leclerc, the first driver to take four consecutive poles since Hamilton at the end of 2016, and the first Ferrari driver to do so since Michael Schumacher in 2001.

Leclerc said: “The car felt amazing and it feels great to be back on pole but I don’t know whether it is the best track to start on pole – the straight is very long after the start.

“It feels very, very special but I don’t want to think about stats for now. I just want to focus on the job. There is a long way to go tomorrow and it is a good start. we have been competitive all weekend and the race simulation seems good too.” 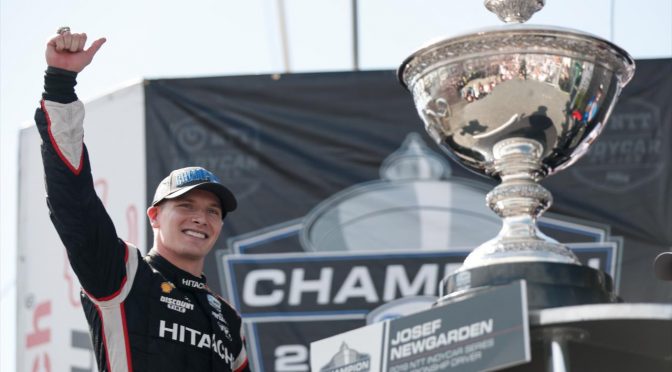 MONTEREY, Calif. (September 22, 2019) – The victors in Sunday’s Firestone Grand Prix of Monterey season finale at WeatherTech Raceway Laguna Seca provided a strong look into the present and future of American talent in the NTT IndyCar Series.

Team Penske’s Josef Newgarden (No. 2 Hitachi Chevrolet), a 28-year-old from Hendersonville, Tenn., is the present. He clinched his second series title in the last three years by finishing eighth in Sunday’s double points race and joined Sam Hornish Jr. as the only Americans to win multiple series crowns since 1995.

“I guess that’s your role as a champion is to push that message and just to be a positive light for that,” Newgarden said. “That’s really all I can do. I don’t know if I can move the ball further by doing anything else significant. I mean, it’s going to take all of us pushing in this common direction to try and push the sport forward. You know, it’ll take me, it’ll take guys like (Alexander) Rossi and Simon (Pagenaud) and Will (Power), and it will take all of us I think to keep pushing the sport forward, and that’s what we will plan on doing.” 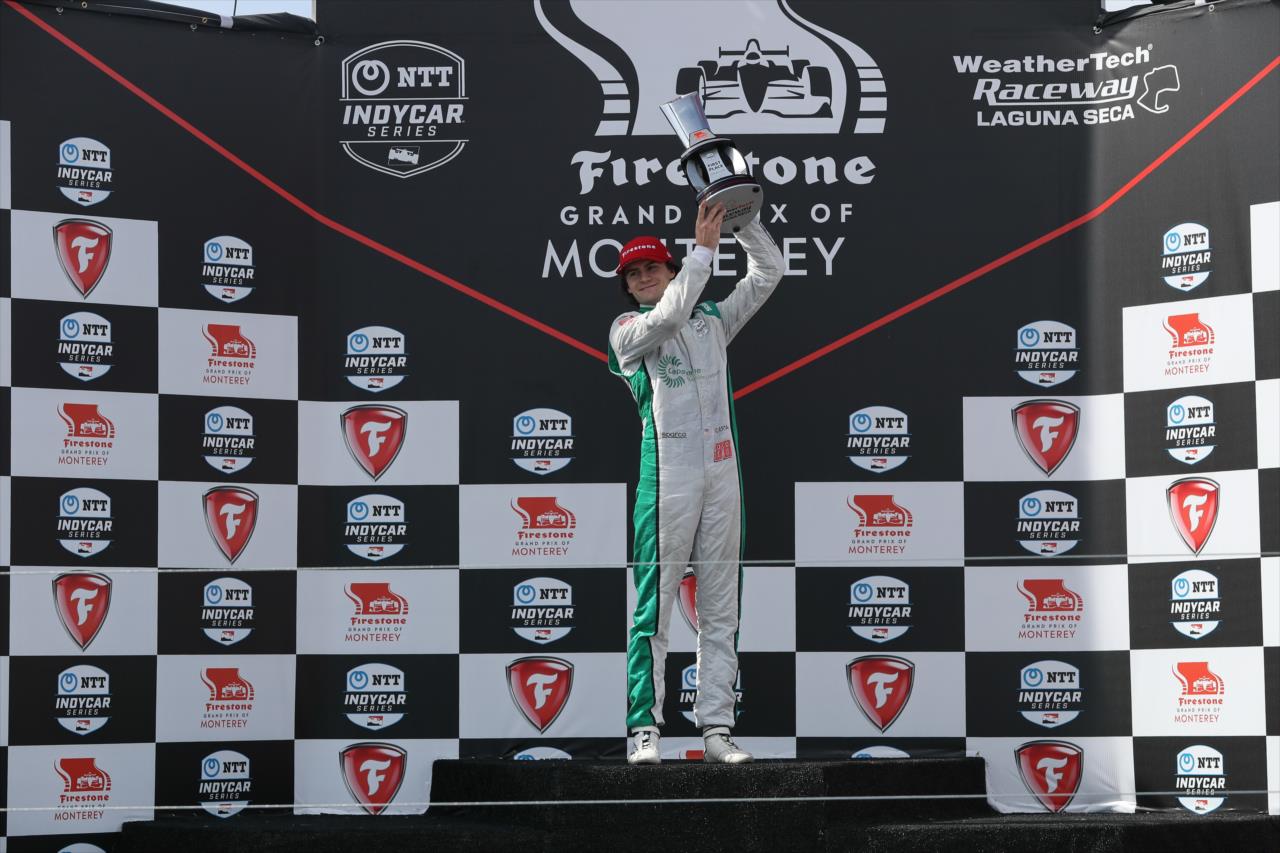 “Josef, a great champion. You can see it in his eyes,” Penske said. “You could see it the first time he won with us, and with Will and Simon, who just had an outstanding season, when you think about three wins and certainly the Indy 500 is the crown jewel that all of us want to have every year.

“But the season was great, the poles and the competition. We’ve got a lot of young drivers coming up, (Felix) Rosenqvist came in, Colton Herta outstanding, and then it’s the (Scott) Dixons and the rest of them that you have to race every single day, and Michael (Andretti) has got a great team, Chip (Ganassi) does, and obviously the folks over at Arrow, and it’s just on and on and on. I probably missed somebody. But the competition has never been better.” 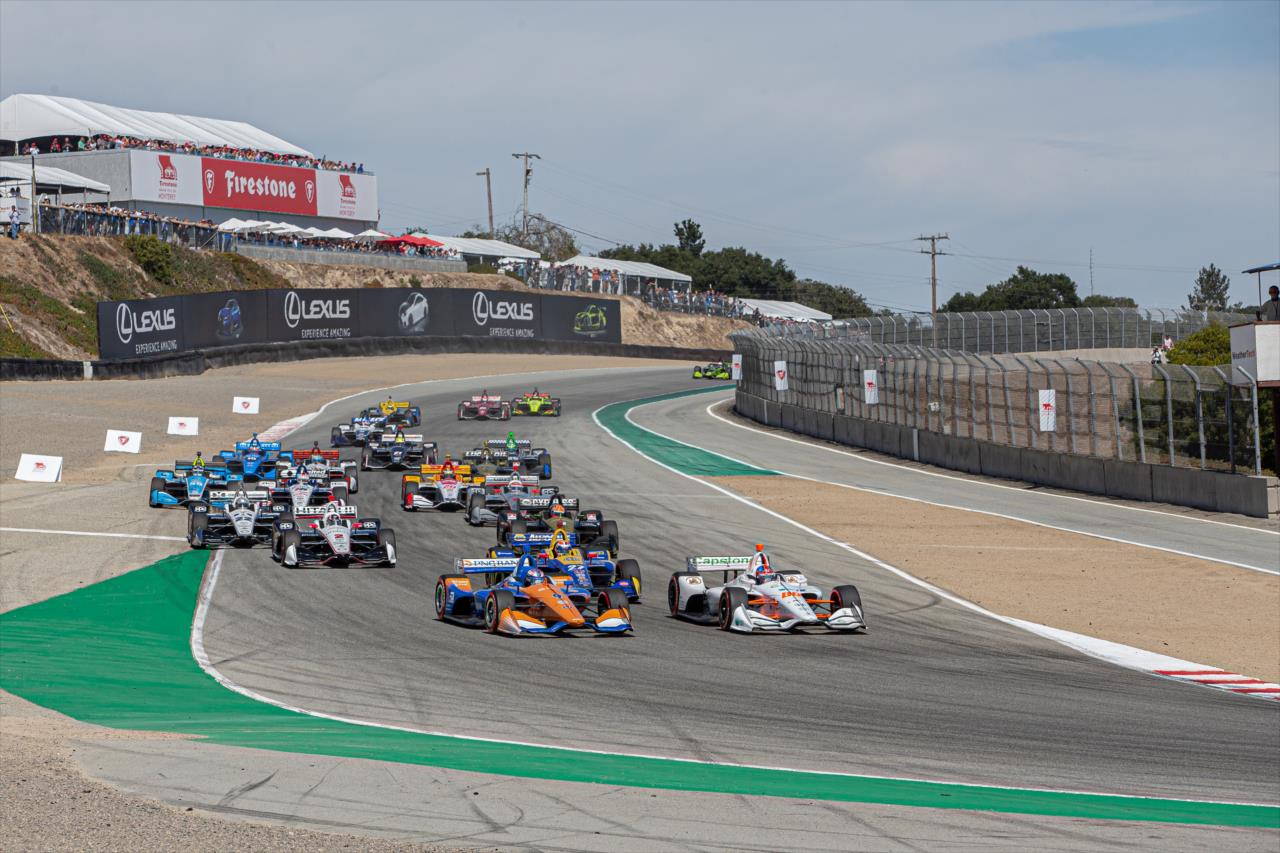 The future is 19-year-old Colton Herta (No. 88 Capstone Turbine Honda), the second-generation Indy car driver whose is the son of Bryan Herta that hails from Valencia, Calif.

The Harding Steinbrenner Racing rookie won the Firestone Grand Prix of Monterey in a dominant fashion, starting on the pole and leading 83 of the 90 laps on the 11-turn, 2.258-mile permanent road course en route to his second win of the season. His first win, which came in March at The Circuit of The Americas, was historic as he became the youngest race winner in the sport’s history.

Herta never was overtaken for the lead on the track – just during pit cycling – as he posted a .5878 of a second margin of victory over runner-up Will Power (No. 12 Verizon Team Penske Chevrolet). Five-time series champ Scott Dixon (No. 9 PNC Bank Honda) finished third as well as fourth in the championship.

“Yeah, it was a perfect race,” Herta said. “Whenever you win an IndyCar race, it has to be a perfect race. You can’t really make mistakes and get away with it, just because there’s always two or three other guys on that day that can win. For sure there were a few guys that could win today, and we just outdid them. We had the pace on them and we were definitely the best today, so we definitely deserved to win.”

Despite a nearly perfect day, Herta was unable to wrestle the NTT IndyCar Series Rookie-of-the-Year honors from Chip Ganassi Racing’s 28-year-old Swede, Felix Rosenqvist (No. 10 NTT Data Honda). Rosenqvist came into the weekend with a 49-point lead over Herta but needed a masterful ride from a 14th starting position to a fifth-place finish that held him off by five points. Rosenqvist finished sixth in the championship standings while Herta took seventh.

“Yeah, that’s still the missing part,” said Rosenqvist referring to a strong campaign despite not having a victory. “I think we had a good chance this weekend, for sure. Yesterday, we were really fast but we had to start from 14th and that’s how it is. At least we made it more exciting with the rookie championship. Colton did an amazing job, his second win this year. I think he’s going to be one to watch next year, so big congrats to him. He did an amazing job this year.”

Newgarden entered the race needing a fourth-place finish to secure the title regardless of the performances of his three fellow contenders, Andretti Autosport’s Alexander Rossi (No. 27 NAPA AUTO PARTS Honda), teammate Simon Pagenaud (No. 22 DXC Technology Team Penske Chevrolet) and Dixon. Rossi came in 41 points behind, Pagenaud 42 and Dixon 85. 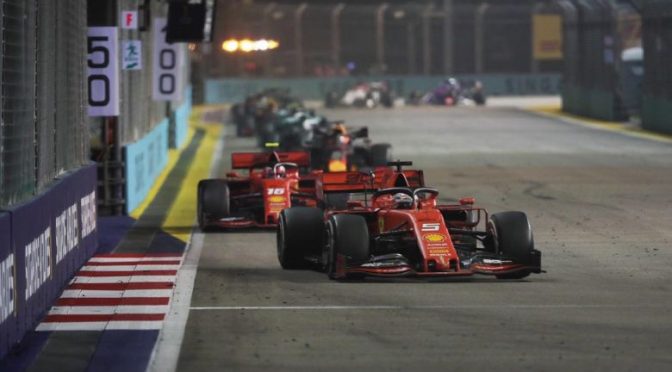 THE FINGER IS BACK LECLERC NOT HAPPY WITH FERRARI STRATEGY!

The four-time world champion jumped a furious Leclerc in the only round of pit stops to take to the top step of the podium for the first time since last year’s Belgian Grand Prix in August. Max Verstappen finished third for Red Bull with Lewis Hamilton only fourth.

LCH had been in contention for victory at the Marina Bay Street Circuit, but a poor strategy by his Mercedes team ensured the championship leader dropped two places. 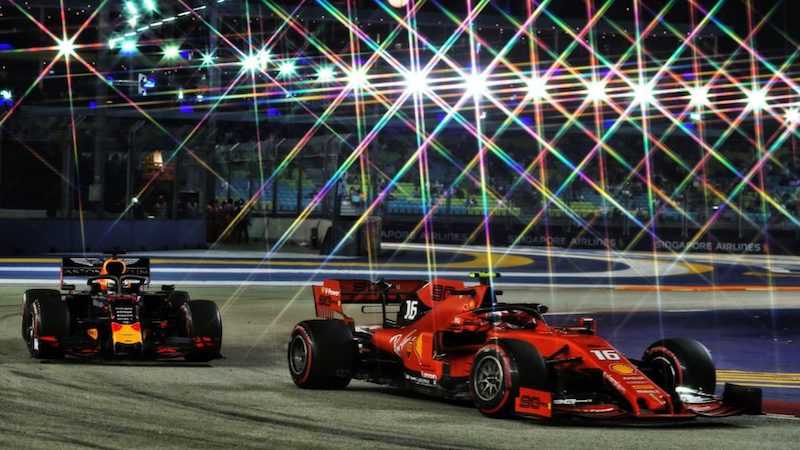 Leclerc, 21, had looked on course to win for a third time in as many appearances after controlling the opening third of the 61-lap race from pole position.

The race turned on its head when Ferrari stopped Vettel for tyres first. Leclerc came in a lap later, but Vettel had taken advantage of his new rubber to leapfrog his team-mate. Naturally, the move by Ferrari angered Leclerc. “To be completely honest with you I don’t understand the undercut,” he moaned over the radio. “We will discuss after the race,” Leclerc added.

Over at Mercedes, the world champions decided to keep LCH on track as their rivals changed tyres, but the 34-year-old was rapidly losing time on worn rubber.

LCH was soon in no-man’s land, and when he did eventually stop, six laps later than Leclerc and seven laps later than Vettel, the Briton re-joined the race behind both Ferrari cars and Verstappen, too. Indeed, LCH only stayed ahead of Bottas for fourth position after Mercedes ordered the Finn to slow down! 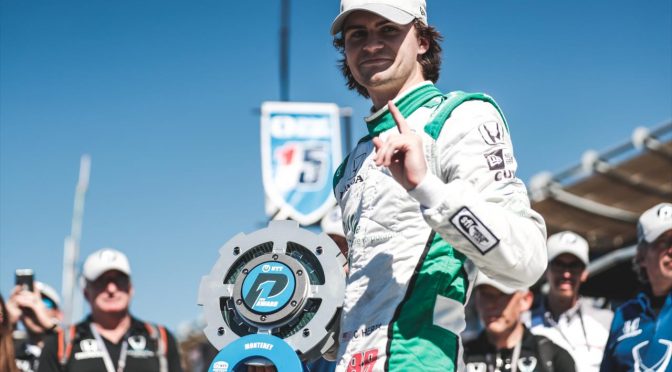 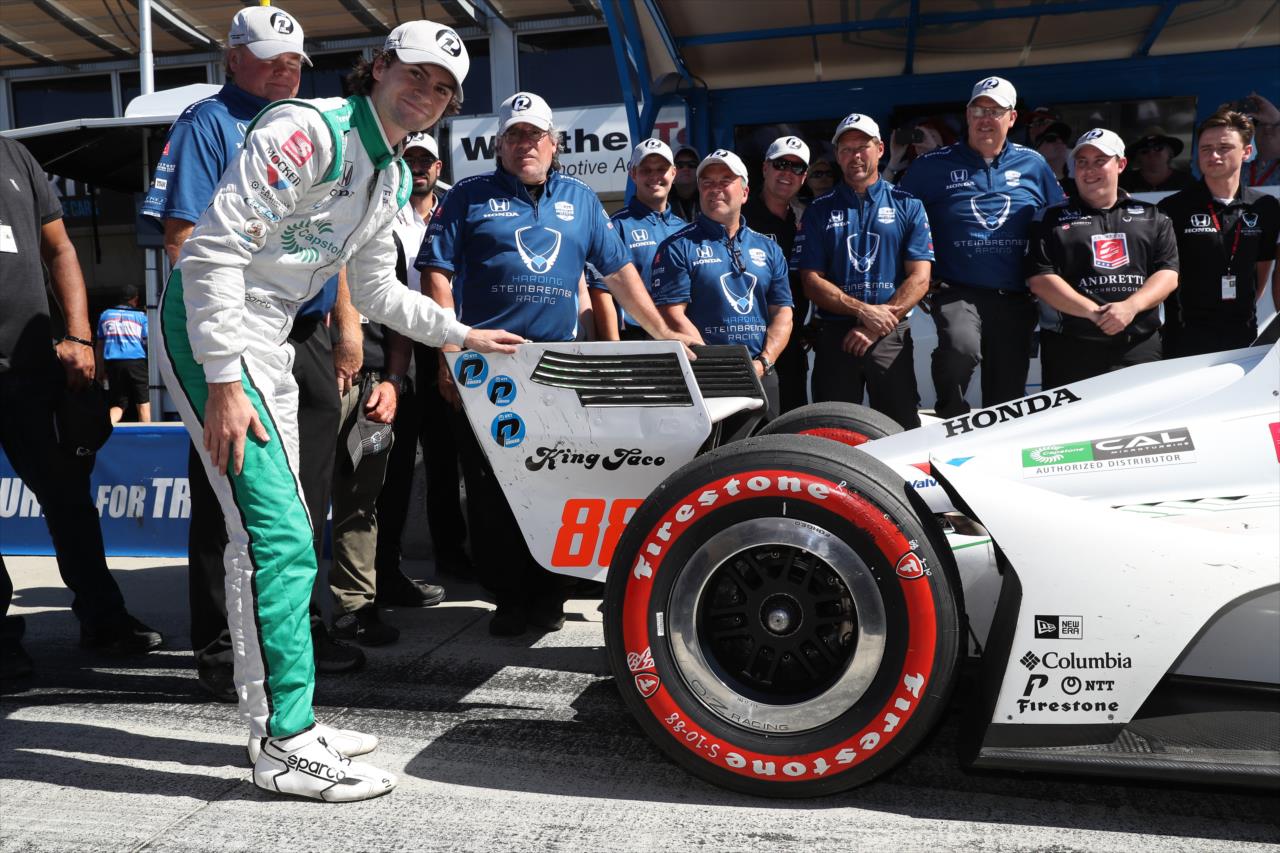 Following his father’s footsteps at this track clearly was meaningful to Herta, who lives with his family in Valencia, Calif.

“Yeah, it obviously means a lot with the family history,” he said. “Fifty percent of (my father’s) Indy car wins came here. It means a lot to kind of keep on the family tradition.”

Herta showed pole-level speed throughout the weekend, yet he wasn’t convinced he would capture the NTT P1 Award as practice transitioned into qualifying Saturday. 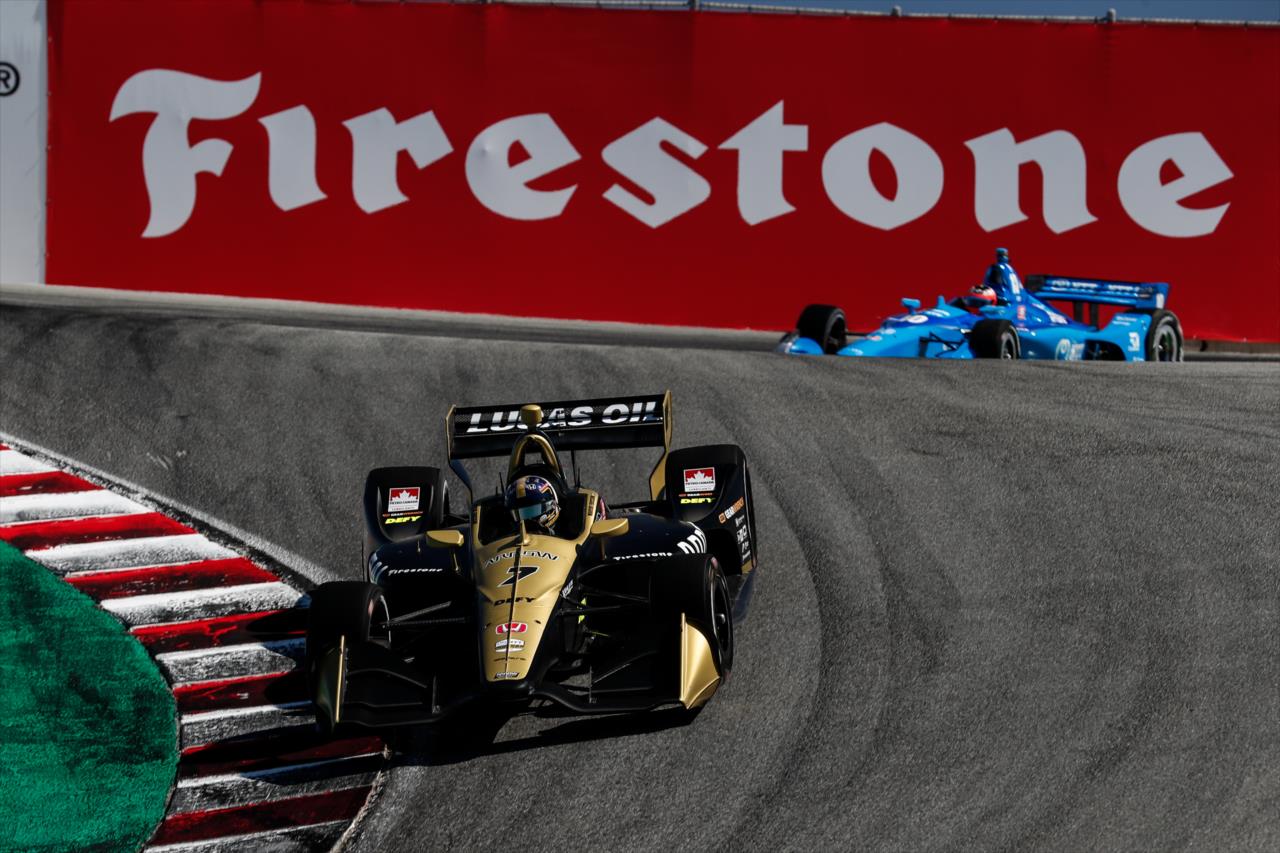 “Honestly, going into (morning practice) I thought maybe we lacked a little bit, and we didn’t have quite as big of a gap (to others),” he said. “We were (seventh) and we needed to find a little bit of time, so I was going to be happy to make it into the Fast Six. That would be an improvement, but we got there and we led every (qualifying) group we were in.”

Herta’s pole-winning lap in the Firestone Fast Six qualifying was 1 minute, 10.1405 seconds/114.867 miles per hour, scoring him a bonus point that could be important in deciding a pair of season winners. Herta might need it to win the rookie award, a championship contender might wish he had it to claim the Astor Challenge Cup.

Herta’s pole also came shortly after he was confirmed to join Andretti Harding Steinbrenner Autosport for 2020. Sunday, he will try to earn his second career NTT IndyCar Series race win after becoming the youngest winner in series history March 24 at Circuit of The Americas in Austin, Texas. He also will try to win a race here as his father did twice (1998 and ’99). 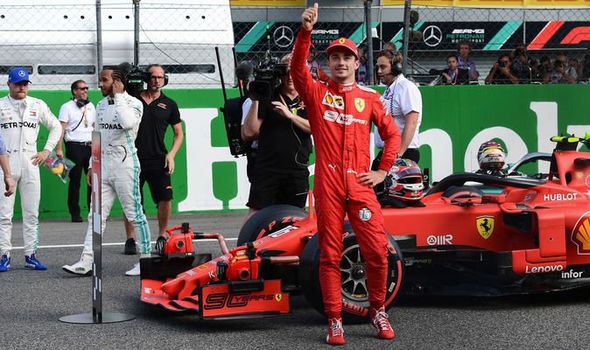 Leclerc secured a hat-trick of pole positions to put his Ferrari at the front of grid for tomorrow’s Singapore Grand Prix.

Formula One’s man of the moment continued his dazzling form under the thousands of bulbs that light up the Marina Bay Street Circuit to see off Lewis Hamilton’s late salvo by just 0.191 seconds.

Sebastian Vettel had been on provisional pole, but he was forced to abort his final run and will start from a disappointing third, with Hamilton splitting the Ferraris.

Leclerc will now be the favourite to secure his third consecutive victory with every pole-sitter, bar Vettel two years’ ago, going on to take the chequered flag here. Red Bull driver Max Verstappen lines up from fourth with Valtteri Bottas fifth for Mercedes.

Ferrari’s machinery was not expected to suit this slow-speed venue, but Leclerc’s fine performance provides them with every chance of securing their third win since the summer break.