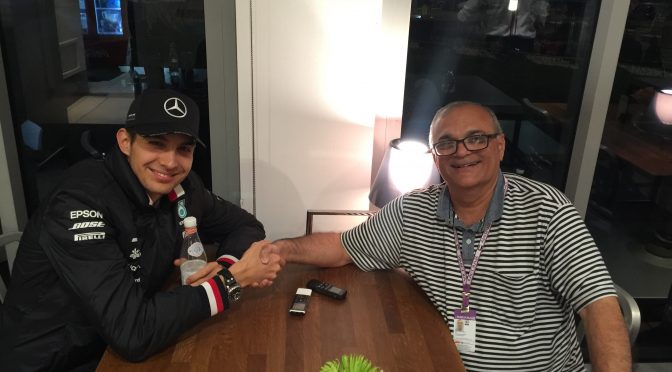 The French Connection. Another first for F1W. Our first ever interview with an active F1 driver. Esteban Ocon was European F3 and GP3 Champion. Highly rated by Motorsports media and, more importantly, by Toto Wolf. Placed at Renault at the expense of Nico Hulkenberg he remains under Mercedes management, and may be seen in Silver Arrows shooting for wins in the near future. 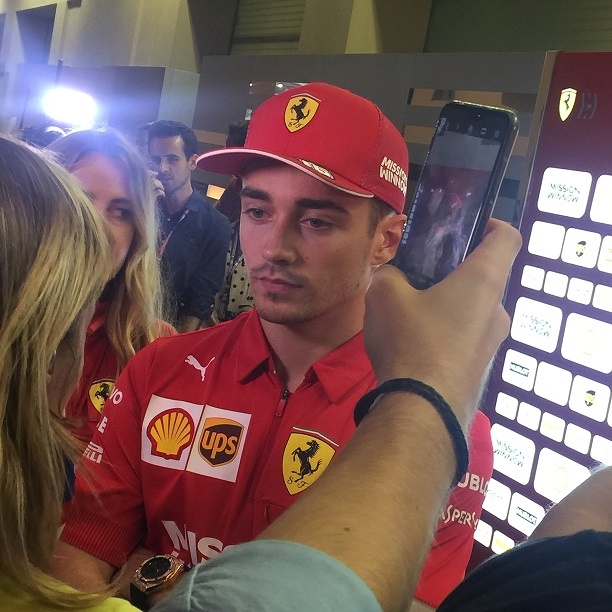 Lights. Camera. Chica. Action. Charles in deep thoughts. ‘I should be taking the photo, baby!’ 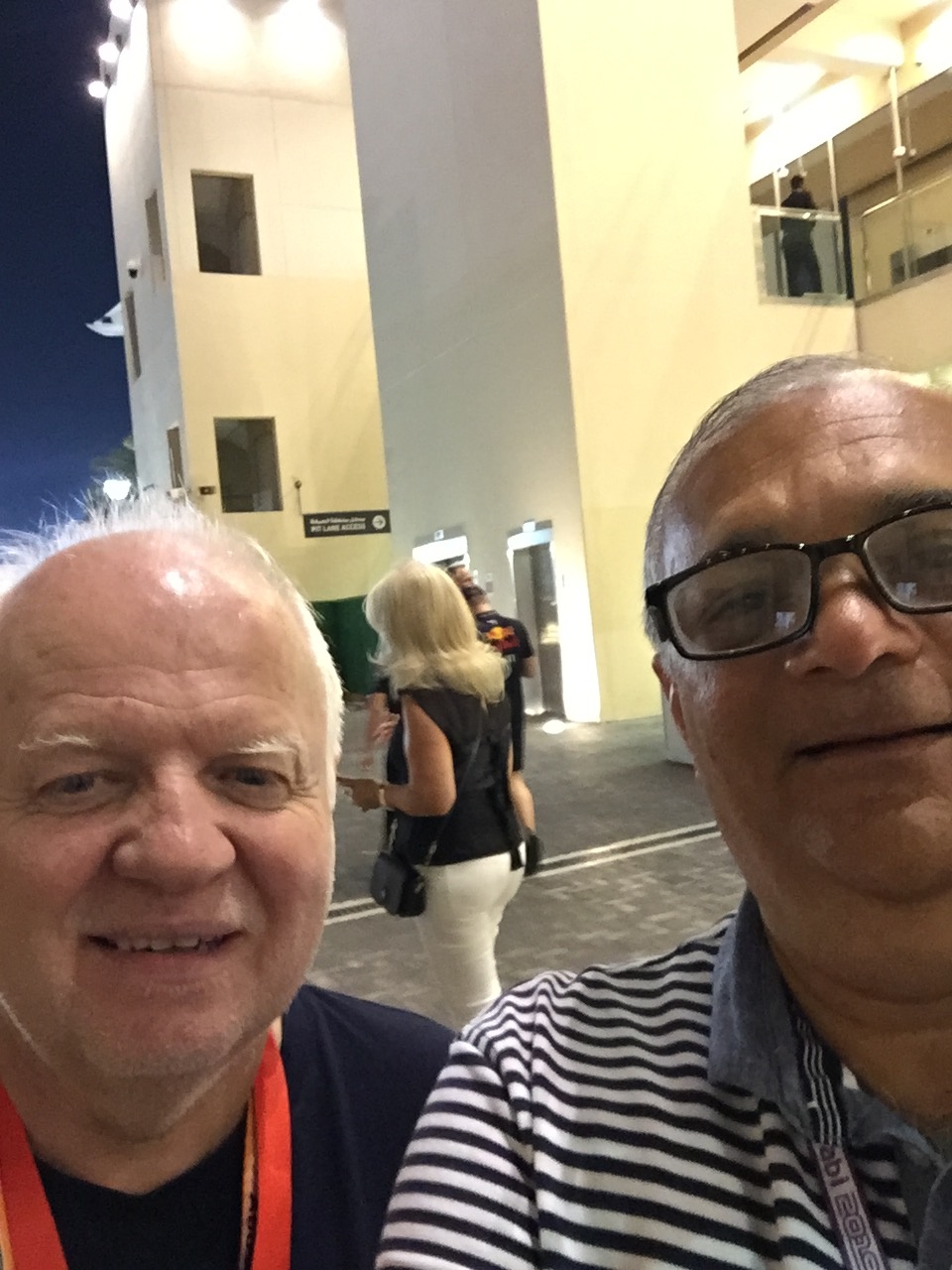 If you can’t meet ’em, meet Papito. Seb’s dad Norbert had a big smile when I asked him if he was at Parco Monza in 2008. Definitely a proud papa. Seb’s son was born last week and in a few years we may see him battling Robin Raikkonen. 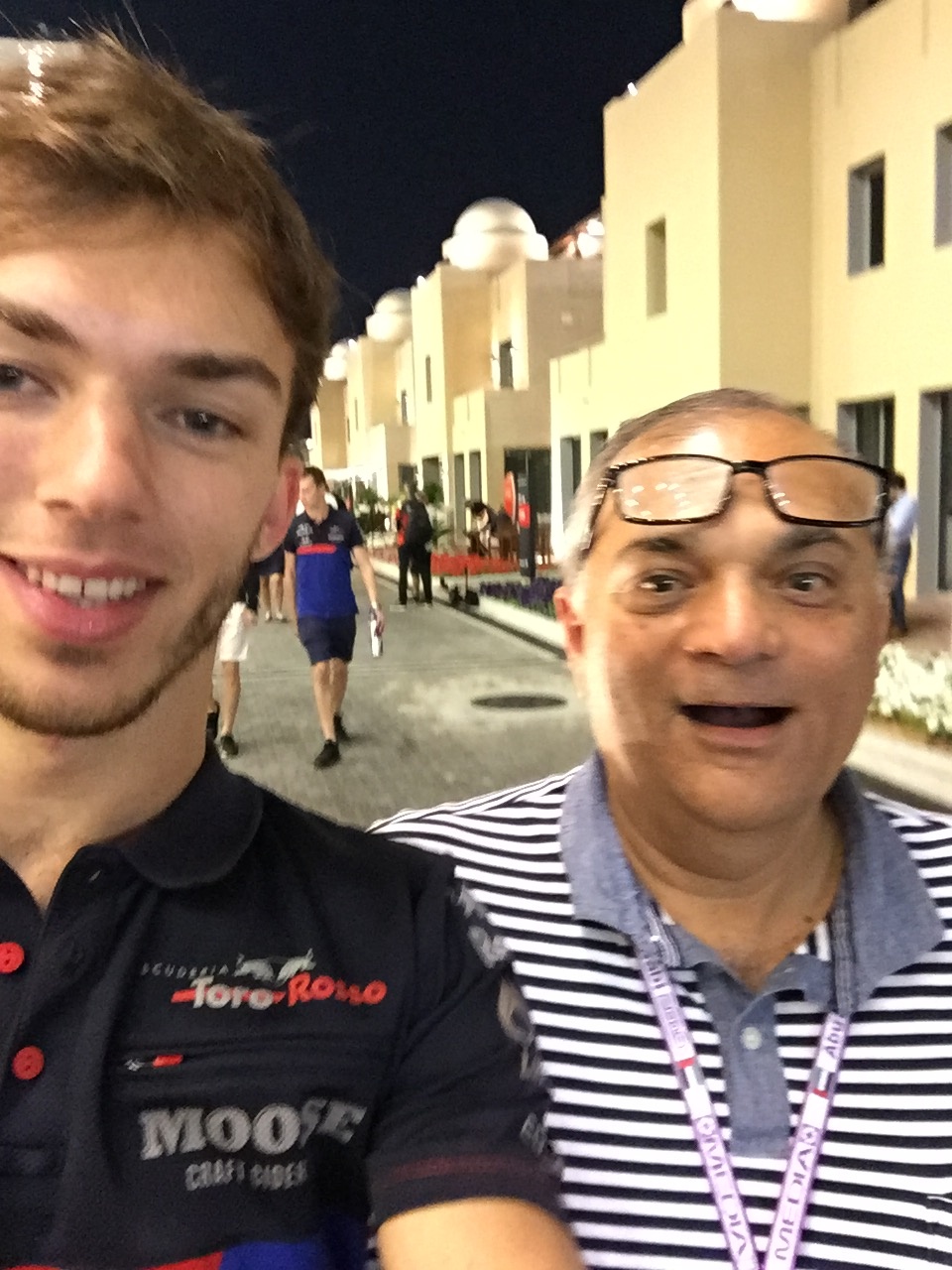 The Podium Pierre. I thought I was the happiest man in Yas Marina till I ran into Racer from Rouen. At Red Bull Gasly had, in the words of DC, the least desirable seat in Formula 1; teammate to Max Verstappen. Toro Rosso has given him new wings. The torpedo is right behind us. 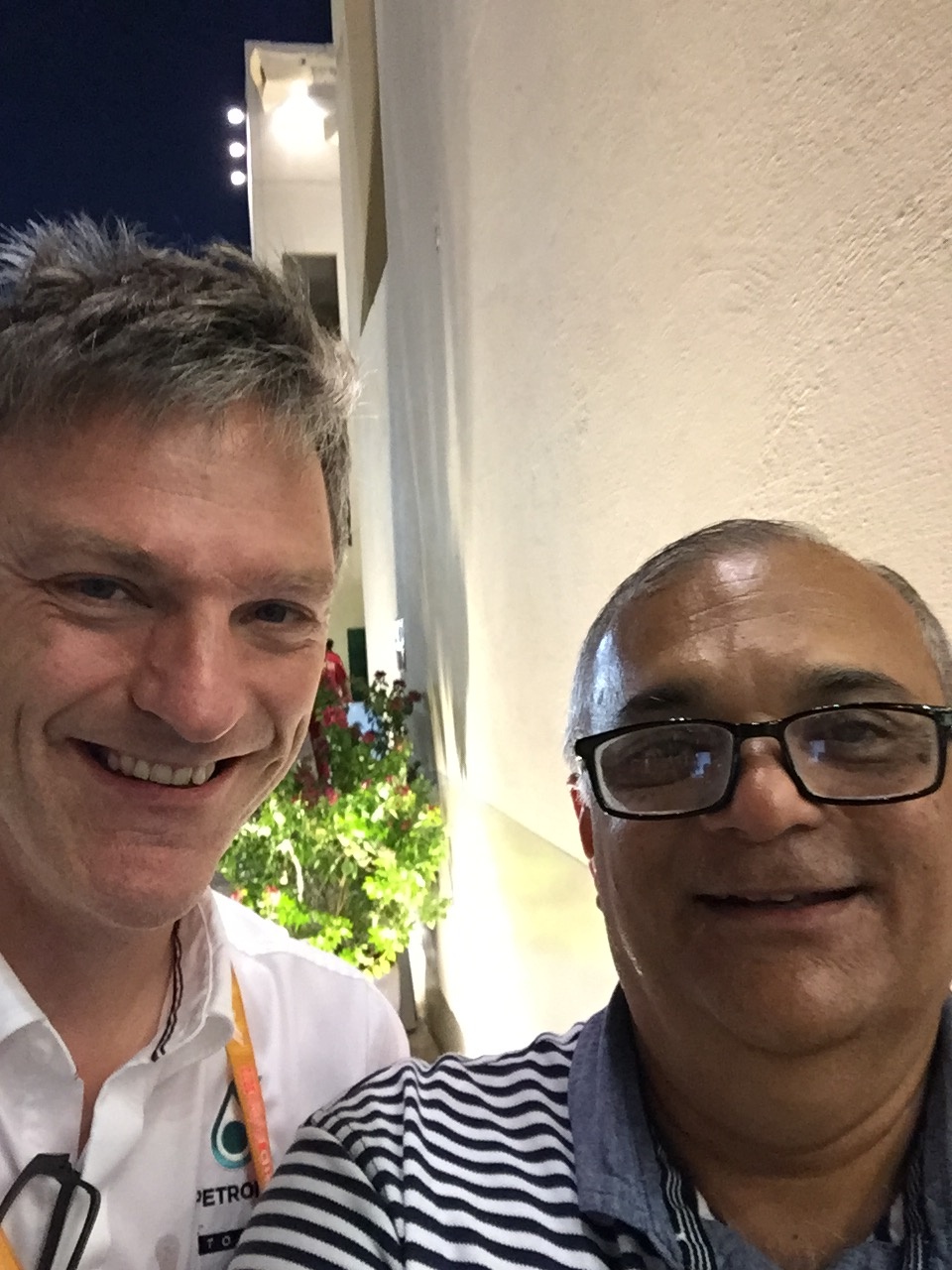 Second and third rate people. I said to James Allison since I can’t get to Lewis Hamilton may I have a photo with you? He goes you mean get second and third rate people. I took the selfie, thanked and walked away. Then realized image was not captured. So I went back to him and requested a take-two and confirmed to him he was correct on our rating. He was kind enough to oblige with a big smile.

Nice to know there is humor in the cut throat world of Formula 1. 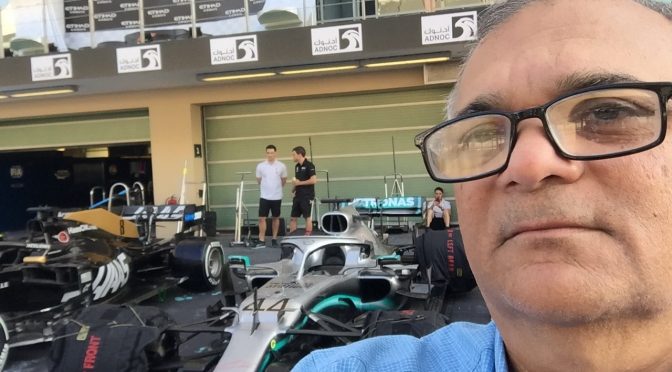 Lucky Shot! Thursday afternoon in Abu Dhabi. Beautiful F1 machinery lined up in the pit lane. Wolf – as in Toto – was not sighted today. His pilots were also not seen in today’s Drivers’ press conference. May be the Lucky One will do the talking on the track. 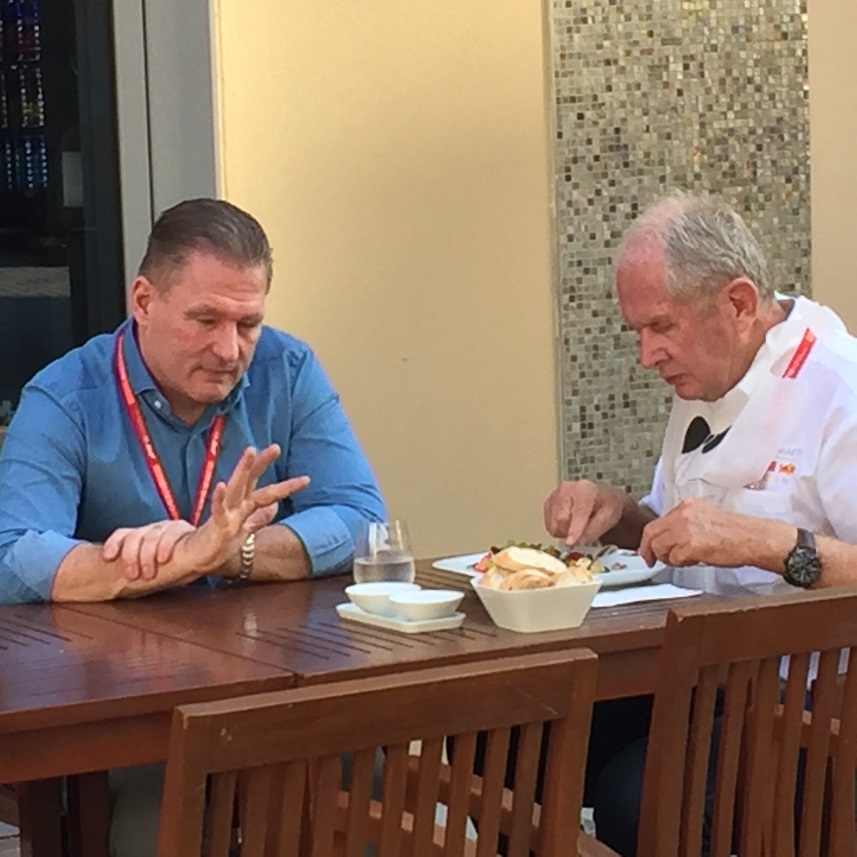 Jos with the real Boss. Papa Verstappen counting the Max championships while Dr Marko devours Denny’s Grand Slam breakfast in the desert. I had a chat with Jos. He politely declined to be interviewed but kindly answered some questions.

If Newey and Honda can provide the package, Red Bull has the Driver for next day early morning delivery. 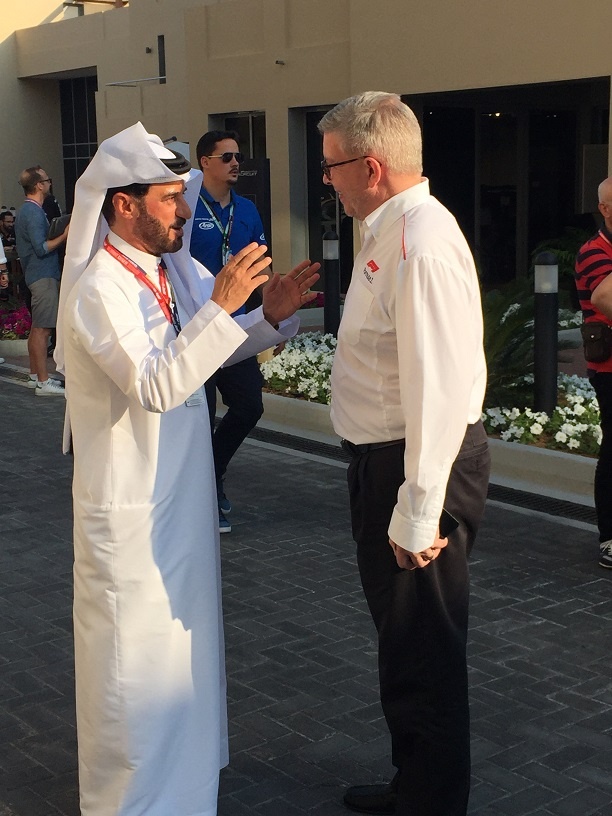 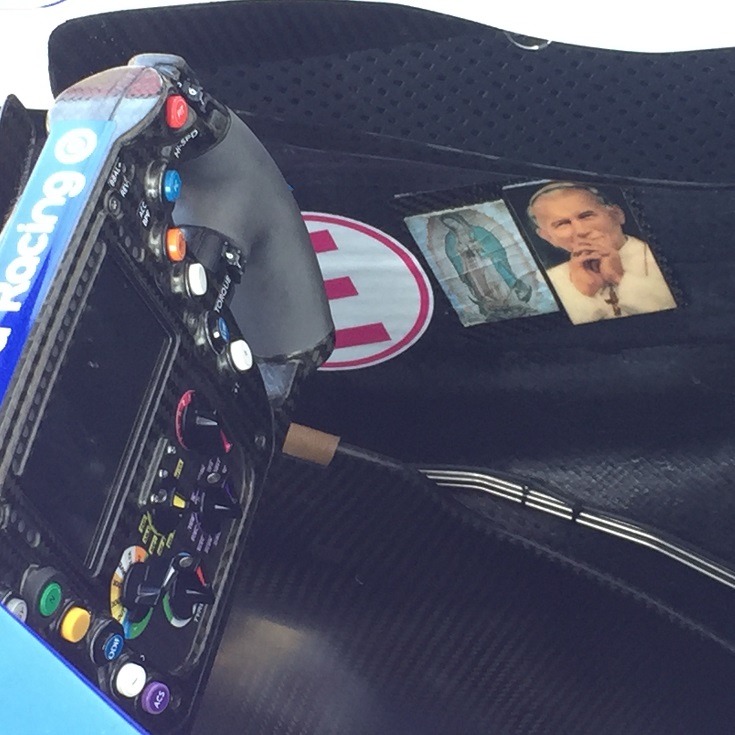 Oh Lord, won’t you buy me a Mercedes (engine)? The divine cockpit of Sergio Perez’s Racing Point. “Checko” has established himself as a bona fide F1 driver and almost won the 2012 Malaysian Grand Prix in a Sauber. His best result in junior Formula racing was second in GP2 in 2010 to another Latin fuego – Maldonado. 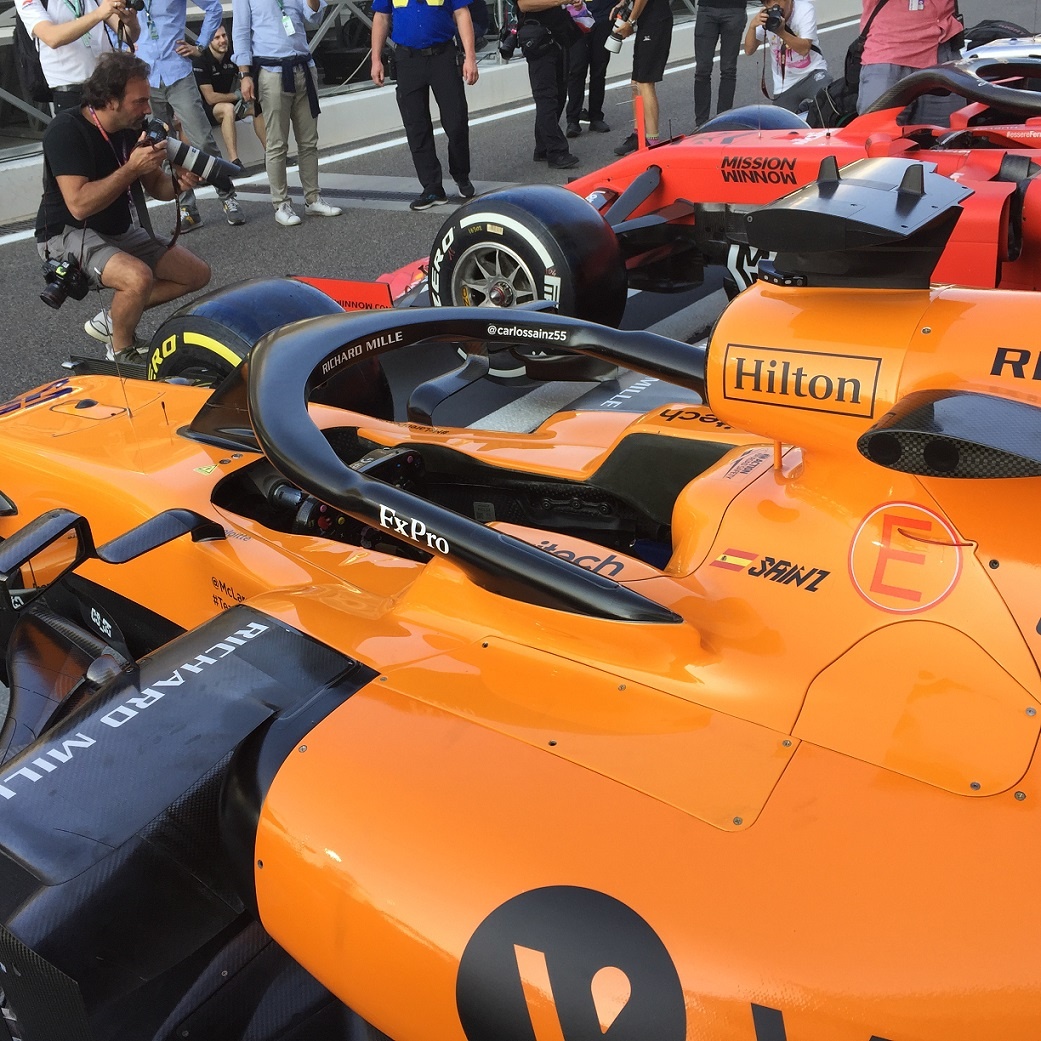 Checked out! McLaren still has a Spanish driver, but now it’s Mini Machismo and self-appointed “Smooth Operator” – Carlos Sainz Jr. The previous round in Brazil saw him take his first ever podium in Formula 1, courtesy of rare bad luck for the Lucky One. With the prevailing lovey dovey for Carlito and Lando, there is no vacancy for the man from Oviedo. 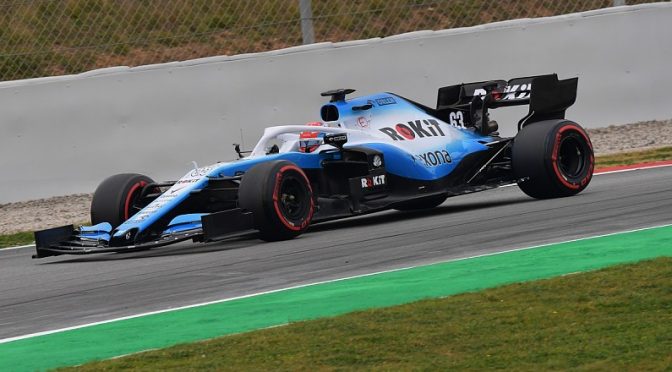 Nicholas has impressed as Reserve Driver this year, conducting several tests and taking part in six FP1 sessions across the season. The 24-year-old has fully integrated himself in his role, spending extensive time working closely with the team both trackside and at the factory, and providing valuable feedback for the development of both the FW42 and FW43.

The Canadian has enjoyed a successful career in junior formulas, winning multiple races in FIA Formula 2 and mounting a strong title challenge in 2019 where he currently sits second ahead of the season finale. Prior to this, he competed in the Formula Renault 3.5 Series and FIA Formula 3 European Championship.

Speaking about the announcement, Nicholas Latifi said; “I am thrilled to be stepping up as Race Driver for 2020. I have thoroughly enjoyed working with the team this year, supporting them with the development of the car, and assisting wherever I can trackside and at the factory. I look forward to the journey ahead with the team, and I am excited to make my Formula One debut at the Australian Grand Prix in 2020.”

Claire Williams, Deputy Team Principal, commented; “I am delighted to announce that Nicholas will be stepping up to the role of Race Driver to partner George in 2020. All of us at Williams have been immensely impressed at what he has achieved this year in FIA Formula 2, along with his commitment to the team, and the work that he has put in behind the scenes. Nicholas has become an established and well-respected member of Williams, and we look forward to him stepping up into this new role, as we look to fight our way back to the midfield. 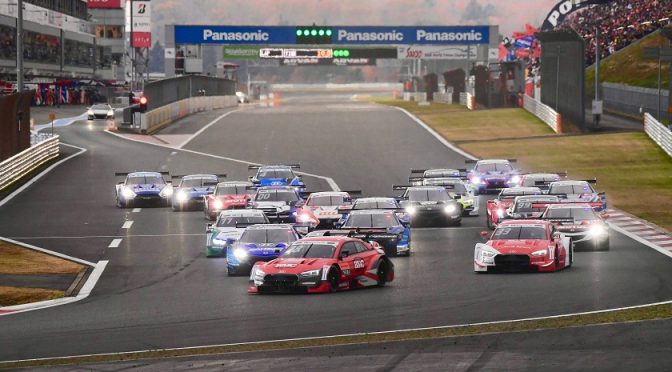 These four cars set the pace at the front until a number of Safety Car periods began to ramp up the pressure, finally causing a series of frantic, multi-car accidents that slimmed down the field and resulted in a nail-biting single-lap charge to the chequered flag.

The first two Safety Car periods were called in order to clear debris resulting from left-rear punctures to Duval and René Rast (Audi RS 5 DTM) – possibly as a result of running a sub-optimal set-up following a lack of dry running this weekend, according to Head of Audi Motorsport Dieter Gass.

At the second restart, two multiple-car accidents took out several SUPER GT runners, including frontrunners Tsukakoshi and Nakajima. A third Safety Car was then called out to clear the increasing amount of carbon-fibre debris left scattered across the racetrack, and to remove James Rossiter’s CALSONIC IMPUL Nissan GT-R, which had rolled to a halt at the first corner with heavy accident damage.

If Karthikeyan was able to successfully manage the pace at the front, it grew increasingly unruly behind him: on the very last lap, Duval and Wittmann scrapped mightily for second, switching positions several times. The Frenchman only took runner-up spot on the chase to the finish line – but was then penalised one second for nudging Wittmann a couple of corners earlier. The top three was separated by just 0.935s, with the German earning second place – appropriately enough on his birthday.

Behind the top three, Yamamoto came home fourth from Kamui Kobayashi (BMW M4 DTM), who drove a hugely spirited race to fifth – on his debut weekend in a DTM car. 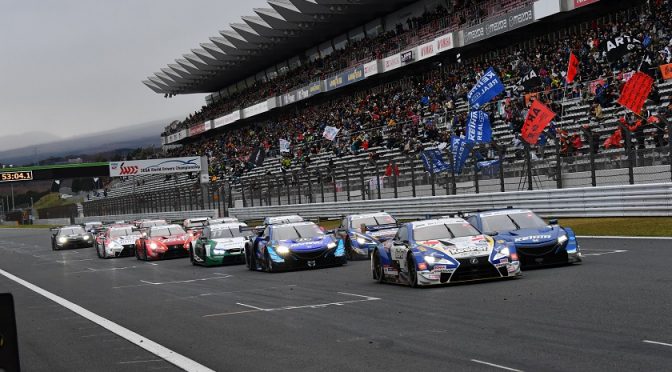 As Cassidy’s lead grew, he was able to recover from a slightly shaky pit-stop where his crew struggled to quickly switch both front wheels. Not even a late-race Safety Car period could halt his progress: despite the novelty of the new-to-SUPER GT Indy Car-style restart, Cassidy held off a late charge from Koudai Tsukakoshi, who finished second in his Keihin Honda NSX-GT, ahead of Yamamoto.

Frenchman Benoît Tréluyer (Audi Sport Japan RS 5 DTM) emerged a slightly surprising victor of the seven-car DTM challenge, finishing sixth after steadily improving across the whole weekend. Behind him, 2019 champion René Rast (Audi Sport RS 5 DTM) finished eighth after spending most of his race embroiled in spirited scraps with a number of drivers, most notably Quintarelli, with whom he enjoyed a ding-dong battle, exchanging position as they fought into the Turn One hairpin.

Mike Rockenfeller (Audi Sport RS 5 DTM) started well from fourth place, but faded during the race, eventually getting pitched into a spin by Tréluyer as the field scrabbled through the tight Dunlop Corner after the restart. The German came home 13th.

BMW’s Kamui Kobayashi was another stand-out performer, enjoying a late-race scrap with Rockenfeller to finish 14th.

Fellow BMW drivers Marco Wittmann and Alex Zanardi both struggled: the German gambled on a first-lap pit-stop, but was later forced to make a second stop, eventually finishing 18th, a lap adrift. Zanardi only narrowly made the race after his crew discovered a technical issue on the installation lap. He was forced into the pits for a lengthy stop during the race, too, eventually rejoining for the closing laps, and finishing eight laps down 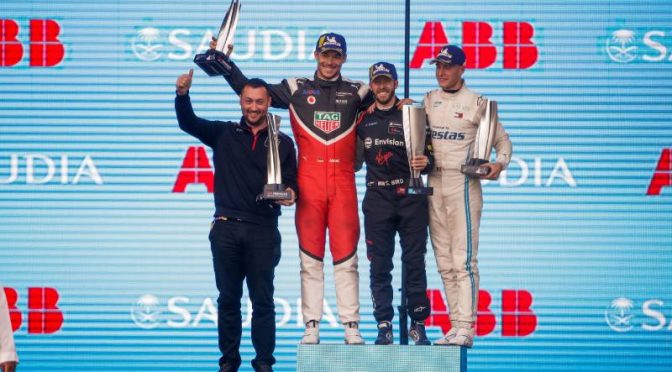 BIRD WINS PORSCHE AND MERCEDES ON THE PODIUM

At the start, polesitter Alexander Sims easily held the lead off the line ahead of Mercedes pair Vandoorne and Nyck de Vries, as Bird harried Venturi Racing’s Edoardo Mortara for fourth in the early stages.

Bird took his first attack mode activation on lap nine of what would become a 34 lap race, briefly dropping to P6 behind Jerome d’Ambrosio (Mahindra Racing) before getting back by on the following tour.

The British driver used his time in the 235kW higher power mode to shoot past Mortara on the run to the Turn 18 – the race’s first corner – on lap 11. 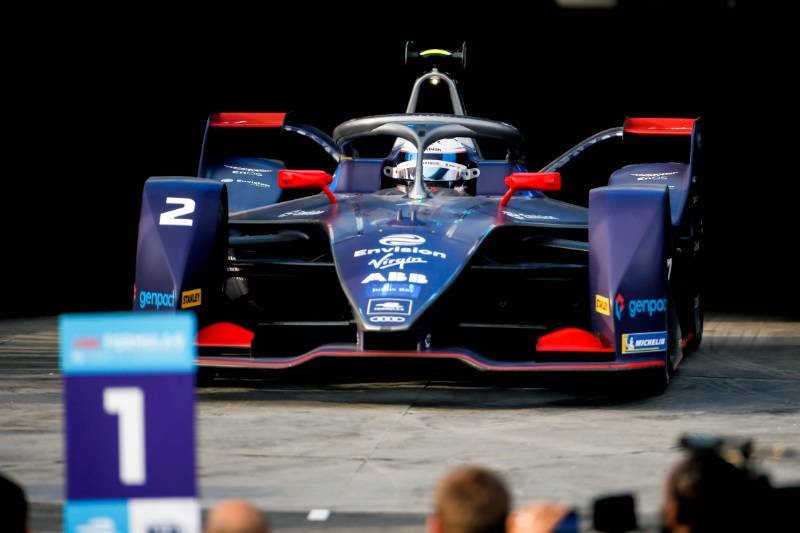 After his initial attack mode activation ended, Bird was able to stay with the Mercedes pair ahead as they in turn chased Sims.

After catching back up to the top three, Bird used his power advantage over de Vries to take third on lap 22 at Turn 18, the right-hand corner at the end of the main straight that easily featured the most action.

But it was on the following lap that the defining moment of the race occurred as Bird caught up to the back of Vandoorne, who then launched his own move on long-time leader Sims at Turn 18 that resulted in a slight touch, which sent them both deep.

Vandoorne was able to get ahead and take the lead, while Bird nipped past Sims to take P2.

Two tours later Sims took his second attack mode and dropped behind Lotterer, who had moved past de Vries when the newly crowned Formula 2 champion moved to take his final activation.