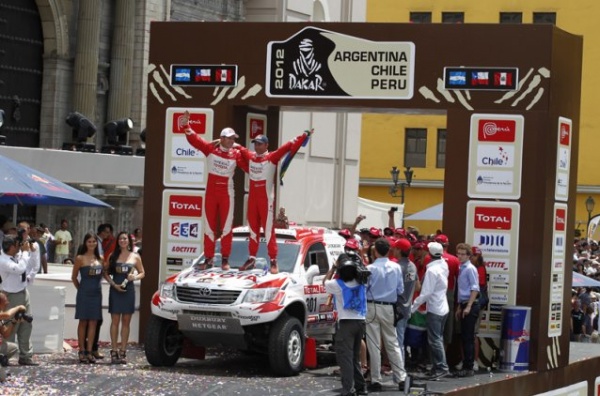 DESPRES AND PETERHANSEL ARE CHAMPIONS

While the last special was won by Norway’s Pâl Anders Ullevâlseter (motorcycles) and Robby Gordon (cars), France’s Cyril Despres and Stéphane Peterhansel took their fourth and tenth Dakars respectively, all categories included. The champions were applauded on the podium on Lima’s Plaza de Armas by a huge crowd which came to acclaim both the competitors and the arrival of the greatest rally raid in the world to Lima’s capital. All in all, 97 motorcycles, 12 quads, 78 cars and 60 trucks made it to the finishing line of the 33rd Dakar, i.e., 249 of the 443 vehicles which started the rally in Mar del Plata.

Advantage Despres… The demonstration was decided at all levels. After covering 8,300 kilometres on roads, courses and dunes since the start in Mar del Plata, the gap between Marc Coma and Cyril Despres is 53’20”. The Frenchman has won his fourth title in Lima… One more than his great rival in the elite of this sport! Once again, the extremely close race between the two champions proved that one has to be an all-rounder in order to win a Dakar: physical stamina is important, navigational mistakes were tiny but enough to decide their duel, their piloting was as good as it was fast, strategy played an important role, the mechanical aspect (on identical KTMs) was well-managed… with a disappointment for Marc Coma: on the eve of the finish, a gearbox breakdown prevented him from fighting on at a time when he was leading the general classification. The Catalan was also forced to replace his engine, which gave rise to a 45-minute penalty pursuant to the new rule. This time loss proved fatal, following a two-week battle in which victories were measured in seconds.

Behind Despres and Coma, the riders vying for a podium spot were never in a position to challenge the title contenders. Strong and consistent Hélder Rodrigues finished the rally in 3rd place, just like last year. He took a stage win but ended up 1 h behind the French champion. He may be able to mount a stronger challenge if he ends up with a Yamaha YZF, which neither David Casteu nor Olivier Pain was able to place at the top of the classification. On the route between Mar del Plata and Lima, those following the motorcycle category discovered that the future of Catalonia no longer rests exclusively on Marc Coma’s shoulders. The breakthrough of this year came from Joan Barreda, who lost all chances of shining in the overall classification at the beginning of the rally (11th at the end) but was still able to leave his mark on the race, with a stage win and eight specials in the Top 5.

Italy’s Alessandro Boturri was the fastest rookie in the Dakar (8th, 2 h 59’04” behind Despres), racing for the new team Bordone-Ferrari, which also placed Jordi Viladoms in fourth. The Catalan clan can be happy, with Laia Sanz taking the win in the ladies’ category. On the other hand, Stéphane Hamard won the classification of riders participating without assistance.

In the car category, everyone expected it to be a Mini affair, since the X-Raid team seemed to have the best hardware and the best drivers… and this was the case! In the end, the Frankfurt-based team won eight stages out of thirteen with four different pilots (with Stéphane Peterhansel taking three). Most importantly, the team was always in command of the overall classification. Therefore, it was no surprise to see the main duel take place between “Peter” and his most experienced teammate, Spain’s Joan “Nani” Roma. Although he took the lead in stage 3, master “Peter” still had to wait until the penultimate stage to get an unassailable advantage. In the end, Stéphane Peterhansel took his fourth win in the car category (the first in South America) with a margin of 41’56” over the Catalan driver, joining Vatanen as the record-holder in the car category. Most importantly, the driver from Vésoul has written yet another chapter in the history of the Dakar with his tenth win, all categories included!

Nevertheless, X-Raid’s irresistible performance cannot hide Robby Gordon’s comeback. Aided by the driving skills of his teammate and defending champion, Qatar’s Nasser Al-Attiyah, and propelled by the raw power of his car (whose compliance with the rules was disputed), the driver from California left his mark on the 33rd edition of the rally, both on the course and in the bivouac, since he was the only pilot able to stand up to the X-Raid tyranny. But, despite his three stage victories, Gordon only managed to finish fifth in the overall classification, more than 2 h 15′ down.

The highlight of the 2012 Dakar was the performance of ever-consistent Giniel de Villiers, with a less boisterous but more effective style. Although his preparation was cut short and the project was still in the making, the South African driver managed to crack a podium place in the very first participation of the new Toyota. This will give him confidence and ambition for the future.

Finally, the win in the two-wheel drive category went to Ronan Chabot and his SMG buggy. He was extremely consistent and beat South Africa’s Mark Corbett by over nine hours. This margin would have made much easier the life of Xavier Foj, the winner of the production category! But once again, the Spaniard had to wait until the final part of the race to open the decisive gap and win the race against his best enemy, Japan’s Jun Mitsuhashi, by 59′.

The statistics of the quad category are misleading. Defending champion Alejandro Patronelli managed to get back-to-back wins. He seized the lead after the Copiapó-Copiapó loop and never let it go. His brother Marcos lost all his chances when he conceded 1 h 20′ in stage 7. But the formal domination of the race by the elder of the brothers from Las Flores was contested throughout the entire rally by another Argentinean: Tomás Maffei. Last year’s seventh-placed pilot took the lead after stages 4 and 5 and was able to cling onto the Patronellis, only losing his second place after stage 9. The list of stage winners is proof of how hotly contested the race was: four for Maffei, including the prestigious finale in Lima, and three for each of the brothers. Behind the terrific trio, Chile’s Ignacio Casale and Uruguay’s Sergio Lafuente round off the Top 5… over six and eight hours back, respectively. The Italo-French pilot Camelia Liparoti went one better than last year, finishing ninth.

Finally, today will go down in history as the first time the Dakar rally was won by Gerard de Rooy and the Italian constructor Iveco. A winning combination which already seemed to have it in the bag at the start in Mar del Plata, such were the means mobilised by the Dutch armada to reach their goals. Nevertheless, the balance was only tipped in favour of De Rooy Jr after stage 9, with the withdrawal of Aleš Loprais due to an accident. The young Czech driver had been able to keep Gerard de Rooy in his sights until then, losing only 15’39” in the general classification. Despite this mano a mano, it was De Rooy who left his mark on the 2012 edition by taking the most stages (5) and leading the race from stage 4 onwards. 25 years after his father Jan, Gerard has written a new chapter of De Rooy history in the Dakar, in a category marked by the failure of the Kamazs to repeat last year’s dominating performance. The overhaul of their management team still has to pay dividends. Eduard Nikolayev’s disqualification for anti-sportive behaviour in stage 4 showed just how difficult the transition is proving to be. Nevertheless, this allowed Andrey Karginov and the reserved Kazakh Artur Ardavichus to shine by taking their maiden victories at the Dakar.