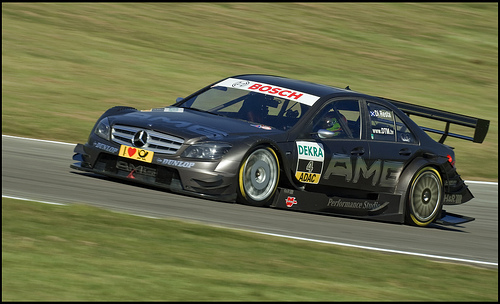 Di Resta reaches for the stars – pole in an action-packed qualifying.

Shanghai: Scot Paul Di Resta has secured himself the best position for the battle for the 2010 DTM title. The Mercedes-Benz driver did the best job in the action-packed qualifying of the DTM season finale at the narrow 2.465 kilometres long street circuit in Shanghai and will be starting from pole position on Sunday at 8.23 h (CET). British driver Gary Paffett will also be starting from the front row, but from second place into the 60 lap race.

Third in the drivers’ standings, Di Resta’s fellow Mercedes-Benz driver also still has title chances. Points’ leader Bruno Spengler (Mercedes-Benz), however, will be facing a difficult task. In the first heat of the four-stage qualifying, the Canadian hit the barriers. Although his car could still be repaired, Spengler failed to improve his time and will only be starting from 17th place. Di Resta said about his fourth pole position of the current season: “It was a very difficult qualifying with little grip. I tried not to take too many risks. First place on the grid is the best position in the battle for the title, but at this track, that can change quickly. One has to be very careful.”

German Timo Scheider was the best-placed Audi driver in qualifying. The reigning DTM champion ended up fourth behind Briton Jamie Green with the 2008-spec AMG Mercedes C-Class. Scheider, who had a crash after the time of the third qualifying heat had elapsed, was sidelined from the fourth and final heat. “Crashing at 220 km/h is not a nice feeling. Fortunately, nothing happened to me. We are now working flat out to get the car ready in time for the race”, Scheider said after qualifying.

The final qualifying of the year brought plenty of action. After the accident of points’ leader Spengler in the first qualifying heat, the session was stopped. According to the regulations, all 18 drivers moved up into the next heat. However, this session was stopped early as well due to a crash by DTM rookie Darryl O’Young (Audi) from Hong Kong. As a result, all the drivers had a chance to battle for grid positions in the third heat. The final session of the four fastest drivers was stopped after a crash by Green. Thus, the classification of the third qualifying heat is decisive for the starting grid positions on Sunday.