Raffaele Marciello (Prema Powerteam) travelled home from Silverstone in the UK with victory in the sixth season round of the FIA Formula 3 European Championship under his belt. At the 5.891 kilometres long Formula 1 track, the Italian beat Felix Rosenqvist (kfzteile24 Mücke Motorsport) in a thrilling battle. The Swede came home second, Alex Lynn (Prema Powerteam) crossed the finish line in third place. With his third victory of the season, Marciello extended his lead in the drivers’ standings to 36.5 points, Rosenqvist is second.

At the start, Felix Rosenqvist stormed into the lead, followed by Alex Lynn and Raffaele Marciello. Some drivers slid off the damp track, which was the reason for the safety car to be deployed for a while. Racing resumed at the start of lap five and on the first kilometres already, Marciello overtook his team-mate Lynn. A few laps later, the Italian had also closed the gap to race leader Rosenqvist and started a close battle with the Mücke driver over several laps. After a few unsuccessful attempts, the protégé of the Ferrari Driver Academy finally managed to overtake the Swede on lap 15.

There was plenty of action behind the two front runners. British driver William Buller (ThreeBond with T-Sport) had to defend his position almost for the entire duration of the race: in the opening stages against Lucas Wolf (URD Rennsport), who did particularly well in the early phase of the race, and then for a long time against his compatriot Jordan King (Carlin). Buller, one of only two drivers in the field to use the ThreeBond Nissan engine, eventually took the chequered flag in fifth place behind Félix Serrallés (Fortec Motorsports). Wolf, on the other hand, dropped back further and further down the order with his rain tyres as the track dried out in the second half of the race and finished 17th.

Raffaele Marciello (Prema Powerteam)
“I was third at the start, but I was able to overtake Alex soon after the safety car phase to move up into second place. Then, I tried to close up to Felix, which I did. The battle for victory with him was tough and overtaking him wasn’t easy. Only when he made a mistake, I was able to get past.”

Felix Rosenqvist (kfzteile24 Mücke Motorsport)
“Raffaele put me under massive pressure and I tried to do everything to bring first place home. I had the impression that I was faster at a damp track, but the more it dried out, the better Raffaele got. With two laps remaining, I made a slight mistake and I lost the lead.”

Alex Lynn (Prema Powerteam)
“To be honest, I am disappointed, because when starting from pole, you want more than third place. Raffaele, Felix and I were clearly faster than the rest of the field, but unfortulately, I was slightly slower than Raffaele and Felix.” 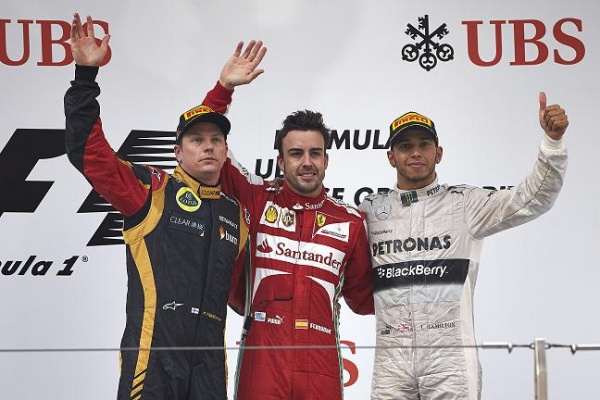 Fernando Alonso was indeed faster than Felipe to take victory on Sunday in a drama-packed Chinese Grand Prix, with the Lotus of Kimi Raikkonen and Mercedes’ Lewis Hamilton holding on for second and third.

A charging Sebastian Vettel came fourth, just 0.2 seconds behind Hamilton, after adopting a different tyre strategy from most of his rivals, while his Red Bull team-mate Mark Webber failed to finish on a dreadful weekend for him.

Alonso said that he was delighted to get his season back on track after retiring early in Malaysia last month. The two-time world champion was second, behind the rejuvenated Raikkonen, in the season-opening race in Melbourne.

“It feels good, it is a long time from my victory here eight years ago,” said the Spaniard, who narrowly lost out to Vettel for the world title last season.

“It was not easy to understand this race sometimes, not an easy race. The risk is there when you overtake.

“This is a good reward for the team after the disappointment in Malaysia. Let’s hope this is now the start of the championship and we need to keep going like that.”

“Second wasn’t quite what we wanted, but in the circumstances it was the best that we could manage today. I’m not 100% happy because we didn’t win, but it is what it is and second place is a good result after a bad start and the incident with Sergio [Perez]. It was quite difficult out there; obviously the car is not designed like that otherwise we would use it all the time, but I was surprised how good it was still. Of course there were some handling issues which was not ideal, but we just had to try to live with it and we still had pretty okay speed.”

Lewis Hamilton
It was a good race for me today and whilst I would have loved the win, I´m really happy with third place and being on the podium for the second race in a row. Fernando and Kimi were just a little bit too fast for us during the race and my tyres were shot at the end trying to keep ahead of Sebastian. I could see his car getting bigger and bigger in my mirrors so it was nice to be able to hang on for the third place. The guys did a great job this weekend to get us where we were; on pole and finishing third. We got the absolute most out of the car we had and that´s very satisfying. We´re not quite there yet in terms of overall pace but everyone is working so hard and I know we can do it.