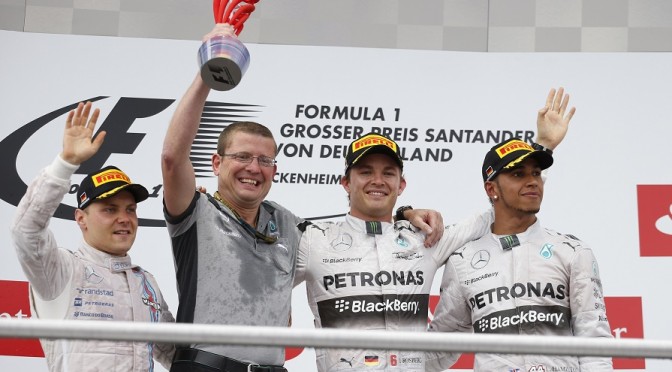 Nico Rosberg took a dominating home victory at the German Grand Prix with Lewis Hamilton finishing in third position, gaining 17 places from the grid. And another podium for Williams driver Vatteri Bottas.

• Nico took his fourth win of 2014 today and the team’s ninth in ten races, taking a lights to flag victory in commanding fashion
• Lewis drove a fantastic race to finish on the podium, gaining seventeen places from his grid position and making a total of 15 on-track overtakes
• Nico ran a two-stop strategy, pitting on laps 15 and 41, running option/prime/prime.
• Lewis converted to a three-stop strategy after sustaining front wing damage, pitting on laps 26, 42 and 50, using prime/prime/option/option
• The team now have more points in the first half of the year (366) than last year’s final total (360)
• Mercedes-Benz power scored its 298th, 299th and 300th F1 podium finishes today; every Mercedes-powered car that finished did so in the points.

Nico Rosberg
Wow, what a great day after so many great events for me this week! I came here hoping for a win and it worked out perfectly. My Silver Arrow was so dominant, thanks to the team for this fantastic car. Before the race I was worried that without the FRIC system the gap in the race would be smaller. But we were again the quickest out there. I did a two stop strategy, which was difficult to manage at the end of the stints as the tyres were almost gone. I’m so happy for Mercedes; it was the first win for many many years in Germany. Thanks for the support here at Hockenheim, the fans were amazing to me. Also at the start I saw a Mexican wave, which was great. Now I look forward to Hungary.

Valtteri Bottas
I am really happy with the way the race went today. As a team we have been unlucky not to have both drivers on the podium as we had the pace. To keep a Mercedes behind at the end of the race was promising showing that it is possible, and the car is very strong. The engineers shared a lot of information with me about the tyres and where Hamilton was and that team work was the key to the good result.
Lewis Hamilton
First of all, congratulations to Nico on winning his home race; it’s a special feeling and I am very proud that we could put both cars on the podium for Mercedes-Benz in Germany and represent for all the Mercedes employees and fans here this weekend. From a personal point of view, I can’t be too ecstatic about the race because it has been a tough weekend for me and I’ve ultimately lost more points to Nico in the championship battle. But I’m grateful that I could limit the damage with a podium finish. When you are sitting on the grid basically in last place, with no other cars in your mirrors, it’s very hard to imagine that you could be standing up there two hours later. I’m so grateful to the team for this car, I really take my hat off to them for building a machine that can put in that kind of performance. To be honest, it was a pretty straightforward race for me, although I had some trouble following what was going on and where I was running at times. I had a nice battle with Kimi early on, when I was lucky not to damage the front wing, then the incident with Jenson was just unfortunate. He has been such a gentleman this year and not given me too much trouble getting past but it was just a misunderstanding today. I wasn’t close enough to try and pass but I was on the inside line in the corner. It looked like he had gone wide, then he cut back across the corner and perhaps he didn’t see me there. I lost quite a bit of downforce with the damage and it made it very hard to look after the front left tyre. I had a lot of understeer and the tyre was degrading fast, which is the reason why we converted from a two-stop strategy to three. Then the team called me in early on the first set of option tyres because we expected a Safety Car to come out – and I was surprised that there wasn’t one, to be honest I caught Valtteri pretty fast in the final laps but he just had too much straightline speed to get past. I’m doing absolutely everything I can to get back on level terms with Nico in the title battle: I can’t focus more or work harder than I am doing right now. This championship is proving a big challenge for me but that’s how I love it – and I wouldn’t have it any other way. 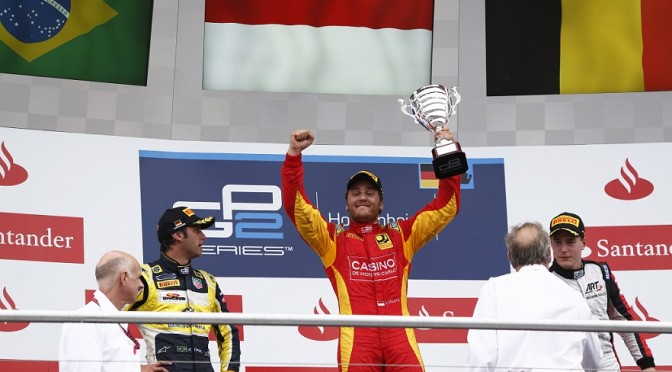 Stefano Coletti rolled the dice when a brief but fierce downpour just before this morning’s sprint race threw everyone’s race plans out the window: with the track still wet, the conservative choice was to start on wet tyres, but the Monegasque driver and the Williams tester Felipe Nasr were among the few drivers to take a gamble on slicks, one which paid well when the pair finished 1-2 ahead of McLaren test driver Stoffel Vandoorne.
At the start the advantage was heavily towards the conservative choice: poleman Nathanaël Berthon easily took the start with the rest of the top 4, including Nasr, struggling to get off the line: Coletti had a comparatively good start but was still swamped as Jolyon Palmer, Mitch Evans and Marco Sorensen stormed past, with Palmer slightly wide at turn one and dropping behind the pair as Johnny Cecotto and Stéphane Richelmi came together: the latter’s car caught fire, prompting a safety car period.
Evans made short work of Berthon at the restart but was clearly on the wrong set up: the New Zealander was unable to do anything to stop Vandoorne at the hairpin next time round and, dropping 2 seconds a lap, soon fell back threw the field. But with the track drying out the question was which lap should they come in? Palmer opened the door by coming in on lap 10, just before Coletti claimed the fastest lap to make it clear that the time was now.
A safety car for a beached Takuya Izawa gave teammate Vandoorne a perfect window to pop in for slicks, emerging with Sorensen just behind the last wet tyre stragglers on track, who disappeared as the race went live: Coletti was just behind the pair at the restart and made the most of his warmer tyres, and familiarity with the conditions, to blast into the lead next time round, with Nasr following suit on the next lap.
For the remainder of the race Coletti and Nasr had a private battle for the win, with the pair swapping fastest laps between them, but the Monegasque driver held the gap of just over a second all the way to the finish line, with Vandoorne the best placed of the wet tyre starters rounding out the podium. Another fine performance from Sorensen saw him finish P4, ahead of a fierce fight between Jon Lancaster, Palmer and Alexander Rossi, with Adrian Quaife-Hobbs claiming the final points position behind them.
Palmer still holds the lead in the drivers’ championship on 168 points to Nasr’s 127, with Cecotto on 100, Coletti moving up to 96, Evans on 92 and Vandoorne on 86 points, while in the teams’ championship DAMS lead on 209 points to Carlin on 193 points. Racing Engineering are third on 125 points, three more than Trident ahead of next week’s round at the Hungaroring.
Hockenheim – Sprint Race 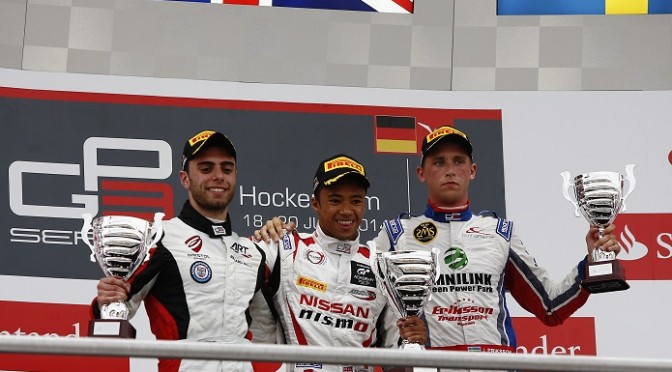 Rookie Jann Mardenborough enjoyed his first taste of champagne in GP3 after recording his debut win and his first rostrum of the season too. The Brit drove a commanding race from reverse pole to see home Dino Zamparelli (ART Grand Prix) and Jimmy Eriksson (Koiranen GP).
Rain threatened Race 2 of the 2014 GP3 Series after light rain fell only minutes before the race got underway but a few drops could not make an impression on a very hot track.
The Arden International driver made a good clean start with Zamparelli stealing a position from Eriksson to sneak into second. Series leader Alex Lynn was also on the move and he was up to fourth, demoting Nick Yelloly (Status Grand Prix).
There was contact on lap one between Sebastian Balthasar (Hilmer Motorsport) and Pal Varhaug (Jenzer Motorsport), the Norwegian driver having to retire from damage sustained in the incident.
Mardenborough held an advantage of just under a second to Zamparelli, with a small gap forming back to Eriksson in third. Red Bull Junior driver Lynn was on the attack and began pressuring the Swede for the rostrum place whilst a juicy battle for P6 developed between Emil Bernstorff (Carlin), Dean Stoneman (Marussia Manor Racing) and Race 1 winner Marvin Kirchhöfer (ART Grand Prix).
Kirchhöfer made contact with Bernstorff, the two collided and both ended their race prematurely in the pitlane. At the midway point of the race, Mardenborough increased his lead at the front to 2.5s, driving a calm race. Stoneman continued to fight through the pack with Yelloly his next victim.
As the laps ticked down with drivers’ managing tyre degradation, nobody was going to stop Mardenborough from pocketing his first win in the category – and the first of the campaign for Arden International after a lights to flag victory. Zamparelli achieved his best result in GP3 with second, whilst Eriksson maintained his consistency with an important podium, keeping his Series rival Lynn at bay in fourth. Stoneman, Yelloly, Patric Niederhauser and Richie Stanaway completed the points’ positions.
Lynn remains on top in the Drivers’ Standings on 112 points with Eriksson closing the gap marginally, the Swede sits on 94. Kirchhofer, Bernstorff and Stanaway complete the top five on 80, 73 and 69 respectively.

Carlin holds the lead in the Teams’ Standings on an impressive 189 points with ART Grand Prix rising to P2 on 125 points, two points ahead of the third placed team Status Grand Prix.

There is no rest for the wicked with GP3 back in action next week at the Hungaroring in Budapest on the 25-27 July.
Hockenheim – Race 2
F1Weekly podcast # 820