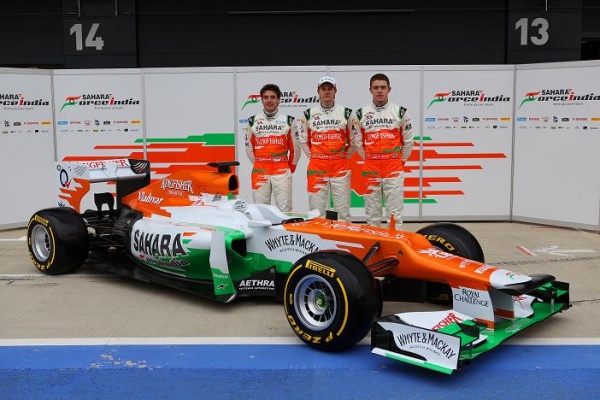 Sahara Force India unveiled its 2012 challenger today as Paul Di Resta and Nico Hulkenberg pulled the covers off the VJM05 at Silverstone. They were joined by reserve driver, Jules Bianchi, as the team’s new car was presented for the first time

The VJM05 is the second car to be created under the watch of Technical Director, Andrew Green, as the team seeks to build on its on its sixth place finish in the constructors’ championship and take the fight to the teams that lie ahead.

“We have set our sights on challenging for fifth place,” explained Team Principal and Managing Director, Dr. Vijay Mallya. “To do so we will need to begin the new campaign by delivering the kind of form we showed in the second half of 2011. I believe this is a realistic goal and that we have the talent and determination to realise these ambitions.”

Chief Operating Officer, Otmar Szafnauer, echoed those sentiments as he praised the team’s efforts to develop the VJM05: “The new car has come together nicely over the winter. We don’t know what our competitors have done, but we’ve made some gains over the winter and believe we’re in reasonable shape. It’s going to be difficult in the midfield, but our focus is on starting strongly and improving our position from last season.”

Summing up the approach to 2012, Andrew Green added: “The car looks more refined; a lot racier and a lot more purposeful. You can start to see the aerodynamic concepts coming through now. It looks quite a bit different to the previous years, and so far the performance in the tunnel has been encouraging.”

The drivers were delighted to get their first glimpse of the new car and set out their hopes for the season ahead:

Paul Di Resta: “Seeing the new car built and complete for the first time is always an exciting moment. It’s when you realise that all the waiting is finally over and the season is beginning for real. I’ve had a good winter and I’ve recharged my batteries, but now I’m fully focussed on 2012 and looking forward to the start of testing. There’s a really positive feeling in the team, good stability and hopefully we can pick up where we left off at the end of last year.”

Nico Hulkenberg: “I saw the new car in the wind tunnel a few times and followed its progress during the winter. It looks aggressive and fast, but we won’t know where we stand until we get out there and compete against the others. Preparations for the new season have been full-on with simulator sessions and lots of fitness training. I feel ready to get back to racing and I’m excited to find out what the new car feels like next week.”

Di Resta and Spengler score a 1-2 for Mercedes-Benz

Oschersleben. Paul Di Resta (Mercedes-Benz) celebrated his second win in a row in the
eighth DTM season round at the Motorsport Arena Oschersleben. After 50 laps at the
3.696 kilometres long track in the region around Magdeburg, he crossed the finish line
in first place with his AMG Mercedes C-Class. Bruno Spengler (Mercedes-Benz) completed the 1-2 for the manufacturer from Stuttgart.

Mattias Ekström (Audi) secured the final podium slot at Oschersleben by finishing third. In fourth place, Gary Paffett (Mercedes-Benz) only just missed out on a podium finish. The best-placed driver
of a 2008-spec car was Mike Rockenfeller (Audi), who ended up fifth ahead of his fellow
Audi driver Alexandre Prémat. Jamie Green (Mercedes-Benz) and Martin Tomczyk
(Audi) also scored points in seventh and eighth place respectively.