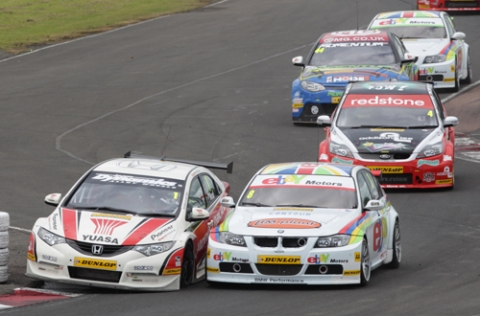 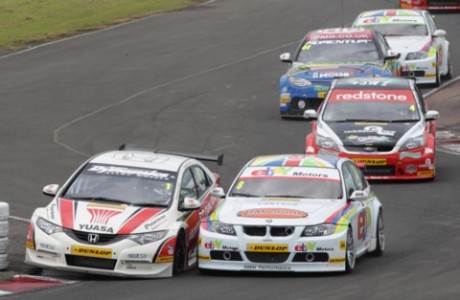 Matt Neal, Gordon Shedden and Jason Plato shared the wins in today’s three Dunlop MSA British Touring Car Championship races at Croft Circuit which were full of incident, drama and controversy. It is Neal who tonight leaves the North Yorkshire venue leading the standings by just a point from Honda team-mate Shedden as the championship enters a lengthy summer break before resuming at Norfolk’s Snetterton circuit on the weekend of 11/12 August.
Worcestershire’s Neal set the fastest time in Saturday’s qualifying session to take pole position for the first of today’s races in his Honda Yuasa Racing Team Civic. He dropped to third at the start but fought back to win ahead of eBay Motors BMW driver Robert Collard and Shedden and take over at the top of the points table.
Fife’s Shedden then responded with victory in the second race to re-claim the championship lead. Neal took the runners-up spot to complete a 1-2 result for Honda – it was also the seventh win in a row for the Team Dynamics-prepared factory Civics. Behind, Rob Austin took his first podium result of the season in third in his Rob Austin Racing Audi A4.
Having missed the first race because of mechanical problems with his car, Oxford’s Plato, who hails from Newcastle-upon-Tyne, won race three to end a six-year wins drought in front of his ‘home crowd’. Tom Onslow-Cole’s eBay Motors BMW and Andrew Jordan’s Pirtek Racing Honda Civic were second and third.
Fourth place for Neal was enough to move him back ahead in the title race from Shedden who finished the race in sixth. Plato remains third in the standings, some 29 points – 20 are awarded per race win – adrift of Neal.
Neal’s win today was his fourth of the season and the reigning Champion commented: “I’m very pleased but all it does is give me the bragging rights for the next seven weeks before we get back to business. Plus maximum success ballast in my car for Snetterton! Our car, the Civic, is in a class of its own under braking and through the corners but we need to test during the break because Jason and Triple Eight Race Engineering who run the MG will come out all guns blazing in the second half of the season.”

Dalgety Bay’s Shedden, now with an unrivalled six wins in 2012, said: “I don’t mind being second at this stage – the lead is going to keep on changing hands all the way until Finals Day in October. It’s great to get another win but it’s all about scoring as well as possible in every race. I think I’ve achieved that today so job done.”

Double Champion Plato’s win was his second this year and he added: “Today’s win was crucial in making sure we keep the Hondas in sight but, as a team, we are still learning about the MG6. It’s important we manage our expectations but we have a few test days planned for the break and that will enable me to get more comfortable with the car and for the engineers to work their magic. I think we can still find another second per lap.”
Meanwhile Honda/Dynamics and the Honda Yuasa Racing Team have significantly increased their respective leads in the Manufacturers/Constructors and HiQ Teams championships. Jordan continues to lead the Independent Drivers Trophy but only just from Collard. eBay Motors has leapt from third to first in the Independent Teams Trophy ahead of Pirtek Racing which is just two points behind.
Elsewhere officials punished a number of drivers for on-track incidents during the weekend. Ollie Jackson received two penalty points on his competition licence and an official reprimand following an incident in race one involving Tony Gilham. Jackson was then handed the same penalty again after race three for an incident involving Chris James. Officials also took action after reviewing incidents in the third race at Oulton Park two weeks ago. Dave Newsham received two penalty points on his licence and an official reprimand for an incident involving Daniel Welch. Robert Collard was similarly punished for an incident involving Andrew Jordan and also received a verbal warning for a separate incident involving Mat Jackson. Will Bratt and Adam Morgan were given verbal warnings for an incident between them. 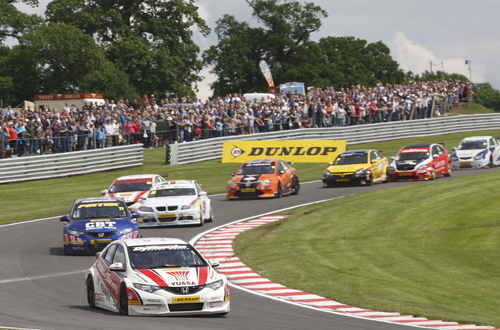 Honda team-mates Matt Neal and Gordon Shedden shared the wins in three incident-packed Dunlop MSA British Touring Car Championship races at Oulton Park today. And it is Scotsman Shedden who leaves the Cheshire circuit the new championship leader as the BTCC now heads to the challenging Croft circuit in North Yorkshire for its next three races of 2012 on the weekend of 23/24 June.

It was then Shedden’s turn to win in race two as Lichfield’s Jordan took another second place finish. Plato, from the back of the grid, took third after a stunning drive through the pack while a career-best fourth was Fleet’s Daniel Welch in his Welch Motorsport Proton Persona.

As a result Fife racer Shedden tonight leads the title race by five points from Worcestershire team-mate Neal. Oxford’s Plato, who had led going into today’s three races, has fallen to third, seven points behind Neal.

“It’s been a very topsy-turvy day with no-one really able to put together three strong races and, if I’m honest, I’m a little surprised to be leading,” commented Shedden from Dalgety Bay. “I’ll take points on the board any day but it means my car will go into the Croft event with maximum ballast which will make it very tough to qualify well there.”

Reigning Champion Neal from Shenstone added: “I never expected a win at all today – I really thought Jason was going to have it his own way – so for two to come along is a real surprise. If he can have a problem, though, it just goes to show how quickly it can turn around and there’s still a very long way to go in the season.”

And said Plato: “After the non-start in race one it was all about damage limitation after that and that meant a few risks, but the race two result from the back of the grid was very enjoyable. Second in that third race was also very important as it keeps us right in the hunt going to Croft.”

Elsewhere Honda/Dynamics and the Honda Yuasa Racing Team have increased their leads in the Manufacturers/Constructors and HiQ Teams championships. Jordan has moved into the lead of the Independent Drivers Trophy table. But it is Redstone Racing which continues to head the Independent Teams Trophy standings.

Meanwhile Nick Foster and Chris James each received official reprimands and two penalty points on their competition licences for collisions in Oulton’s first race, with Aron Smith and Tony Hughes respectively. Mat Jackson was identically punished after a collision with Robert Collard in race two and received the same again following a clash with Daniel Welch in race three.